With the pitch being covered through the week the hope was that the Brunton Park playing surface would have a fighting chance for tomorrow’s game against Leyton Orient, but dipping temperatures meant an early inspection was required as club officials feared the worst, with more minus numbers forecast for tonight. 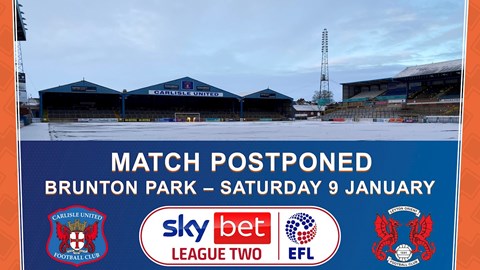 And those worst fears were confirmed at the midday check when the game was knocked on the head when firm patches were discovered beneath the covers.

Speaking about the call-off at his afternoon press conference, manager Chris Beech joked: “With the game being off I’m thinking a snowball fight and a bit of rest.

“In all seriousness it had to be called off because it’s pretty cold in Carlisle and it’s due to be -8 tonight. On top of that it’s been cold all week.

“We’ve had the covers on the pitch but it’s been that cold for such an extended period that it hasn’t made any difference with us doing that. With Orient coming today we had the referee out, so that we could help them with their travel thoughts, and with the way things are it doesn’t matter when they set off, the pitch is still going to be rock hard.

“It’s massively disappointing because we love playing at home and we now can’t do it tomorrow. We’ll accept it and move on, because that’s what we do. It gives us a little bit more time to prepare for Harrogate.”

And with the weather being bad since last weekend, he confirmed that finding ways to train had been challenging, if not at times close to impossible.

“It’s been hard, real hard,” he told us. “It was a bit touch and go at Walsall, they had burning bins on the pitch, the groundstaff did great to get the game on nd the pitch actually played really well.

“Unfortunately the weather hasn’t given up, especially further up north. It’s got worse, if anything, and we’re in for a cold night tonight from what I can gather. The pitch is very hard, Dave’s done his best, he’s covered it, snow on top of the covers - there’s just no chance. We haven’t got undersoil heating, so game off.”

On how he’ll now utilise the weekend, he said: “Actually I’ve got my team picked for tomorrow while I’ve got a training plan for the game off, so we just go to Plan B.

“That’s to train very hard for the next couple of hours and they’ll need the rest after this training session, because it’s good to work hard. A fast car wants to be driven quick, a boxer likes to be challenged and train fast, footballers like to be motivated to train very hard, to stay to high elite standards. We’re going to push them today and then give them a couple of days rest.

“All football players want to play football because it’s what matters. Match day is the most important day of the week because you can earn three points. We all look forward to games, but all we can do now is prepare for Tuesday’s game at Harrogate.

“We can’t play tomorrow, that’s how it is, so we just get on with doing what we can to make sure we stay as ready as we can be for the next game.”