Attacking midfielder Jamie Armstrong was another of United’s young crop of players to make it through to his first professional deal this term, receiving the news of his contract offer just days before the Covid-19 lockdown brought an end to the 2019/20 season.

Speaking about it this week, he told us: “It feels amazing to have been given a contract. I’m so happy and grateful to be getting the chance to prove myself and to hopefully go as far as I can.

“I know it’s a bit of a cliché and everyone says it, but the hard work does start now. I know that, it’s been made clear by everybody who has spoken to me, and I’m really looking forward to getting going again, whenever that might be.”

The all-action playmaker found himself in a slightly different situation to the other graduates in February when a group of four – Charlie Barnes, Charlie Birch, Liam Lightfoot and Tom Wilson – were given early offers as they also successfully completed their two-year scholarship period.

“The other lads got their contract offers before me, but I didn’t let that affect me at all,” he explained. “If anything it made me work even harder to make sure I didn’t miss out.

“I really wanted to join them and prove that I was worth a contract. I feel like that experience of having to keep my head down and stay focused has made me a better player.

“When I got told I was being offered a contract it was just great to finally hear the news. I always believed in myself, but you can never be sure until you actually get told. The delay made it even better when I told my mum and everyone because they were all so proud of me.

“It was a relief, of course it was, because you do wonder which way it will go. The gaffer has told me to push on and prove myself next year, so I need to make sure I’m ready to take any opportunities to show what I can do that come my way.”

Having come through the academy ranks from a very young age, he said: “I’ve been with the club for such a long time, so it does feel extra special to now be part of the first team squad.

“It’s what every young lad wants and I think that’s why we all say it’s like a dream come true. Having so many of the other lads who I’ve been through the academy with going into the first team at the same time as me will make the transition easier because we’ve all been through the same things to get to where we are.

“We’ve been together for ages so it’s really nice to be with them still. We all love working together and pushing each other on, so next season will be no different. The next step for me is to become an important part of the club and to try to show the fans what I can do. 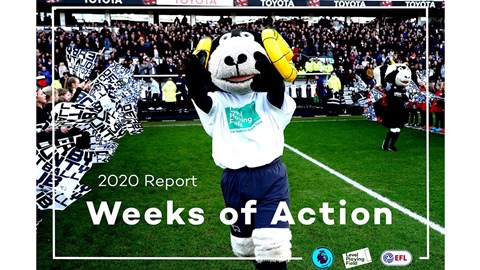 “Football is all about being confident in your own ability and I think if you can bring that confidence out as much as possible then you can really start to give the manager and staff something to think about.”

“It goes without saying that all of the academy staff have been brilliant,” he added. “From Eric and Mark Birch last season to the coaches I’ve worked with in the age groups, I know they’re just as pleased as I am.

“All of the younger players get so much support and it’s a big part of why we make it through. It’s a club that gives youth a chance and you learn a lot because of that. I’ve obviously played in reserve games with the pros and trained with them quite a bit, and I feel like it brings the best out in me as a player.

“I feel better playing with more experienced players and they’re always helping you and telling you where to be, and things like that, which helps. I’ll be with them every day once we get back so I can only see myself learning even more.”

And for those who possibly haven’t seen him play yet, he said: “I’d class myself as an attacking midfielder or forward. I like to think I’m skilful and I can score goals and provide assists as well as being good on set pieces. The same as for anybody who plays up front I love scoring goals especially.

“My first target for next season is to go back as fit as I can possibly be. After that I just want to show the manager that I’m good enough, which will hopefully mean I get an opportunity to get on the pitch and show the fans that as well.

“I think lockdown has probably meant that I’ve been working harder than I normally would. I feel like it’s a really good chance for us young lads to go back fitter, stronger and better than we would have been able to be if we’d just had the normal close season.

“We obviously don’t know when we’ll be back yet so we’ve just got to make sure we’re ready for it whenever it comes. I already feel ready for whenever that is. Hopefully we can get off to a good start and do well in the league next year.”