Saturday takes the Blues on the relatively short trip to Oldham where they’ll come up against some very familiar faces in their latest League Two encounter – not least the management team of John Sheridan and Tommy Wright. 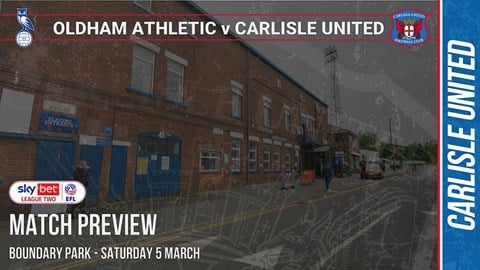 Sheridan, now into his sixth stint as boss at Boundary Park, has twice saved the latest from relegation previously, and has guided the team through a consistent run of seven games unbeaten this time round.

“There’s no doubt it’ll be a tough game,” Carlisle boss Paul Simpson said. “Shez gets his teams working, they’ve got a really simple way of playing, but they’re really effective at it.

“They’ve had a good run of results, they were a little bit unfortunate the other night where they conceded a goal from a deflected cross type thing.

“We know it will be tough, but we’re going into it full of confidence and belief on the back of two really strong performances.

“I’ve said it a lot this week already but I really want us to be in more control and pass the ball better.

“I’m not saying it’s going to be silky football that you see in the Champions League, but I still think we’ve got players who can show more control than we are at the moment.”

A complete flip in mood from just over a week ago sees the players heading into the facing a different kind of challenge - dealing with their own expectation of getting the win.

“I haven’t spoken to them about that, and the only thing I’ve said is that it’s really easy in life to criticise,” he commented. “I don’t think there are enough times when we tell people they’ve done well, so I made a point of telling them this morning that they’re doing really well.

“I did tell them that there are times when that won’t be the case, and I’ll be pulling them up, but they need to know at the moment that they’ve done ok and that it needs to carry on. 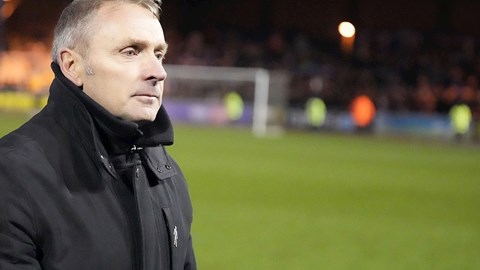 “It’s now 13 games to go and I said after Orient that one swallow doesn’t make a summer, and neither do two. All we can do is keep the season going and make sure we do the right things.

“There’s something developing in terms of team spirit and credit to the players because they were trying to do that before I came in the building.

“I spoke to a couple of them on Wednesday to find out what they were trying to do, because it can all be about the manager and it being his fault.

“They said they were trying to bring everybody together because they realised there was a bulk of players who came in through January and it is difficult when that happens.

“They’ve tried to address things from before I came in, and I honestly do believe that team spirit comes from winning games. It doesn’t come from going bowling, or any of that, even though those things do help.

“It comes from being out on the grass and knowing that your mate has got your back when it isn’t going that well.

“It’s knowing you’ll get praised for doing it right and questioned in the right way if you do it wrong. If you look at the last two games you can see them encouraging each other after almost every tackle or block, and that’s what gets them believing in each other.”

Casting an eye at the league table brings an immediate temptation to talk about six-pointers, but the new gaffer was clear as to what he thinks about the game. 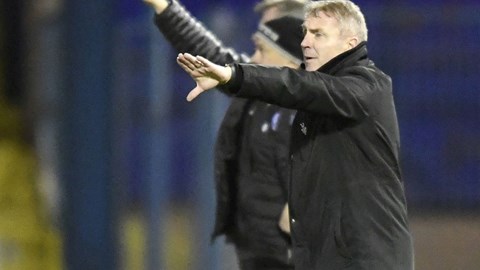 MANAGER: The clean sheets are massive for them

“That saying always makes me laugh, it gets rolled out all the time,” he told us. “I understand what people mean by it, maybe I’m just a miserable sod because I don’t believe in it.

“It would obviously be a really big three points if we can get them. It would give us three wins and that is no mean feat. If we could get three wins, it would make this a top week, not just a good week.

“We’re going to play a good team with a good manager. I like Shez and Tommy and it’ll be good to see them.

“I just hope Shez is losing his head and moaning like hell on the touchline on Saturday which would mean we’re on top in the game and we’ll hopefully get a result out of it.

“I’ve looked at Oldham and I’ve got the clips from their last couple of games, and I’ve got reports on them. It really is about us going there and doing their jobs properly.

“We’ve just got to go there and carry on doing what we’ve been doing because it’s been working so far.”

But looking again at the run Oldham are enjoying, he said: “They’ll be up for it without any shadow of a doubt. You can see that in the games so far, or the last two anyway.

“They’re playing some good stuff, they’re really effective and causing a lot of problems. I’m just hoping they’ve had their crest of a wave and we’re just starting on it, and we’ve just got to go and do our jobs. 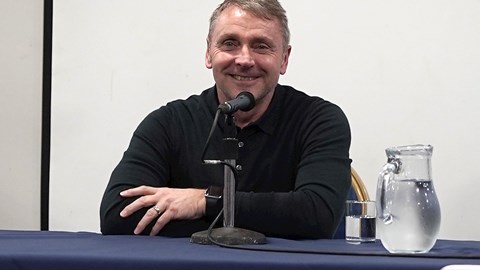 “We’ve done that by looking at ourselves for the majority of our preparation and we’ll do that again going into the weekend.

“We want to pick up some momentum, if at all possible, because that can be huge. It is a ridiculous thing.

“When I was at the FA we had a full-day workshop on looking at momentum and seeing how we can grab momentum back when we’re struggling, how we can stop teams from taking it back off us when we’re doing it really well.

“We couldn’t actually come up with any answers, we spent the whole day discussing it, all the national coaches, everybody, we just couldn’t come up with a solution to what it is.

“It’s a really powerful thing but nobody actually has the answer. A lot of it is psychological, there’s obviously ability in there, but it’s also a bit of luck as well.

“When you get it you have to enjoy and make the most of it. You often find when you haven’t got that momentum all the luck goes against you as well.”

Somewhere between 1,100 and 1,500 travelling fans are expected to make the trip on Saturday, possibly more, with the gaffer pleased at the response to his call for positivity over the course of the last week.

“It’s up to the players, they’ve gone out and been brilliant. It’s easy to question commitment when you’re at the bottom of the table, but there’s no reason why that can’t be there.

“The opposition can stop you playing well but nobody can stop you from running, working, tackling and being committed.

“The players have done that so far, and we’ve just got to keep doing it going forward as a whole group.

“We’re going to have a big support and I’m sure they’ll give us their backing. The players have just got to respond to it.

“On Tuesday night, the fans gave them a lift, but we have to give the fans something to be lifted by as well. It’s got to be a two-fold thing.

“If both us and the fans all go with a positive mindset, and make that decision to be positive … I always say … it was a guy who I worked with at Blackpool, Steve Black, who just died last week.