The eagle-eyed in the ground on Saturday will have noticed a change to the formation at the second half as manager Paul Simpson looked to make life harder for a Northampton who had threatened without taking control in a nip and tuck encounter. 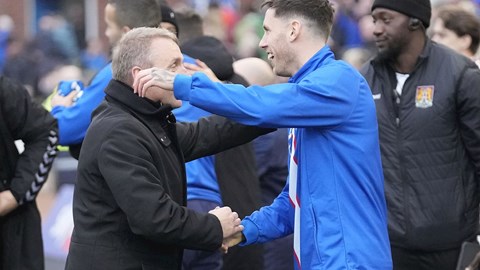 “We were getting too many balls played forward against us in the first half, and that was causing us issues,” he explained. “We changed it and we went with Jon Mellish as like a front sweeper, as opposed to part of a back three, to see if he could take care of Lewis.

“As it was they made a sub and it was Rose who took that role. We dealt with it, and then we changed it back to shore it up again, because they had a front five or six, or whatever it was.

“That change, I’m going to give that credit to me and the staff for doing that because we had a chat about it. We’d actually spoken about it before the break, but I felt it was a little too much information to get across during the game.

“I was just praying that we got in at 0-0 so that we could address it then. The substitutions, I’m sorry but that’s just luck.

“Who knows that Brennan will use his strength and find that pass, or that Tobi is going to show that kind of composure. I’m delighted, but there’s a bit of luck there as well with that kind of thing.” 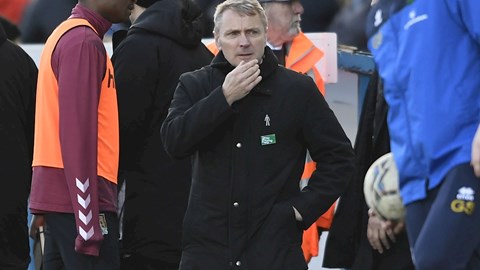 MANAGER: Our game management was brilliant

And the manager revealed that his staff are playing a big part in helping to make these key decisions, with everybody pulling in the same direction.

“All of the staff are playing a part,” he said. “It isn’t just about me, it’s about the group. I’ve said it before, it’s the girls in the laundry doing the kit and Sam who does the cleaning, to Colin with all his stuff.

“The immediate staff of Greg, Jacob, Ross, they all help the players. That’s what we’re all here for, everything we do is to get the players as good as possible.

“Everybody will have a much better weekend than they have been doing off the back of a result like this. We’re there to make it as professional, as comfortable and as organised as we possibly can.

“Credit to all the staff because they’re doing that at the moment and making my job really easy. The office staff have all played a massive part in generating the support and in getting people here.

“The hashtag #WhateverItTakes, whoever came up with that, I thought it was quite interesting to do it, and it worked.

“The scheme to ask people to donate tickets and those sorts of things caught people’s imagination. My son tried to get involved with that from down in London, but there was none left, so he couldn’t. 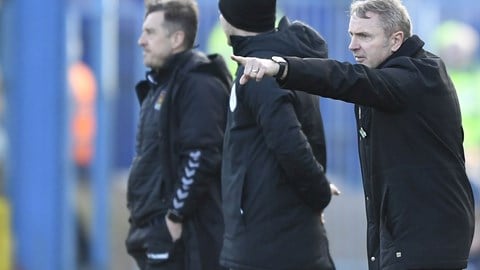 MANAGER: It’s fantastic how the fans have been

“Everybody is digging in because everybody knows how important it is for our football club to stay in this league, so they’re all chipping in.

“When you win games it makes it easier for the coaching staff to have a good weekend, and hopefully it’s an easier place for the office staff to be as well.

“I said we needed a performance and an atmosphere, and we got it, because we needed to encourage people to come back. We did that, so let’s get them here again and let’s all enjoy the end of the season.”

“This kind of reaction is brilliant and it’s what you’re in football for. I keep saying that. It’s about doing in front of a crowd and in an atmosphere.

“They were nervy in the first half, but they dealt with it really well after the break. I actually think a point would have been a reward, but to take three is massive.” 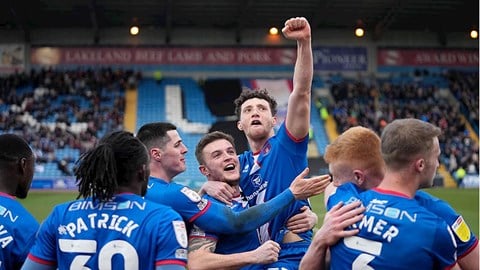 To have gone from second bottom to nine points clear in such a short space of time raises the obvious question of where the team can go from here.

“I haven’t got a clue because I don’t know what the table looks like,” he responded. “What I’m hoping for is 11 games of positivity, that’s all I want.

“Wherever it takes us, good, let’s just see. We have to finish the season strong. I don’t want us to dip and falter. I don’t want poor performances and anxiety.

“If the fans are unhappy they stop coming, and I don’t want that. We’ve got to make it a really good place to be and when it comes to the summer all of the decisions that need to be made will be made in a much more positive environment.

“At the moment we can enjoy what’s happened recently. I don’t think anybody understands the emotions you go through.

“I still say to this day that the best feeling you can have as a parent is watching a birth. I’d even go so far as to say my wedding day, those things are unbelievable moments, but when you’re in football nothing pricks the emotion like winning games in an atmosphere like this.

“It’s actually hard not to get emotional about it when you come to the end of the game, trying to keep your head. You’re trying to get messages on to them when they’re all going crazy and jumping into the crowd, because it’s all so incredible. Hopefully we can get 11 more just like it.

“I’ve said before that I had no idea what I was coming into, it was a gamble I had to take, I had to give myself a chance. How can you not enjoy four wins out of four, I’m absolutely delighted.”

“And to win against a team at the top, we have to take confidence from it,” he concluded. “When I looked at the fixtures when I came in I think there was something like seven or eight games against teams in the bottom half, and before today it was six top and six bottom.

“It was really important that we win our games and at least not lose our games against the teams down with us. On top of that we need to pick up whatever we can against the top half, and we’ve put a little bit of a marker down now.

“The players have shown themselves that they can lay a glove on the top teams, and that’s important. Yes we had to scrap, yes you need to ride your luck, but we’ve also had some moments of quality ourselves.

“They’ve shown the ability they’ve got, and they’ve added a desire to get results to it. Now it has to carry on, and we’ll all do what we can to make that happen.”