United rattled up 17 goals through their early run of pre-season games and, even with one eye on the opposition not being of the full-time variety, it still ranks as one of the good habits manager Paul Simpson is trying to instil in his squad. 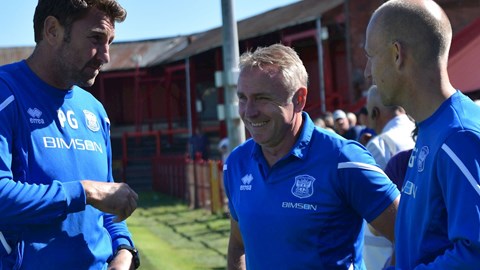 MANAGER: I'm really pleased with them

It almost goes without saying that goals and clean sheets bring confidence which, in turn, tends to bring more goals and more clean sheets, with the emphasis currently on work rate as well as hitting the levels of quality that will be expected once the season kicks in.

“In any game you want goals and a clean sheet,” the manager said. “It’s what you want to do. They’ve got to get into the habit of that, just like as a football club we got into the bad habit of losing games last season, it’s also very easy to get the good habit of winning.

“Everybody likes that feeling, and we’re getting to a point at the moment where I like our structure, as we had in the first half of the Kendal game.

“We passed it well, we had good shape, and when we keep the ball we’ve got a discipline about our shape. The wing backs have complemented that and we’ve looked a strong side.

“The Workington game was a step up, and with the training game on Tuesday then Bolton on Saturday, and the one up in Largs, it’ll build up again.

“The opposition in those games are a step up in ability levels, and that will test us in a different way. That’s when the shape and discipline of the team will come to the front.”

“The good thing is I can certainly see them coming together as a group,” he continued. “I think that if they weren’t as together as they are then we wouldn’t have seen the level of performances we’ve seen, and also the demands they’re making on each other during training.

“We need more of it, and in our training session on Friday I had to speak to the team that was getting rolled over about the fact that it was where we needed leaders to step up and to try and grab hold of it to get some level of control back. 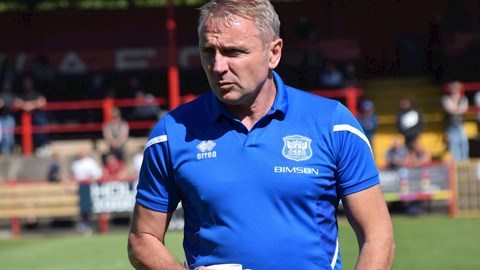 “Momentum is a really big thing in football, and when things are going well people often ask what momentum actually means, and there’s no answer.

“I don’t know what causes it, but when the momentum goes against you it’s really hard to stop that as well. I’ve talked about this before, but we had a full two days at the FA trying to work out what the best way to keep momentum is, or the best way to regain it, and we couldn’t come up with an answer.

“It’s not easy, but if you’ve got leaders in your group then they can deal with the situation and they can talk, organise and try to nip it in the bud.”

Helping to capitalise on the current feelings of positivity has been the high tempo approach from the squad in front of the fans at the three local friendlies.

“I’ve been really pleased and I think the biggest thing for me is the way the players have applied themselves,” he told us. “You obviously like winning, scoring goals, keeping a clean sheet, but it’s not really about results at the moment, but how the players go and do the work.

“It really is just an extension of our training session. The way the lads have gone about it has been first class and I can’t ask any more of them so far.

“It’s not about the result, it’s about putting the work in to actually get them fit for the start of the season, because when it comes to the first game we have to be able to play with a level of intensity in and out of possession, and the best way to practice that is to actually do it.

“You can’t simulate it as well in training, so as we build up through the level of opposition, I think the players will start to get tested a lot more, and hopefully they’ll be able to benefit from the groundwork we’ve put in place so far.”

And also getting benefit from the intense work have been youth second years Nic Bollado, Ryan Carr and Kai Nugent, who have featured in all three games so far.

“I’ve been really encouraged,” he told us. “They’ve come in and held their own, certainly haven’t let us down. It’s really good experience, not just playing in the games but also training every day with pros.

“There’s bigger demands on them when they’re training with the first team. I know they’ve suffered at times for it because they’re shattered, but that’s good. Hopefully they’ll benefit from it.

“I think what’s pleased me more is the level of maturity they’ve gone about the training and games. They just have to keep it going now. Who knows. I’ve probably got it in my mind that a League Two game is a step too far, but you never know.

“Between now and July 30 they’ve got some stronger opposition coming, and if they continue to hold their own they’ll certainly play their way into my thoughts.

“The only knock-on is that the youth team are going into their games with a really depleted group. The game up at Queens last week, they got smashed by a much older side than they were.

“We had under 16s and they had U19s and a 20-year-old playing. The difference in the physical development between 16 and 19-year-olds is absolutely enormous.

“The youth team are suffering from us having a few of them with us, but it’s really good for the lads who are involved.”