The gap to the bottom two spots in League Two widened to 13 points for the Blues following their dramatic late point-earning equaliser at Prenton Park on Saturday, but manager Paul Simpson insisted once again that’s it maths and not permutations that matter. 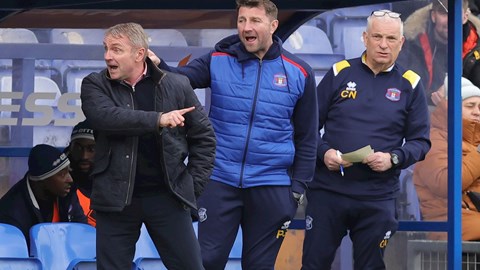 MANAGER: The reward for following things in

“I’m sorry but we’re not safe,” he said. “I still think we need to keep going. Stevenage have still got a game in hand, and I think that’s against Mansfield because it got called off the other week.

“We’ve got a really big game at home against Exeter which will be a right tough game for us. We have to make sure every single one of us is fully prepared next week.

“We simply won’t allow the players to think it’s done, because it isn’t. We’re still in a good position, don’t get me wrong, you don’t need to be a genius to look at the table and think we’re in a good position. We are.

“We’ve earned that right to be in a good position but there are still a lot of points to play for. But as I keep saying, and people will get sick of me saying, we’ve got a duty of care to do it properly as professional footballers. 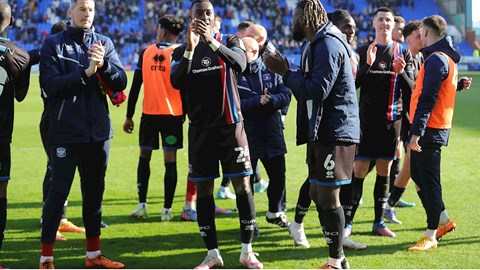 “That last game away at Bradford, that’s a place where there’s always a good atmosphere, a good crowd, coming up against a top, top bloke in Mark Hughes, and I really want us to spoil their day as well.”

Playing their part, as ever, were the fans.

“They came in their numbers and they’ll talk about this game for a long time, probably like the fans who came many moons ago when it was 11-10 on penalties,” he said. “In truth I really wanted to come here and win.

“These have a good home record but we kept going and let’s hope this proves to be a really important point.

“What a feeling again at the end. It’s incredible. The other thing, the bench were all over wanting to celebrate as well, I know that probably incited the crowd a bit more.

“If you can’t get excited about scoring a last minute equaliser against a top team in the league in front of your own fans, you shouldn’t really be in football.

“Those scenes were brilliant and they’ve been brilliant again. I just hope we can get them back in again next weekend at home, let’s get a good crowd.

“Let’s create a real desire from the fans to get in. Let’s get big numbers again, make it an atmosphere, the players will respond to that and who knows what could happen.”