Oldham and United went toe-to-toe in what was a fantastic advert for youth football on Tuesday night, and it was the Latics who eventually won through as they came from behind three times to take the tie to penalties, and the lottery of the 12-yard kicks. 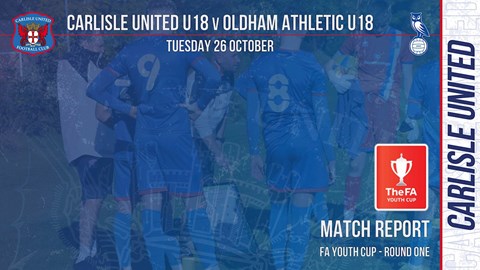 Speaking after the game, under-18s boss Mark Birch said: “I don’t really know what to say about losing this one when you think we were in the lead three times in the game.

“We didn’t defend set pieces properly and that’s a disappointing side of it, because we work so hard on that. To be honest I never felt we had control of the game at any time.

“It could have gone either way but unfortunately it didn’t go for us tonight. We can’t argue with it because we didn’t play well enough. We didn’t show what we’re all about from what we saw from the 90 minutes.”

“We had a lot of opportunities to kill the game off,” he added. “The penalty miss in the first half could have put us two up, and the game changes from incidents like that.

“Penalties are penalties, you can’t blame Sam [Fishburn] for that, but we had other chances, as did they. For us it’s really disappointing because one of our strengths is controlling games and we never felt as if we were anywhere near doing that at all.

“When we look back we’ll think about the positives, because there was some good football and some great goals, but we also have to turn the negatives into positives as we go on from here. Part of that will be educating the lads about what went wrong and why they lost.” 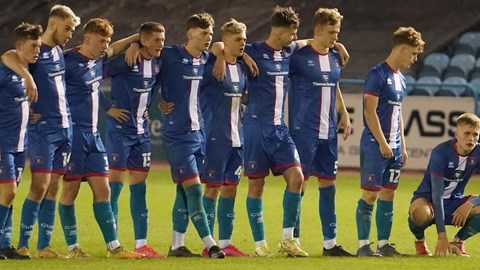 With the players visibly down at the final whistle, having given it so much, he confirmed that it was a dressing room that was going to need a quick and positive reaction.

“They need to pick themselves up, it’s as simple as that,” he told us. “I’ve just told them in the changing room that if they go on to have a football career it’s full of highs and lows, and they have to understand how to overcome the lows.

“Good players will use it as some kind of tool to push them on to the next game, and to be better. Everyone feels deflated because this is an important competition. This is a competition the boys want to do well in and, as we’ve said, one of our targets is to get through, and we’ve fallen short in that.

“The really disappointing factor is that the way we went about the game is nothing like what we expect to see. We normally pass the ball better, we defend better and we have more balance when we attack.

“Every time we attacked in this game we felt vulnerable and that’s something we’ll need to remind them of. It’s not the result we wanted, but we now have to use it as a learning curve for the rest of the season.”

A standing ovation form the 327-strong crowd at the final whistle suggests that they were happy with what they’d seen as the action flowed from end-to-end.

“If you’re a neutral you probably go away thinking that’s what the FA Youth Cup is all about,” he agreed. “You do want to see two teams slogging it out, and I can’t complain about the effort from the lads.

“The players on both teams have been a credit to the club they play for. Unfortunately we’ve come out on the wrong side of the result. 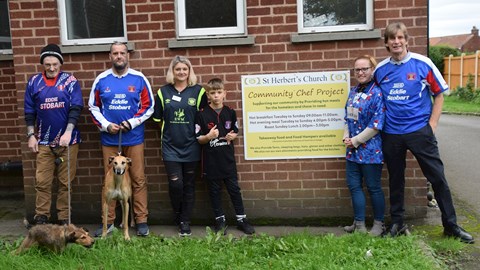 “We ask them to give everything but what they have to do is get the balance of that alongside producing a little bit of quality. We didn’t quite get there so the overall performance drops below the level we expect.

“We don’t feel as if we did ourselves full credit with the way we went about the game. It’s probably the first time this season where we haven’t had control and it probably shocked the lads a little bit. The positive that’ll come out of it is if we learn from these mistakes and move on quickly.”

And with forward Sam Fishburn having scored twice, and also missed twice from the spot, there’s no doubt he’ll have taken a lot from the outing.

“He’s had the best chances, scored from two of them, and his emotions will be up and down,” he told us. “All he can do is roll up his sleeves and move on quickly.

“You can’t dwell on these games, but there has to be an element of understanding the defeat and why it happened.

“Sam was through one-on-one with the keeper at one point but he just didn’t have his legs to take it all the way. The game had everything, it was a rollercoaster of emotions for everybody, him included.”

And what an introduction to the club for new manager Keith Millen.

“It was a chance for the lads to play in front of the new manager and, come the end of the game, ask whose name is he going to be talking about?” he said. “For a neutral it was probably a good game of football but it’s not what we want to see.

“We met him today, only briefly, because we’ve been preparing for the game. He’s had a good chance to see what we’re all about and I think from my point of view it’s disappointing that we didn’t show the kind of quality that we’ve shown so far this season.”