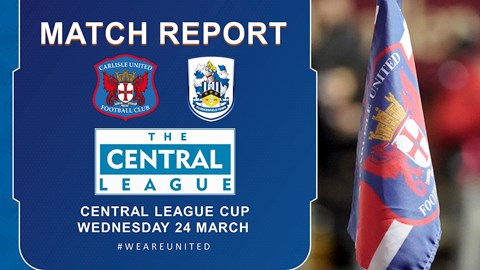 Speaking after the game, assistant head coach Gav Skelton said: “Importantly we won, that always feels nice, because in any game of football you want to win.

“It was windy, the pitch was bobbly, but it was an entertaining game with a lot of chances. I felt we were always in control, organised and disciplined, and we had plenty of opportunities to put the game to bed.

“Huddersfield have good players, they play together regularly, so they can always cause you problems. We’re pleased we got the win, there were some good individual performances and we take a lot from it, as we always do with these games.”

On that feeling of always having the upper hand in the game, he told us: “We created more than they did but they did have chances.

“When you don’t do your basics or defend properly you can put yourselves under pressure by not clearing your lines. That was the case for their second goal.

“It was good to see that we created really good chances, our forward players looked lively, but being greedy we should have won by more. After the first 20 minutes they rotated and moved the ball well, we were conscious of trying to get on top of them through that, and we know the conditions and the pitch, and we maximised both to our advantage.”

Striker Cedwyn Scott scored from the spot, and added another to his personal tally when he slotted home from close range with both goals coming in the first half.

“I was surprised Taylor [Charters] allowed Cedwyn to take the penalty, to be honest,” he said. “He’d taken one in an earlier game, but he was already in the scoresheet.

“That’s why he let Cedwyn do it, and that gave him the confidence to then go on and score his second. Being critical he should have scored his third, but I thought he put in a good performance.

“If you’re a striker and scoring goals you’re obviously getting noticed. We’ll assess the game, as we always do, but overall his performance was good. He’ll be better for the game, he’s not had much game time with our bounce games having to be cancelled with the weather and Covid.

“He’ll definitely be better for it. He came off through lack of games, he was starting to tighten up just that little bit, but he’ll be fine.”

“Danny Devine is another who need the minutes,” he continued. “He’s been injured and he hasn’t trained much. He only got the go ahead from the specialist last week, so he’s only been with us three or four times.

“To play 90 minutes in the centre of midfield like that will do him the world of good and give him confidence not just in his performance, but confidence that he’s ready to really push on again and try and get back in the team.

“Just before he got injured it was his best spell of the season and he was unlucky with what happened, so he’ll be keen to get back in the team and take up where he left off. It’s early, he’s played one reserve game and had four training days.

“Sometimes the adrenaline gets you through the first game and tomorrow he might feel it, but it definitely pushes him further on and gets him closer to his next start.”

On the team performance, he commented: “We always say we get a lot from these games. You could see the young lads cramping up at times, but that’s because they haven’t had a lot of games for all those reasons we keep talking about.

“The youth players enjoy playing with the professionals, and the older lads are out there to stake a claim for the first team. It’s important that they keep showing us they’re ready, and for Danny, Cedwyn and Josh Dixon, and people like that, they got really important minutes and I thought they performed really well.

“They’ll take a lot from it because it’s always nice to play when you haven’t had the chance. Obviously it feels even better if you’re winning.”

The Central League Cup national final pits the Blues against Bournemouth, with the fixture date and venue yet to be decided.

“It’s a local derby isn’t it!” he joked. “But why not win it. Huddersfield are a Championship side and we showed up very well against them.

“We looked the better side so let’s go into the final looking to repeat it, and let’s see if we can finish the good run we’ve had in this competition off.”