With the departure of last season’s captain Nick Anderton during the summer the squad currently finds itself without a nominated skipper, and with the armband yet to be allocated to a dressing room peg.

But boss Chris Beech insisted this week that it’s a responsibility he wants to see shared, whoever ends up pulling it up his sleeve.

“Obviously Nick has gone, he’s bettered himself considerably financially, so he’s protecting his family that way, if you can look at it like that,” he said. “In terms of captains, I want 11 captains on that pitch. I want them all to want it. 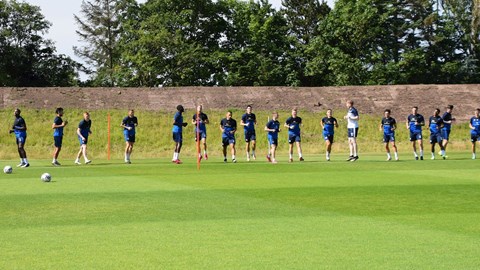 “I’m quite comfortable making that decision at the appropriate time. Currently we have 19 outfield lads training and I want 19 captains out there every day who want to win everything.

“I want everybody to be giving their all. People talk about the importance of a captain, and that’s right, but it’s even more important that each player is talking, advising, encouraging and driving each other on.

“We want to win, and we achieve that by every player, member of staff and everybody connected to the club playing their part.

“Like I say, I’m happy to make those choices when it’s the right time to do it. At the moment I want everybody focused on the work they’re doing.”