United's first step into 2021 is the trip down the M6 to face Walsall - with the country recently placed under tighter restrictions as the coronavirus flared up once again.

United took the bragging rights from both games last season with the same final score - 2-1 - but both were encounters that could have gone either way.

Into the summer and the Saddlers completed their transfer window activity with the captures of Birmingham striker Adan George and Bournemouth forward Jake Scrimshaw as they looked to bolster their attacking options.

Their recent run of good form brought an air of caution from boss Darrell Clarke who warned against complacency - a warning which proved to be correct come Boxing Day.

Defeat at Salford last Saturday brought an end to a run of four consecutive victories with the free-scoring Saddlers having bagged 12 goals during that winning run.

Walsall were six games unbetaten at that point, and had made big strides up the division as they came within touching distance of the top seven places.

Their final fixture of 2020 was Tuesday's home game against Scunthorpe, and they were undone by a second half strike from former United forward Alex Gilliead to make it back-to-back defeats, with Josh Gordon having just missed a penalty.

Rory Holden is still a doubt, having picked up a knee injury ahead of the festive period, but he'll provide a welcome lift if he is he available and involved.

Elijah Adebayo enjoyed a rich run of December form, and bagging in three games on the bounce helped him to take his personal tally to eight for the campaign.

He was quick to praise his team mates for their assists and exciting forward play, but there's no doubt he's a handful for anybody in the final third.

Former Blues loanee Hayden White always seems to enjoy playing against us, and he's been a regular in the starting line up since his arrival in September.

But Adebayo, with his goals, is our one to watch this weekend.

Over 1,000 fans subscribe to this service for our away games - don't miss out ... sign up now to back the Blues!

Our referee for this fixture is Mr James Oldham. He has taken charge of 17 games so far this season showing 42 yellow cards and two reds.

Mr Oldham was in charge of our home game against Walsall in January 2020 (match highlights above). Byron Webster, Stefan Scougall and Mike Jones had their names taken.

He was at Brunton Park for his first ever Football League game as the man in the middle for our 2019/20 season opener against Crawley Town. Harry McKirdy and Stefan Scougall scored in the first half, either side of a net bulger from Beryly Lubula, and that was it for the goals as United claimed a 2-1 win. Byron Wesbter went in the book for the home side and Lewis Young was sent off late in the day for the Red Devils.

We saw Mr Oldham again for our first-round Emirates FA Cup meeting with Dulwich Hamlet in November 2019. Olufela Olomola, Harry McKirdy (2) and Mike Jones bagged for the Blues, and Byron Webster and Ryan Loft had their names taken as Carlisle recorded a 4-1 victory.

Mr Oldham ended his time as an official with the National League at Wembley with the play-off final between Salford City and AFC Fylde in May 2019.

Away tickets are not available for this fixture. See above for full details on how to watch via our iFollow service above. 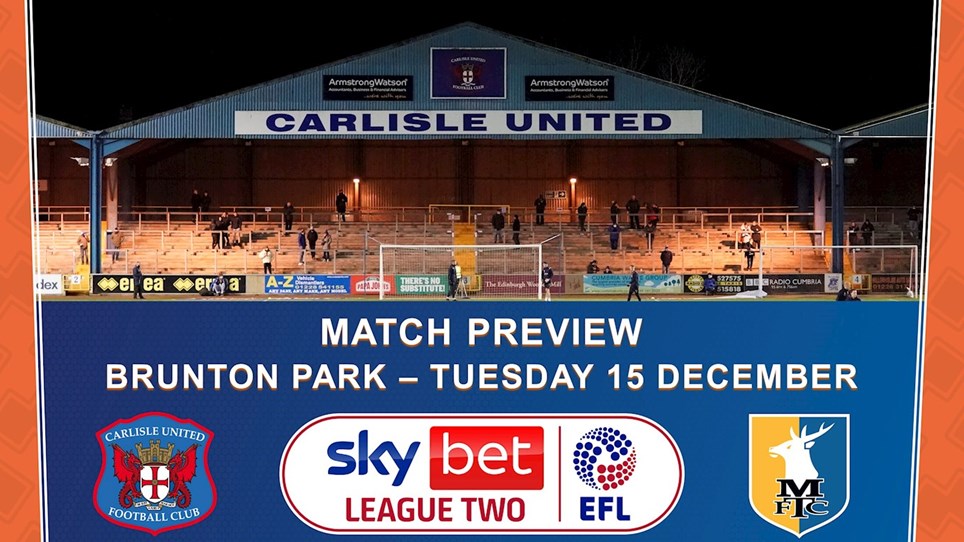 
A blistering Saturday performance takes the Blues into their Tuesday night fixture against Mansfield Town on the crest of a wave.


A blistering Saturday performance takes the Blues into their Tuesday night fixture against Mansfield Town on the crest of a wave.