Yesterday’s big news, of course, was the confirmation that striker Offrande Zanzala had joined the club on a half-season deal, making him the first new arrival of the January window. 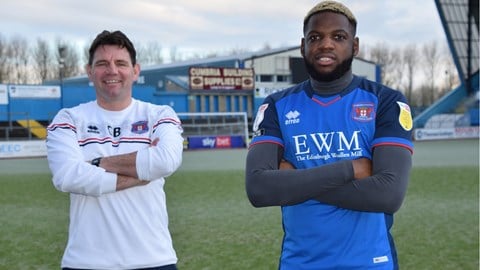 Speaking about the announcement at his weekly press conference, manager Chris Beech said: “Looking at the internet, everybody already knew he was here, I think!

“He’s a player with an eye for goal, he’s physical, quick, he’s edging towards his mid-20s now, he wants to make a mark. He already has done but wants a bit more regular game time.

“He signed for Crewe on the promise of being the number nine, but I think Chris Porter signed and Mikael Mandron signed for them, so he didn’t get as much game time as he’d like.

“For me it was keeping an ear to the ground, looking at the market. I think he’ll support the players we’ve got and add more goal threat, especially with Gavin Reilly leaving.”

“He’s been coming on for Crewe in wide areas but ultimately he sees himself as a centre-forward,” he continued. “If you look at his clips you’d probably agree with that, with his movements.

"The lads just want to play, and do what they enjoy to their levels, it takes you to a different level. Ozzy’s one of those chaps who just wants to be on that pitch and will want to score goals for sure.

“I always do this with every player we try and sign, I always do background checks. I know a lot of people around in our sport, having worked in it for so long, I rang a few lads who know him personally and they couldn’t say enough about him.

“He’s a great character, great lad, good energy and wants to do well. People like that, I’m very interested in. I think Ozzy’s the type who will want to impress anyway. He’s been a little bit frustrated with the lack of game time at Crewe, but we can’t thank Crewe enough for how they’ve enabled this deal to take place.

“It fits us and it fits his opportunity. He wants and has been promoted before with Accrington and he wants to try his best to be involved in a squad that has good things said about it. As a group we currently have an opportunity to make sure we continue on the journey we’re on. 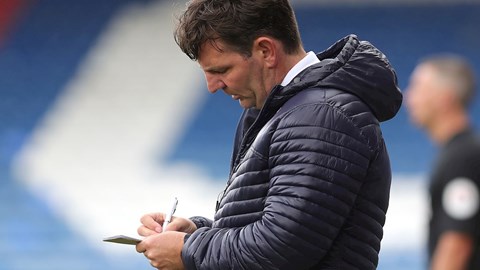 MANAGER: We may have difficult choices to make

“We’ve got to make sure we adhere to the traits we’ve shown so far and keep working very hard. We’ll look to continue enjoying the journey we’re on because a lot of these players haven’t done this before. Ozzy has been promoted before with Accrington, and I’m really looking forward to the next 25 games in this short period of time.”

As with all signings he has to hit the ground running, with his first opportunity to play the Tuesday night rearranged game at Harrogate.

“He’ll be considered,” the gaffer told us. “Our squad gets stronger, we have players returning, Nick Anderton and Gime Toure are available.

“We’ve got our long-standing injuries in Danny Devine and George Tanner - who’s doing great with his recovery - but the squad coming into next week, it’s probably a good half a dozen stronger than it was a week ago.

“Ozzy is part of that. He looks sharp, hungry, he had a few suitors as well, so I’m really pleased he chose us. He and his representative enjoyed the conversations he had with me and David, met him a couple of times, I’m really thankful Crewe have worked hand-in-hand with Carlisle to get to this position of him being available for our 25-game season.

“He’s just a player who fits what I like. He’s an attacking player with an eye for goal, he puts his head and foot in where it hurts, he’s potent in front of goal, he’s quick, works very hard, has some physical attributes, he’s scored goals in League One.

“I think with the quality and intent of our team, we’ve got players who it wouldn’t be mis-fitting if they played in League One. That’s all down to the type of recruitment we’ve done.

“What we’ve got to make sure is we represent everything we are at the moment which is hard work, honest, intelligent at times with our decisions on the pitch with great individual things that come out of the lads, because they’re enjoying what they’re doing.”