Yesterday’s match call-off left the Blues with another frustrating journey home as they hit the nearest M5 exit to start the trek back up north as soon as confirmation came that the Newport away game had been shifted to the ‘still to do’ pile. 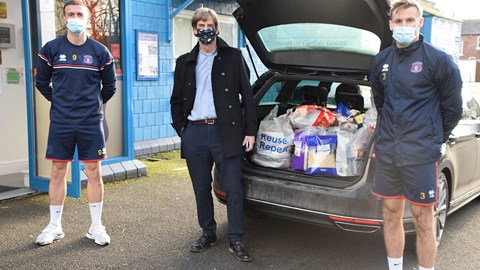 And as soon as that call was received it became a case of switching focus to the next task – what to do with a group that has now been without a fixture for the best part of a month.

Having pulled his weekly virtual press conference forward by 24 hours, as part of his now restructured week, manager Chris Beech spoke about the need to be able to adapt to the ever-changing circumstances the club currently faces.

“Adaptability is what football is about,” he said. “I remember starting out at Bury and having no money to buy footballs, and that was 17 years ago. I had to speak to the Mitre rep and get some old SPL balls because he was selling them off cheap.

“We can get frustrated, we can use it as an excuse, but what’s the point in that, if we’re being honest. The way I see it is that w’ve played 21 games and won more than anyone else in the league to that point, and I think even now we’re joint with a few teams on 12 with them having played more.

“If the players are anything like me, they’ll be highly motivated to get going again. I’m excited to talk about something else other than games that aren’t being played. I want to talk about great goals Omari scores or great passes Callum makes.

“I want Ethan Walker to get his first goal and us to get another clean sheet, because that’s what we’re here to do. Hopefully, come Saturday, we’ll be in a position to do that.”

And he confirmed that one thing that hasn’t been dampened is the competitive edge that has been fostered within a tight-knit dressing room.

“There is a real competitive edge which has boiled over in training this week, but I won’t share that before the game on Saturday,” he commented. “There is a couple of injures but I’m not willing to say who at this point.

“We’re very open and honest with most of the interviews, but I feel unless we’ve got a little bit of our own Carlisle code then the more I tell you the more they know, so I’d rather not do that.

“Imagine being a boxer and every time you’re ready to walk into the ring it’s taken away from you. All it does for me is motivate me even more when I didn’t think it was possible to be more motivated than I was to start with, and I think that’s what it will do to the players.”

One of the players adding to that competitive spirit is striker Josh Kayode who, it was revealed, had the option to discuss a loan deal with a League One club prior to the option for his recall to be triggered by parent club Rotherham coming to a close.

“He’s a very good player and he’s grown so much on and off the pitch, as well as actually physically growing,” the gaffer told us. “I took him out onto the pitch on the first day I brought him here last season and we talked about how he could make his mark on the football league.

“I gave him his debut, and obviously I want him to go on and have a great career, but I told him while he was here I wanted him to grow and respect the opportunity we were giving him.

“Maybe that helped him make his decision when we got to the last day of him being able to go somewhere else. He decided to stay to see this through, and a big part of that will be the nice messages he gets on social media.

“It’s hard for him, he’s living away from home and he’s having to make sacrifices, but we all are in different ways. He doesn’t have to do it, but if we’re all doing it then let’s try and make it worth something.

“JJ has looked at that and wanted to stay, and he’s turned down the opportunity to go into League One for that.”

And returning to the subject of adaptability, he said: “If you can’t play, you want to train, and if you can’t train you’re pretty scuppered then. It’s your job.

“We’ve had to adapt and train in smaller groups in the Neil Centre and the gym. George Tanner is doing his rehab on the bench press with his mask and gloves on then he’s spraying down the equipment after he’s used it.

“We’re only allowed five players in the gym at a time, so there’s all sorts going on that people won’t see. It just shows the commitment the lads have to try and represent this club and try and gain three points at the next opportunity.

“You can plan a week and nothing in the plan actually happens at the moment, but it’s about adapting that plan. Unless you work at a football club where you’ve got eight grass pitches to train on with undersoil heating and a swimming pool to warm down in, and somewhere we can all come in on a Sunday for breakfast with our families, we’ve got to make sure we utilise everything we can.

“We’ve done that very well up to now and we’ve got to try and continue that.”