It’s been a tough week for United’s stadium manager Dave Mitchell as he’s led the battle against the cold snap in a bid to beat the temperatures and get back-to-back home games on, always mindful of the fact that the fixture list is becoming ever more congested for the Blues. 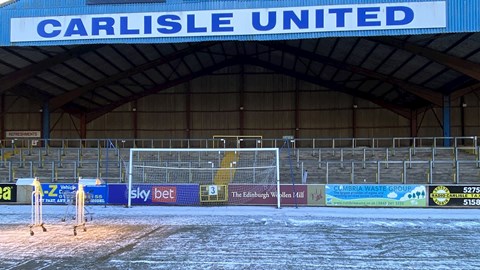 MATCH OFF: Crawley game lost to the freeze

We caught up with him this afternoon, shortly after Saturday’s visit of Crawley Town had been postponed.

“It’s been a really frustrating week,” he said. “It’s one of those periods of weather we all thought we wouldn’t see again for a while, particularly with the warmer winters and what have you, but it’s come back with a bit of a bang.

“In these circumstances there wasn’t anything else we could have done. We’re using the same sheets we’ve used in the past. We lost the GeoFleece to the floods in 2015, and the fleece is useful but the practicality of it is enormous in terms of storage and keeping it dry.

“I think I’ve said before that the fleece’s insulation properties are so good that when you roll it up when it’s had frost on it, you just can’t get it apart again. We looked at the technical side of that, to see if we could get improvements, but nothing really came of it.

“We are where we are with that, and I know we’ve seen the fleece keep games on, but another factor of that is the fleece was sitting on a surface that had a nice inch of grass on it. Unfortunately this season we don’t have much grass left. 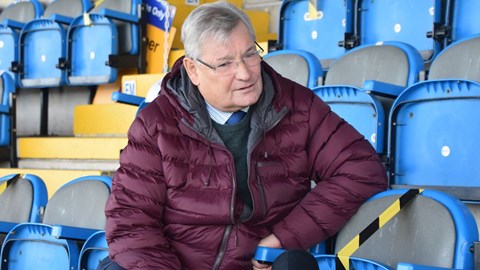 INTERVIEW: We all agree that sustainability is the way forward

“There was always the likelihood of a Covid break somewhere down the line, and it’s just really bad luck that this kind of inclement weather has come at the same time as the virus hit us.

“So, we’ve done what we can, and with the fleece, it might be something we revisit, I don’t know. That’s for the powers that be to look at, but even with these temperatures, anything would be a struggle.

“The fleece has done well for -4 or -5, but we’ve had regular nights of -6 and -7 this week, so even the fleece would taken to the cleaners by a frost like this. As we said earlier, you can only do what you can do.”

Another factor to be considered in this week’s tussle with the elements that ‘feels like’ temperature has often been another four or five degrees lower than an already low forecast figure.

“Today is a good example of that because the sun is out but we’re all pretty cold,” he told us. “I’ve noticed as the week has gone on that even with the sun up, and on those bits where the wind has moved the covers and we’ve come to sort that out around team time, the pegs have been harder to get into the ground.

“It’s been getting colder and colder as the days have gone on. Like I say, because of the sparseness of the grass it’s just so much easier for the frost to get in when it’s bare ground. I think we’re on a -10 windchill factor on Saturday so if there had been a game, I think it would have struggled.

“On Tuesday, if we had played at 2.30pm, the pitch was starting to get crusty at 6pm. So if we’d kicked off at 6.30pm, as originally scheduled, we would have seen the game abandoned, absolutely no question.

“The earlier kick off was a good idea, it made sense in the world of football flexibility that we have this season where we can sort of almost go at any time on any day.” 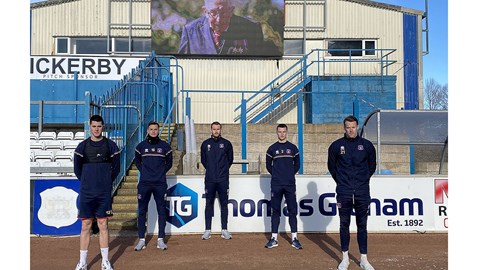 “With the Orient game it was even more frustrating because we had a pitch inspection by a referee from Blackpool on Monday and the pitch was playable,” he explained. “You kind of understand the procedure because we don’t want to end up with a Newport phone call at midday to say a game is off when we could have had the call at 9am.

“Trying to be professional and proper, and go by the regulation, a pitch inspection was the sensible thing to do rather than have the game called off on Tuesday and have everybody question whether we could have done that the day before.

“Being able to call it off on Monday wasn’t the case, we could have played it that day, particularly when the referee comes in and confirms that it’s ok. We covered the pitch, which was great, then hey presto you get up and start the car on Tuesday morning and it’s showing you that it’s -7.

“Sometimes I’m looking out of the window at four in the morning or popping out on the grass in my back garden, just so I can see what’s going on. When you’re talking about playing on turf when it’s been -7, it’s just a bit too extreme.”

As for the procedures adopted through the week, he told us: “Throughout the week we’ve peeled the covers back to let the sun in during the day.

“When you do that and have easterly winds, as we have this week, they come through the open end of the stadium and the sheets end up all over the place. After that you’ve got a bit of a task to try and straighten them all up again, so you’ve just got to weigh that up to decide whether it’s worth it.

“When you’ve got the Warwick Road End that we know won’t thaw, the rest of the pitch almost becomes irrelevant. We always do everything we can to try and get games on, but sometimes the weather beats you.

“There are things we can look at to try and improve the situation so we’ll continue to look at those and try to move forward with it.

“Like I said, with the number of games in the period of time we’ve got, but sometimes it becomes inevitable that somewhere down the line you’re going to lose one or two. We’ll just keep battling away.”

Just under 15 years ago now part of the pitch reconstruction process included the laying of undersoil heating pipes, a system which remains in place to this day.

“The undersoil heating pipework was installed when the pitch was constructed back in May 2006,” he confirmed. “It’s nothing more than 26k worth of pipe which is ready to be plumbed up.

“At the time, when we got some costs, it was around £250,000 to take it from there. It was the right thing to do at the time and it was a sensible decision. It was put in there so if we needed to do it, we had the option.

“You get to a certain level in the pyramid and you have to have it, and then you would be in a position where you would have to dig the pitch up and start again. It’s ready to be plumbed up at any stage, but obviously the cost is a big factor.” 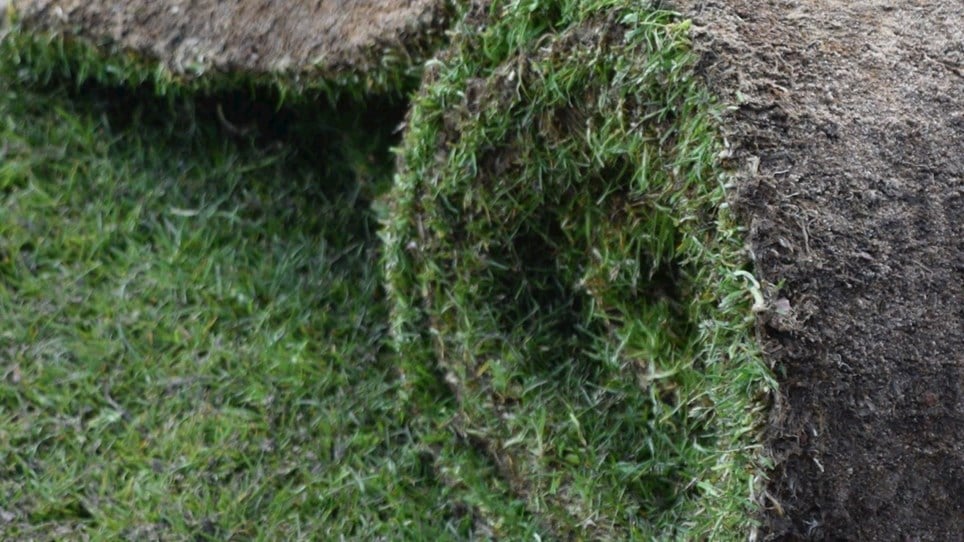 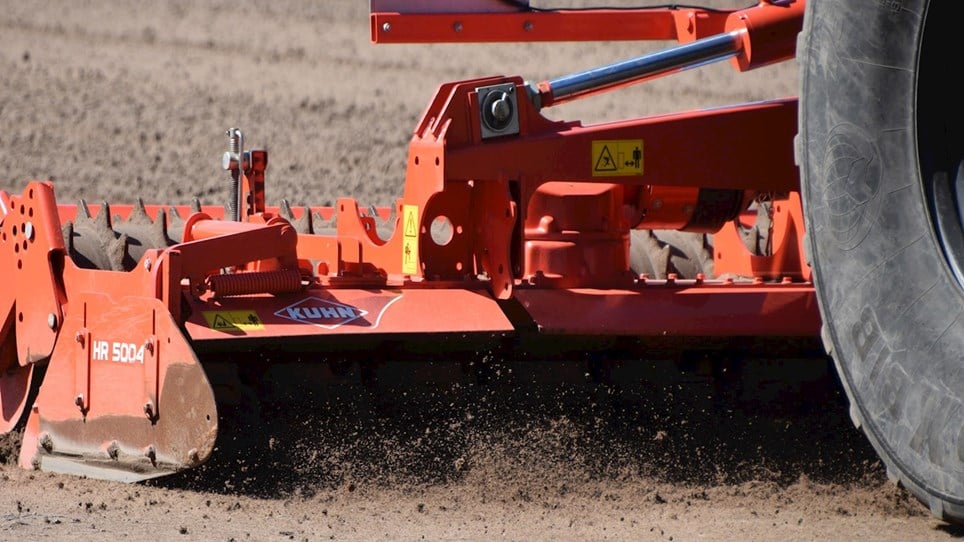 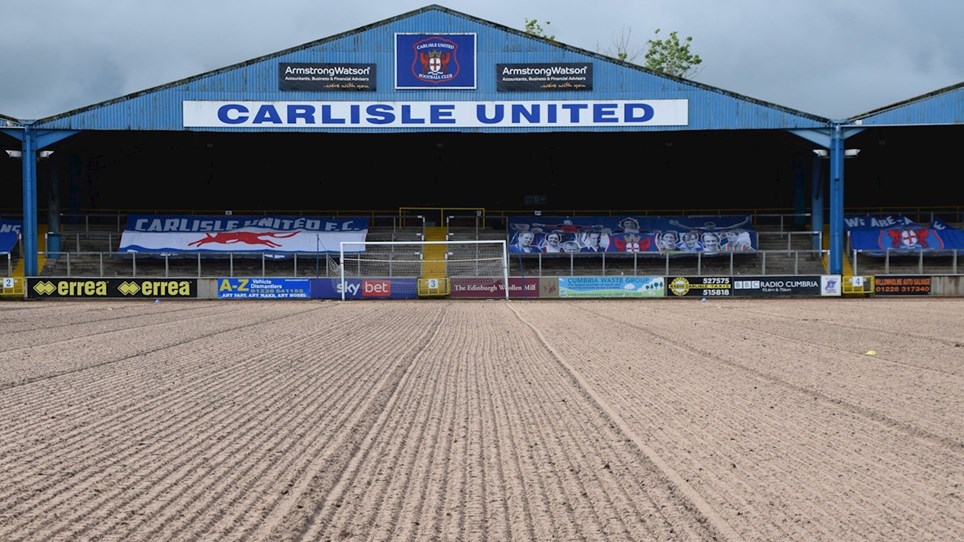