The recent bad weather has made the organising of training sessions a particular challenge for manager Chris Beech and his staff but, with this weekend’s Cheltenham game postponed, he admitted to looking forward to two good days with the group as preparation for the visit of Leyton Orient. 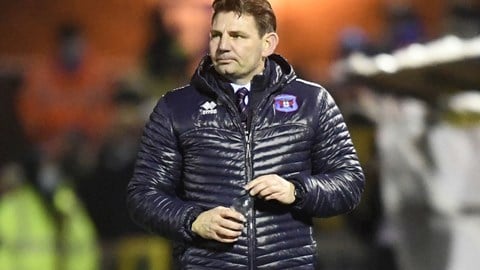 “It is difficult, but it is what it is,” he confirmed. “The biggest factor for me has been that we haven’t been able to train outside. Today [Friday] we can, the weather’s good.

“Hopefully we can get some dry weather, but we have the capability of training on our pitch on Saturday. It’s a great way of resetting and creating good quality training sessions and getting the boys doing what we do best.

“I’m really looking forward to the next two days, get the tracksuit on, the whistle out, getting everybody at it, it’s a part of the job you really enjoy.”

Speaking more about the importance of the training sessions planned for this weekend, he added: “I think it’s pretty vital, but it’s vital anyway, responding to a setback, getting ready to play a massive game.

“They’re all vital in my opinion because every day’s a day to get better. You are where you are at that point, you’re utilising everything you can to get better for tomorrow.

And, as previously reported, part of that preparation includes regular Covid testing for the players and staff involved with getting games on.

“That’s easier now, the tests are a lot quicker,” he explained. “I’ve just had mine now, the players are coming in slightly earlier to get tested.

“On these testing days, which are twice a week, I wait patiently for an hour, and touch wood everybody comes through it.

“At that point you can step forwards into doing your training, getting ready to play your opponent – this weekend we can’t do that, but it’s just an extra thing. I’m just really looking forward to getting back to some sort of normality and rhythm because it has been a difficult month.

“I’m so pleased for the players getting a victory over the Saturday-Tuesday because of the period we’ve had. But nobody’s too interested in ifs, buts and maybes, everybody looks at facts of games.

“There’s not too much compassion in our great sport if you don’t win a game, or win well. We’ve got to understand that. Stocks and shares of football is the value of three points and I’m pleased we managed to get a victory.

“It’s really good we’ll get outside today, and we will tomorrow, and that time on the pitch will be used to try and get the lads in that rhythm of being used to Saturday-Tuesday fixtures.

“We’re going to have a game amongst ourselves on Saturday, but today we’re outside, working in a bigger group and doing what we’re meant to do, which is getting ready to play our opponents.”

And on whether or not the season should extend, with United again having to squeeze another cancelled fixture into the mix, he said: “I’m not the EFL, it is what it is currently. Because of that, and Covid, we recruited maybe two or three more players than you’d probably think you’d need.

“That’s because of the difference it may cause, and the fact you’ve got all these fixtures coming up. As a manager you have to try and get in front of the fact that when you have that slightly down performance in energy, and ours was in the first half against Forest Green, and make changes before it happens, which is very difficult.

“But the beauty of the rules currently is you can make five substitutions. I think we’ve got to look at utilising that from now until the end of the season.”

“In terms of extending the season, nothing to do with me.,” he concluded. “We have to keep replanning all these fixtures to get them in the fixture list, and look forward to playing them when we can. We don’t have any games in hand, we have 23 games left to play, and that’s how we’ll look at it.”