Defender George Tanner was quickly becoming a favourite with the fans ahead of Christmas but his blossoming Carlisle career was cut short when he tumbled to the floor with just seconds left to play in the home win over Stevenage. 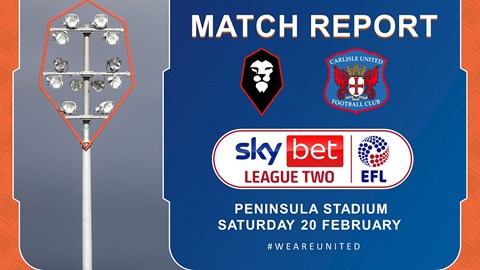 MATCH REPORT: From the Salford away game

An x-ray confirmed a nasty break in the collar bone, and an operation to shore up the injury was quickly scheduled.

Fast forward two months and it’s all smiles again, with the former Manchester United graduate bagging the opening goal against a club where he’d spent a short spell on-loan, and in front of two if its well known co-owners Ryan Giggs and Paul Scholes.

We spoke to him shortly after full time to get his thoughts on what had been a game full of energy and incident.

“To be honest, I think we’re quite happy with the point at the end of the day,” he said. “We know we could have won the game but we dug deep against a good team. They’ve got a good home record so a point is ok when you think about that. 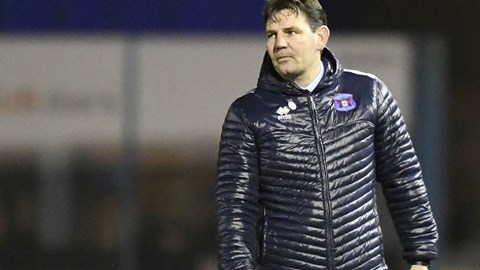 “We’re a bit disappointed, but happy with the fact we worked hard and that the performance was better than Tuesday night’s.”

“We went into it knowing they hadn't been beaten here but we didn’t think about it too much,” he continued. “We always just try to play the way we play and do our thing. If we do that we know we can beat anyone.

“The way we started, I think that’s what hurts teams. We’re hard to deal with when we get on the front foot and press. It catches teams off guard so it’s good when it comes together for us that way.

“Our disappointment comes from the fact we worked so hard. It was gutting when they scored because of the shift we’d put in. They did have a fair few chances so we know it’s a game that could have gone either way.

“The good thing is that we made ourselves harder to beat and we looked a bit more like ourselves. One of our strengths is making ourselves hard to cope with because we’re a very solid and physical team. We did well and it’s something to build on.”

So, what about the goal – what a strike and what a great way to add a second to your tally!

The cross from captain Nick Anderton caused all kinds of problems and it then had to be one of those ‘eyes lit up’ moments as it angled his way.

“It did drop to me nicely and you can definitely say I was buzzing with that goal,” he admitted. “Of course it’s good to score against one of my old clubs.

“As people know I had a bit of a tough time here so it was nice to score. It’s just a shame we didn’t win the game. I only score against my old clubs - two a season, that’s it for me!”

And if you watch the highlights you’ll hear a shout from the manager as he sees Tanner winding up his boot which says ‘target’ – a direction to make sure he gave the keeper something to do.

“Did he, yeah?” he asked. And, when confirmation came that the shout had indeed been given, he said: “He’s always saying that – keep it low, keep it low! Yeah, I’m just buzzing it went in the corner.” 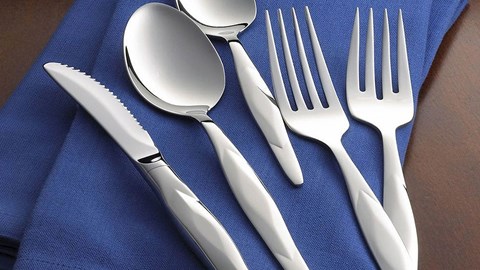 A pat on the back for the 20-year-old right back was an immediate return to the team once he’d been given the all-clear by the specialists on his shoulder.

“The manager obviously trusts me and believes in me,” he commented. “I’m happy to be straight back in the side and hopefully I’ll keep building on this.

“I think it’s all about building fitness and match fitness back up, that’s what you miss. Being out for two months does affect that, so I’ve just got to build on the performances and keep improving.

“It’s been a really tough period, not just for me but for the other lads with the postponements and things like that. It has been hard for us to get going and that’s why we’re looking forward to this run of games.

“Personally being out for two months has been really hard, but I worked every day with the aim of getting back as quickly as possible.

“I had to wait for the collarbone to heal and be fully strengthened before I could really push on. I could run a week after the operation, so I wasn’t missing out on any cardio fitness.

“Now it’s fully healed, with a metal plate in there, hopefully it’ll be alright and it won’t be breaking on me again. When you’re injured all you want to be doing is helping the lads and playing football, and there’s no better feeling than winning.

“That’s what we want so we need to focus on climbing back up that table again. I think we will. I think we all believe we can go on and do well. We all want to push for promotion but we know we have to take each game as it comes and keep building on our performances.”

“It is important to get straight back in having been out for so long,” he added. “You need to get a feel for playing again because you do miss that a little bit.

“I’ll keep working on my fitness and strength and I know I’ll be back to what I’m good at. We’re only just over halfway which is amazing really.

“There’s only two and a half months left but still nearly half the games to play. It’s going to be tough but if we keep our fitness levels up and use our squad, I’m sure we’ll do well. If we keep picking points up we know we’ll be there at the end of the season.

“Saturday was an improved performance from the Harrogate game, so we’ve just got to keep that up. Our performance levels before the break were fantastic and if we get back to being a tough team that’s hard to beat, we know it’s there for us.”

Click HERE to watch an interview with George Tanner on iFollow United now.