Carlisle United can confirm that defender Aaron Hayden has today left the club to join National League side Wrexham on a three-year deal for an undisclosed fee. 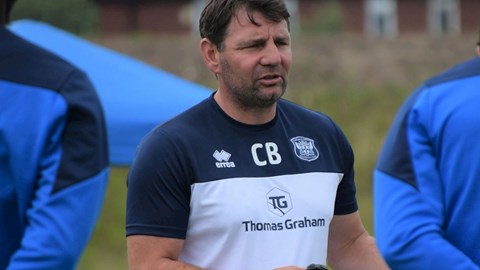 Manager Chris Beech said: “It’s never ideal losing a player so close to the start of a new season, especially one who you would class as being part of your first eleven.

“Since I came into the building Aaron has been a great lad with a great attitude. I spotted that young energy before I came to Carlisle and I felt that he should be given that opportunity to break through when I started, and he’s done just that.

“I’m delighted for what he’s achieved as a player and a young man under our direction in such a short space of time. It’s testament to Aaron that I brought him in as vice-captain last season, given the leadership qualities he’s building into his game.”

“From a personal and footballing perspective I’d have preferred him to stay,” he continued. “But I appreciate it’s an opportunity that Aaron feels he wants to take to look after his family and progress his career in the way he feels is right for him, and I respect that.

“He’s joining a club that has recently acquired new celebrity owners and they’re clearly determined to invest to try and achieve promotion out of the National League.

“They’ve brought an experienced guy in Phil Parkinson in as their manager, and he’d be aware of Aaron from the games we had against them when he was at Sunderland.

“Football finance often dictates these sorts of situations and sometimes offers for players present themselves that the football club would consider naive to turn down, given the circumstances.

“On behalf of myself, the players and everyone associated with the football club we wish him nothing but the best in his new chapter.”

Hayden, 24, signed an initial one-year contract with the Blues at the end of July 2019, following a successful trial period.

This was renewed in January 2020, for a further 18 months, and he secured another 12-month spell at the club when a clause was triggered at the end of the 20/21 season, with him having shown leadership qualities on and off the pitch when he was appointed as vice-captain for that campaign.

Croydon-born Hayden had a period in the youth system at Chelsea before moving north to join the Wolves academy as a 16-year-old in 2015. He enjoyed loan moves with Newport County, Hemel Hempstead Town, Bromley and Telford whilst with the Molineux outfit.

Prior to his arrival in Cumbria he spent almost 18-months on loan from Wolverhampton with Southern League Premier Division Central outfit Stourbridge.

His spell up north became successful on the arrival of Chris Beech in 2019 when he was immediately elevated to the starting eleven, and he went on to make the centre back role his own.