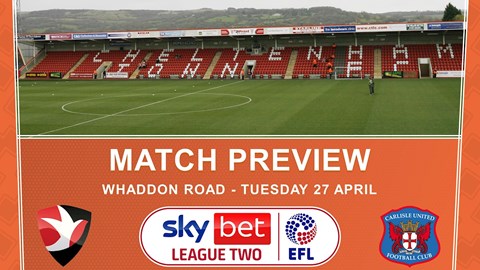 Looking ahead to the game, manager Chris Beech said: “Cheltenham’s league position isn’t something we’ll think about. We’ve got to make sure we represent Carlisle, our fans, and play football on a real tight pitch.

“They’ve got a throw-in, the best in the division, you’re probably better giving away corners than you are throws, but maybe that’s the strategy, who knows. They’re very good at scoring from it.

“I watched the Tranmere game on the coach on the way down to one of our games, and they flatlined Tranmere within 20 or30 minutes of football, but it was constant long throws, and I mean constant.

“They’ve got the players to do that. They’re specialists at seeing out games. That’s why they’ve managed to get to the top of the league.”

“Our focus is totally on the final three games,” he added. “We know we have to get maximum points, and if we drop points depending on other results, we might then change into looking ahead to next season.

“I’ll have a look at Cheltenham and understand the strength and physicality they have to their game. I’ve mentioned the throw, they’re the best at it in the league, I think they’ve scored more goals off the long throw than any other team.

“It’s very difficult to fight what they’ve created at this level on their tight pitch, especially when they’ve got towels and all the little extras to make sure it’s even more of a weapon for them. But it’s what they do, and we have to be ready for it.

“If somebody puts the ball over your back four and you’re under pressure, what are you going to do with the ball, what does a League Two player do, he puts it out for a throw-in. And any throw-in in your own half’s going in your box. Anything in your box is headed out which can soon become another corner or long throw. It’s a cycle which can cause a lot of pressure.”

Heading into the final three games knowing that all nine points are needed, he commented: “You want to win them all but to do that you’ve got to stand up to some force, athleticism, and some good football.

“Cheltenham can get it down and play, they’ve got very good players, good timing to come in on overlaps. They’re a good team, but they’ve been in a situation like ours, and they’ve been able to go around the track two or three times in terms of seasons.

“Because of that they’re in this position now, they’re stronger, they will have been invested in and have upskilled every sort of situation to be in this point. Well done to them, and we’ve got to make sure we go against it. 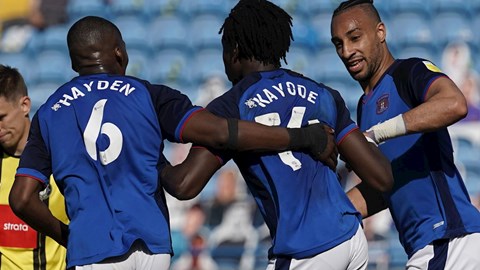 “We know our players have to be right at it from the off, which we weren’t on Saturday. I’ve watched a few of their games and it can become frantic because of the pressure they can put you under.”

“But we don’t want our season to just peter out,” he continued. “It’s optimistic, but it’s attainable. And we are capable. If we weren’t capable, I’d be, nah, no chance.

“We are capable. And I’d like to see a response to what happened on Saturday. We’re playing one of the best teams in the league, it’s going to be a good night.

“A lot of things happen, a lot of top sportsmen will tell you a lot happens in the last 10 metres of a 100-metre race, or the last lap of something. There’s always some drama in the situation. You have to make sure you go all the way, and that’s what we’ll be trying to do.”