Striker Ozzy Zanzala opened United’s Saturday account with a wonderful finish on Saturday afternoon as he took a header from Aaron Hayden on his chest, just inside the Southend half, before spinning to set off on a run which culminated in an unstoppable, accurate finish. 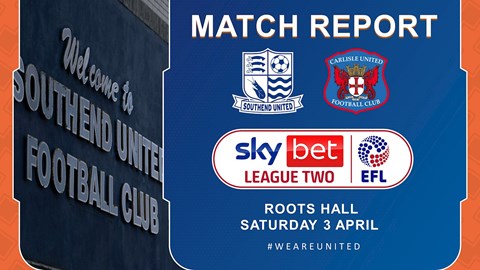 A second goal from Gime Toure sealed the victory, and Carlisle’s number 10 spoke at full time about the importance of back-to-back to victories with nine games of the season left to play.

“It’s crucial,” he agreed. “We wanted to get a second win on the bounce, it was good that we did, and hopefully we can go on a run now.

“There are nine games left and we want to pick up as many points as we can so that we can push on for the play-offs. We want to be winning so it was important that everyone dug in, and everyone supported all the way through, from the bench and the staff, so we’re all really happy.

“We still have loads of games coming up and it’s vital that you recharge so that you’re ready to go again. There’s a little bit of momentum again at this moment in time and we want to keep that going.

“We’ve got every opportunity to get points and we showed again at Southend that we’re going to fight for it. It was another clean sheet and we played some good football as well, so we’re looking to do that again on Tuesday against Scunthorpe.”

On the different types of performances needed to get the victories over Southend and Crawley, he commented: “Saturday was different to Tuesday, I agree, but you get different games along the way.

“It’s important you can play both sides of the game because that’s what this division is like. Speaking to the manager before the weekend he told us that our away record needed to improve, and we’ve done that with a clean sheet and two great goals.

“It’s up to us to build on it now and we’ll focus on each opponent as they come along.” 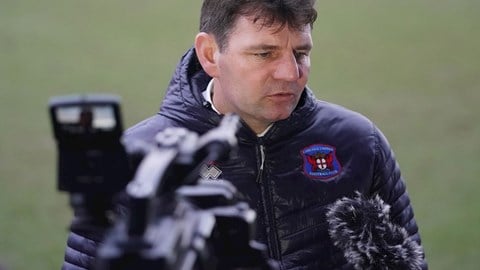 MANAGER: It was a professional display

Focusing on his goal, we suggested that it was possibly his best for the club so far, with the way that he had first controlled the pass before setting off on his run.

“I’ve looked back at it once so far and it felt really good when it went in,” he told us. “It’s always nice to be on the scoresheet. The ball came from the back and I managed to get it down and get going.

“I wanted to get the shot off and fortunately for me it went in. It’s good for me to look back on because it reminds myself that I can score a variety of goals, whether it’s a header, inside the box, outside the box, or if it’s taking someone on and playing others in.

“I’m just happy that I’ve played my part. Sometimes you have to be greedy as a striker. There are players like Lewi and Omari who make great runs, and I was working off Lewi in the first half especially.

“But if the space opens up that much, as it did then, or if the defenders aren’t getting tight, it gives you a decision to make. If you find that pocket you just take it, and I feel like it will help me massively with my confidence with the way I finished that off.

“When you have players in midfield like we have who can create chances it’s just a really good place to be. They’ll have more confidence having seen the goals to give me the ball more, so things like this are good for the whole team.”

Having been through the debate with Rhys Bennett about who got the touch for the close-range tap-in during the Bradford game, he told us: “It was goal number five for me, and I’m really happy to have got it.

“I just need to keep working hard, keep enjoying my football and make sure I’m ready to go again for each game. There are a lot of games coming up and we need to get to the play-offs, so I want to be helping that with more goals.

“It’s what I came to Carlisle to do and it always feels good when you get one. I go into games believing I’m the best player on the pitch, and I think every player needs to have that self-belief. You have to believe that you’ll give the defenders a nightmare and that you’ll get chances.

“I’m very physical in the way I play and I’m just happy that I’ve been given the opportunity to show people what I can do. It didn’t happen for me in the first few weeks I was here, and I wanted to be getting as much game time as possible.

“That’s happening now but there’s still more to come, and I know I’ve got more to do. With nine games to go, who knows, there might even be more surprises to come from me. I’ll happily take the knocks and kicks if it means we’re getting three points. Our aim is to get promoted and we don’t want the hard work we’ve all done to be in vain.” 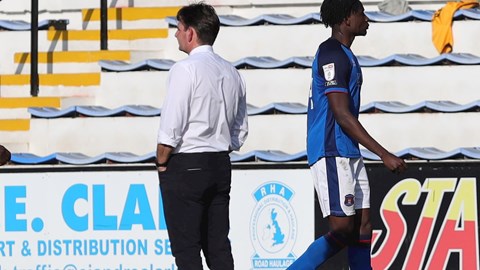 With him having mentioned the physicality of his style, we pushed him more on the way he makes it so hard for the man who is charged with standing at his shoulder.

“That’s my game, I really enjoy doing it,” he admitted. “It’s important to be able to do the dirty side of the game with a smile on your face. People know how I play, but it does take a lot.

“I think I get plenty back off the defenders as well. but I don’t mind that. If it means it helps us to get three points at the end of game, or it helps me or somebody else to get an opportunity, then I’ll keep doing it.

“If I’m working hard then maybe the player beside me can get in on goal, so I feel it’s important that I keep doing my best for the team. If that means assists or goals, then that’s good.

“The thing is, we still think we can do this. We’re at home on Tuesday and we know we have a great record there. We’ll be working hard because we know there are no easy games.

“We’re willing to give it everything, we’re through the rough patch now, and you can feel the spirit is really in there. It’s a dressing room of good players and it’s great to be part of it.”

Speaking more about that frustrating run of results, he said: “It was difficult, everyone knows that, and I don’t think we can hide from that. It is what it is, and it’s in the past now.

“We’re looking forward to what’s in front of us and that’s the only thing that’s important. Every player knows that, and everything we’re doing is with the last nine games in mind. We’ll keep chipping away and going into every game believing that we’ll score goals and win.

“We know we’ll work hard, that’s needed in every game, and we still believe we’re there to get promoted. I know some people might write us off but there’s still an opportunity to get to the play-offs, as we’ve shown with two good wins and two great performances.

“Hopefully we’ll look back at the end of the season and we’ll have been promoted, and that’ll be because we came through the run we had to go onto another one where we did well.”

There was a scare at Roots Hall on Saturday when the popular front-man went to ground midway through the second half.

“It was my ankle, it’s fine,” he insisted. “I rolled it when I went for a header but I should be ok. You don’t really think about these things when you’ve scored and won a game.

“There’s nothing to worry about, there’s no swelling or anything like that. We’d rather be safe than sorry, which is why I came off.

“Getting my goal and the win was all I was thinking about. I obviously want to score as many as possible and I have my own target for that. I won’t tell you what that is just yet, but I know I have more assists and goals in me.

“The more I play the more I enjoy myself and the more confident I feel. With how I am as a person I’m proud of my own performances at the moment and I’m really happy that the team is showing what we can do as well. It’s all there for us to play for.”

Click HERE to watch an interview with Offrande Zanzala on iFollow United now.