The fifth iFollow update, up to and including matches played on 31 March 2021, and covering the home fixture against Crawley (36 games in League Two so far) is now available.

“Since that last update we have had 10 games in just 32 days. That’s £100 in a single month to watch all of our games, which certainly is a major financial commitment for fans at this time.

“With two games every week in the last month, the cost to fans of watching every game soon starts to mount up.

“The high number of games has also coincided with a tough period for results, so it is no surprise to see the number in March reflect that.

“The effects of Covid on everyone gets worse as time goes on, and that means the support we continue to get is superb. We are very grateful.

“A big thank you goes to everyone who is continuing to use iFollow to back the team as the season builds to its conclusion.”

We now have the data from 36 League Two matches for our iFollow UK streams - 19 at home and 17 away. The UK paid subscriptions are as follows:

The number of paid UK domestic streams has a peak of 1,422 (for the Exeter win).

The 19 homes have now seen a total of 17,538 paid streams by United fans (excluding the 300 season ticket holders at each Behind Closed Doors game).

We remain ranked second behind Bolton in League Two for the highest average number of paid home streams per game, at 923 (some clubs have very high numbers of free home passes given to season ticket holders, meaning paid home streams are low).

The iFollow streaming service allows UK based fans to get to see us play away from home, certainly more often than ever before.

In the 17 away games so far, 17,949 (13,400 after 13) fans have streamed away games, earning £76,000.  This compares with a typical expected CUFC attendance at away games of around 6,800. That is nearly three times more fans watching away games on iFollow than would normally attend live.

Our away game streams grew consistently up to the end of February and reached a peak of 1,798 for our away game at Harrogate. Since then they have levelled off and fallen back to around 1,100 per away game in March.

We are now ninth in League Two for the highest average paid away streams per game, at 1,056 (up +2% from February).

Over the whole season, each away game is earning us on average of around £4,500 after our payments to the home teams. 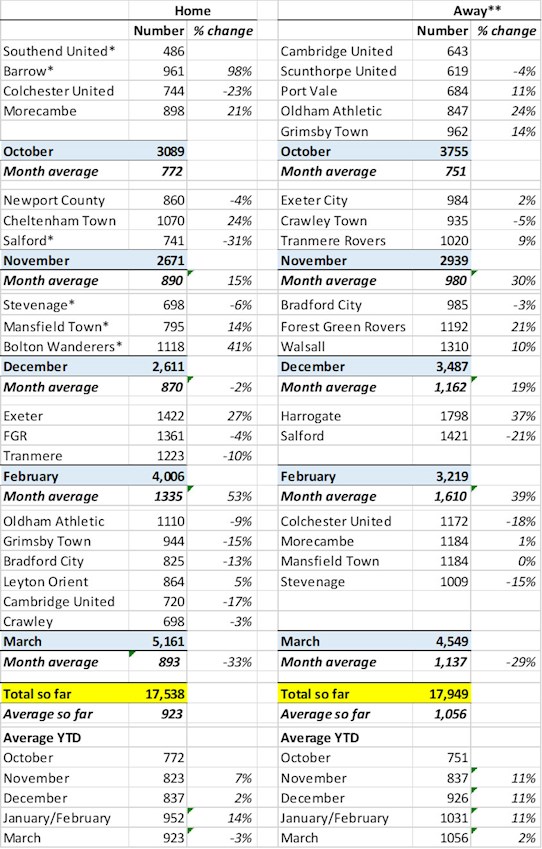 *numbers distorted by individual fixture factors – Southend and Salford very low as we had 1,000 and 2,000 fans in the stadium, and Barrow high due to the special interest in the game.

**The income from the first 500 streams bought by CUFC fans for away games (£8 x 500 = £4,000) is paid to the home club. But by the same mechanism we get the value of the first 500 from every away team coming to Brunton Park. Over the season the net effect of this is neutral, if we sell at least 500 streams per away game.

To read the fourth update from February, click HERE.

We continue to appeal to fans to back the team and use the official iFollow service only.

A reminder of the EFL anti-piracy campaign is HERE.