Our fourth iFollow update covers the period up to and including matches played on 25 February 2021 and covering the last home fixture against Tranmere.

Despite the interrupted schedule the service continues to show growth and record numbers.

As stated in our first review back in October, the lockout restrictions faced by clubs mean that the EFL Digital iFollow streaming service was important.

Once again we find that the return of fans is delayed, and that means that iFollow becomes even more important to the club, both financially and as a way of maintaining support and connection with the players and team.

Chief executive Nigel Clibbens said: “December was a record month, and records were beaten again in January and February despite the interrupted schedule.

“Our fans are showing more and more support for the team through the iFollow service.”

“Although fans couldn’t be with us at games in the period, they were there in spirit in bigger and bigger numbers. It is no substitute for live action in person, but it continues to make a real difference.

“For the Harrogate game we also recorded our highest away streams so far.

“We are pleased there have been no major issues in terms of the service, and that people have stuck with us despite the postponements.”

“This gives income to the club of around £195,000, after adjusting for payments to host clubs when we play away.

“With fans now locked out for the rest of the season we expect the average number of home paid streams continue to grow towards 1,000. It remains a really important factor with our other income revenue streams stopped again.”

“There is finally some light at the end of the tunnel with the roll out of the Coronavirus vaccine and falling infection numbers but, as every week and month passes, the financial cost and club losses get bigger and bigger,” he continued. “The effects of Covid on everyone gets worse as time goes on, so the support is brilliant.

“With two games every week for a long time now, the cost to each fan of watching every game soon starts to mount up. So a big thank you goes to everyone who is backing the team.”

“Pirate streaming continues to be a problem” he concluded. “We therefore continue to appeal to fans to back the team and use the official iFollow service only.”

A reminder of the EFL anti-piracy campaign is HERE.

We now have the data from 26 League Two matches for our iFollow UK streams - 13 at home and 13 away.

The UK paid subscriptions are as follows:

The 13 homes have now seen a total of 12,377 paid streams by United fans (excluding the 300 season ticket holders at Behind Closed Doors games).

We remain ranked second behind Bolton in League Two for the highest average number of paid home streams per game, at 952 (some clubs have very high numbers of free home passes given to season ticket holders, meaning paid home streams are low).

The iFollow streaming service allows UK based fans to get to see us play away from home, certainly more often than ever before.

In the 13 away games so far, 13,400 (10,181 after 11) fans have streamed, and this is compared to a typical expected CUFC attendance at away games of around 5,200. That is more than double, as more fans watching away games on ifollow than would normally attend live.

Our away game streams have grown consistently and reached a peak of 1,798 for our game at Harrogate. This was up +37% up on the previous game. We are now breaking the 1,400 barrier for every away game. 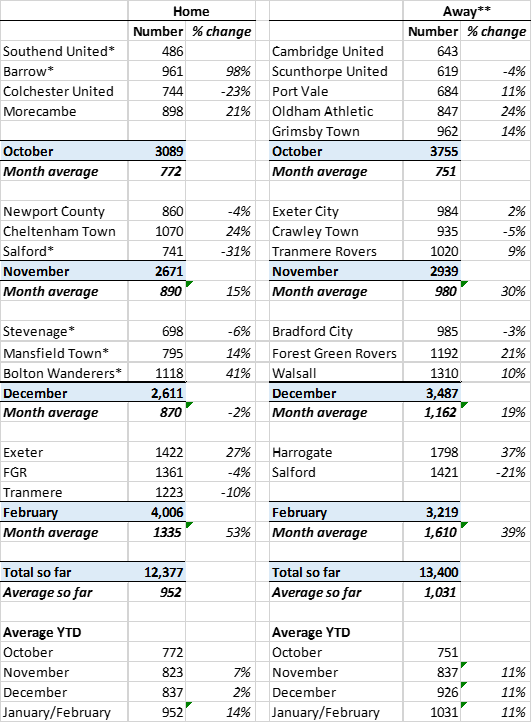 *numbers distorted by individual fixture factors – Southend and Salford very low as we had 1,000 and 2,000 fans in the stadium, and Barrow high due to the special interest in the game.

**The income from the first 500 streams bought by CUFC fans for away games (£8 x 500 = £4,000) is paid to the home club. But by the same mechanism we get the value of the first 500 from every away team coming to Brunton Park. Over the season the net effect of this is neutral, if we sell at least 500 streams per away game.

To read the third update from January click HERE.