United’s under-18s get back into league action with an away trip to face Preston at the weekend, with the lads having prepared with some good friendly fixtures against Newcastle United and Middlesbrough, as well as the annual summer meeting with the Park View Academy. 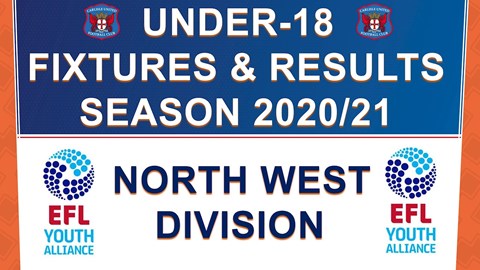 “We’ve been back a month now, and we’ve managed to play three friendlies,” youth boss Eric Kinder said. “All of those games have been played away from home, and we had problems with the Workington friendly because of the Covid test, so we lost that one.

“It’s been better playing away from home because it’s meant that we’ve been able to work with the hosting team having done all of the protocols. I’ve got that to come in a couple of weeks when we play our first home game.

“I had a Zoom call with the football league last week and what we have to do to get a home game on is frightening, but that’s how it is.”

“The three games have all been good,” he continued. “The pleasing thing about them is that the lads have done ok, particularly when you consider that everything shut down for them in March.

“This is always a big period for the first-year lads and I’ve been surprised with how well they’ve settled. They’re here full time now, they don’t get to go home because of the Covid situation, but they’re getting on with it.

“We beat Park View and Boro, and I was really surprised by our performance against what was a good team in Middlesbrough, so long may that level of display continue. “I usually say that October is the stage when they start to find it tough because the weather changes, the dark nights come in, it’s wet, it’s cold and Christmas seems a million miles away.

“That’s when we usually see a bit of home sickness, but they’re all fine at the moment.”

“The dressing room seems a really happy one,” he confirmed. “The second years are good guys anyway and they’ve helped the younger players to feel part of everything. I don’t think there are any egos in that dressing room, and that helps.

“They’re all looking forward to the first game and Preston will be a really tough test for them. They always put out good sides and they’ll be looking to get off to a good start just as much as we are.

“Last season was a decent one for us, and that was after we lost our best two players in Branthwaite and Galloway before the season even started. We had no quibbles about that because they were taken from us for the right reasons.

“Josh went to Leeds and Jarrad was a first team player, and that’s what having a youth system is all about. Then Taylor Charters left us after two games and we never saw him again, but that was also good to see.

“Despite that we still managed to finish fourth behind Fleetwood, Salford, and Preston who all invested a lot in their youth systems. I was really pleased with the way we handled the season overall, and hopefully we’ll see more of the same again.”