United boss Chris Beech gave us his reaction to the narrow away defeat at Scunthorpe shortly after full time on Saturday afternoon. 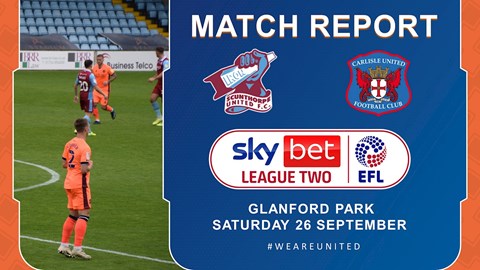 MATCH REPORT: From the Scunthorpe away game

“We’ve had some really good chances and it’s mad really, because we had enough good opportunities to have won the game,” he said. “It was a great first chance for Ethan, and it would have been nice for him to have got off on his full debut with a goal, and I know he’s disappointed with that.

“I also know he backs himself in those moments. The lads kept going, constant pressure, and again a little bit like last week, Southend’s keeper was excellent, today Scunthorpe’s keeper has had a great game.

“I don’t know how he saved Jon Mellish’s header and, of course, Lewis Alessandra’s shot, but he did and that’s the simple fact. We had more shots, more corners, more pressure on the opponent, but we’ve been beaten.”

“It’s disappointing not to have converted some of the good chances because this sport is all about winning,” he continued. “These things happen, it’s football.

“Scunthorpe get their first win of the season and they did it … I’m not too sure how many shots they actually had. I think they only had one on target in the first half, and that’s the one that went in.

“That came from us playing a square ball and I hate square balls. I talk to the players all the time about not doing it, but there’s still no way they should score after that. We’ve given the ball away on the halfway line so there’s still a long way for them to go.

“It happens and they hurt us at that point. We couldn’t hurt them, and we had a lot more chances than they did.”

“I think it’s a little bit harsh to say it was another gift,” he insisted. “The goals against Cambridge and Oldham are definite gifts, but I would suggest this one is just something that happens in football.

“How many times did we see players from Scunthorpe give the ball away, and we turned it over from that and we played. There’s one where Ethan comes on the inside from a loose pass and it’s a curler where everybody stands up because they think it’s a goal.

“Aaron Hayden’s header gets blocked on the line in the first half and then there’s a whistle. The ref gave a lot of soft fouls and as I’ve said before, in the circumstances we have with no crowds, it’s so frustrating to go behind, dominate the game, create more chances and shots and still have to deal with three-and-a-half minute goal kicks.

“And how many minutes does a ball go out of play to take a throw? That kind of thing is very frustrating for me and the players because I want us to represent Carlisle by playing football the right way.”

On how the dressing room deals with the frustration of having bossed a game, but come away with nothing to show for it, he told us: “I’ve told them that Scunthorpe’s opportunities didn’t come by their good play, they came from things that happen at this level.

“We didn’t play bad, we represented ourselves well. Ultimately we’ve lost, but it’s the little things that can sometimes matter, and that’s how it was in this game.

“We saw how we reacted last week, and we need that again now. We could quite easily have scored the first goal against Scunthorpe and we’d have won the game by a clear scoreline. The fact is we didn’t, and we lost.

“The positive is that you look to play football in the right way and to represent your situation in the right way, and the lads did that for us. To be honest I wish we’d play a little bit worse, not create as many chances, but score more goals. That would make it easier to take.

“It’s hard to talk about positives when this happens because we got beat. We were the better team, but that doesn’t really matter, does it. The only fact that matters is that we lost.

“What we do have are things to build on. I’m pleased with the effort and the commitment and with the number of chances we created. I was pleased with how well we hit the target at times as well.

“Well done to their keeper for the saves he made. It’s difficult because we know we’ve been the ascendant team, the better team, but we got beat.”