United’s assistant manager Gav Skelton gave us his reaction to the Papa John’s Trophy meeting with the Aston Villa under-21 side on Tuesday night. 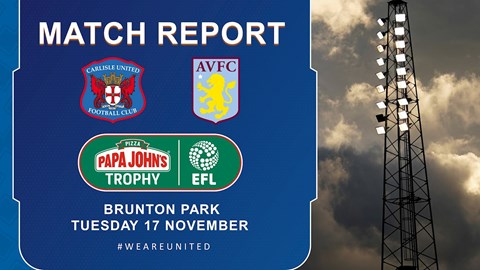 “From our point of view it was a really worthwhile exercise,” he said.  A lot of the lads needed minutes, we played with really good energy and, most importantly, we won the game and got some really good individual performances out of it.

“A lot of our lads are desperate for games and it was a really good competitive game for them in a cup competition. I’m really pleased for the lads, especially the younger ones.

“Look at Josh Dixon, he’s missed the last two years. I’ve seen him do both cruciate injuries so I’m really pleased for him. He came on earlier than planned but he was really good and showed his composure.

“Never mind anything else, it was just good to get him back on the pitch. To get Lewi Bell on, he did well when he came on. Rhys Bennett hasn’t played 90 minutes since February, Danny Devine needed 90 minutes and it showed in the last 10 or 15 minutes the importance of the game for those lads.” 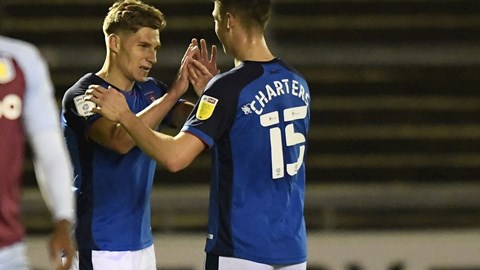 Speaking more about the return to action for local lad Josh Dixon, he said: “I really am delighted for him. He’s a great talent, but the important thing was getting him back and getting him some game time.

“He was alongside Taylor Charters, who he’s pals with, and how good is it for us to see a couple of Cumbrians on the pitch. That’s a fist full 90 minutes for Taylor and he’ll be chuffed with that.

“I think the applause when Josh went onto the pitch was because through the last two years, he’s had to be on his own, working in the gym, he’s gone through it and it’s tough mentally.

“He’s from a strong family, that’s important, but there must have been some tough moments for him. We always joked he gets new friends in the gym when someone’s injured and in there with him for a few weeks.

“It’s good that he’s had his minutes but he now has to kick on. He’s had a taste for it and now has to keep working hard to try and get in the squad and get more game time. There’s still a long way to go but this is a great first step for him.”

“I thought Micah showed his quality,” he commented. “We’ve seen flashes from but he was consistently good through the game. He got his goal, and it was brilliant for Gav Reilly to score, that’s another reason why it was a worthwhile exercise.

“I know people say things about the tournament and that it was a dead rubber, but vital for us as a team and some of the individuals.

“It’s been a bit stop-start for Micah, which is difficult for him to find his rhythm, but a performance like that puts a problem in the staff’s head and the manager’s head for Saturdays. That’s what you want.”

As already mentioned, a great moment on the night was the first goal for the club – an excellent finish – for forward Gavin Reilly.

“He’s had his opportunities, and that’s been the pleasing thing, because he’s continually got into scoring positions,” he said. “When you watch the games back, his movement has got him into those positions.

“Without putting pressure on him, look at Jon Mellish last season, he got into some fantastic positions and didn’t score. He’s got on a run since then and I’m sure Gav, given the opportunity, has definitely the capabilities of going on a scoring run.

“Gav is a player who lives and dies by his goals. I know he was down after he missed his opportunity on Saturday, and sometimes I think he does too much shooting practice, he’s obsessive by it, and he maybe needs to relax.

“As he was about to shoot I was thinking take it closer in, but to see it nestle in the corner will do him the world of good.”

“Like I say, that’s the same for so many of the other lads,” he added. “Gime Toure was suspended for three games and he needed his 90 minutes. Jack Armer got another 90 minutes under his belt and performed well.

“Our keepers Marcus and Magnus got 45 minutes and they’ll feel better for it. The injury to Connor Malley was unfortunate, someone stood on his foot and he’s had stitches in it. A stud went through the boot and kind of split it open. He’s had his stitches so we’ll see how he is.

“Along with that we had some of our first-year scholars on the bench. It gives them a lift and a taste of it to see the matchday experience. They get the opportunity and looking ahead it lets them see what’s expected.”

“Whatever the thoughts are of the competition I thought it was vital,” he coincluded. “We’ve got a lot from it. I didn’t think we let the game die, we played at a really good tempo, we tired them out for the first 20-25 minutes and we could hear their bench telling them to get the tempo down, whereas we were conscious of keeping it going.

“That’s why we got the three goals, we worked them hard physically and mentally and got our rewards. The rest of the group trained hard in the afternoon, the lads who didn’t play, and we’re really looking forward to going down to Crawley. We want to get back to winning ways in the league as well.”