The club held its first ever virtual press conference this morning, with manager Chris Beech taking questions via the Zoom platform from the local media as he continues preparations for this weekend’s FA Cup tie against Hayes & Yeading United with the second countrywide lockdown already now in place. 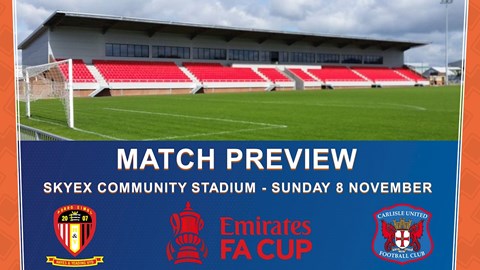 MATCH PREVIEW: Hayes in the FA Cup first round

“We’re in our second one now, aren’t we, and hopefully we can get the numbers down and get back to some kind of mini-normality,” he said. “It is strange talking to the press over a computer but I’ve used it a lot before with happy birthday messages to the fans and things like that through the original lockdown period.

“That actually feels like years ago, but it is what it is. As a staff and players we’ve been very good in terms of trying to make sure we look after ourselves. We’re following all of the policies and procedures which come with working within football during this virus, and that poses all kinds of different situations.

“I do know the EFL are going to look into clubs more individually on how they’re going about that, and I talk to a lot of people around football and we’re pretty much in front of it in terms of what we’re doing.

“That’s quite right because what we want is to make sure we don’t bring anything into the building. We’re like firefighters if there’s a sore throat or a sniffle amongst the team, or with a staff member, because we know how important it is.

“Touch wood because up to now when we’ve followed it up and got the tests done it has just been a sniffle or a sore throat, and nothing worse, but there’s still a process of making sure the player doesn’t connect with another player at that point, until the results are known.

“That’s difficult because you can get a sore throat or a snotty nose at any time. You can wake up with one so, again, it’s just the way it is at the moment. We need a lot of honesty amongst the players as individuals but they appreciate their opportunity to play and they want to protect that.”

Married to that ethos has been a run of excellent on-pitch performances.

“That simply comes out of hard work, honesty and understanding of your opponent,” he commented. “It’s then about putting into practice what I’m trying to get us to do as a team, within a framework, even though the lads can be individual within that.

“However, if you come off plan you have to make sure it works, and the players know that because if you don’t, you’ll know about it. We have some great traits within this team and they support each other, and it’ll be interesting to see what we can now do with it.

“It’ll be really interesting once we get the injured players back into it as well, but there are no guarantees in life, and we all know that even more now with this virus that we’re all having to deal with.”

But with confidence visibly high, we wondered if a note of caution was needed to keep feet on the ground.

“I wouldn’t say I’m cautious,” he replied. “I’m optimistic, but at the same time I’m realistic. We have got one of the smaller budgets and the bookies do tend to back those who have the finances to change things if they’re going wrong.

“That’s fine, because what we have to do is make sure that everybody puts great value into what they’re doing, which they are at the moment. If anybody falls slightly under par or they aren’t quite right, we’ve got players who are desperate to come in and play.

“From all of our league games so far the one I think was a little bit under, in terms of energy, was Grimsby and you could possibly think about changes to personnel after that. It’s amazing when you do think about whether you should, then you don’t, and suddenly the same players are on it, they’re pushing hard and playing well again.

“And that’s after you’ve seriously considered that it was actually the right time to make some changes. It shows you what can happen when you support people but you need to be mindful that it can happen at any stage, so we are in a position where we can make changes if someone is off it a little bit.”

“We said at the start of the season that we needed the majority of our players to be giving 7/10 every game,” he added. “We’re actually getting a few 9’s at the moment as well, and that’s good.

“Again, there are no guarantees, so every player has to continue to work hard every day. The weather is good, so we’re able to train on the grass, and I’m so thankful to Preston who are going to let us use their old training ground as we head to London on Saturday.

“That means we’ll be an hour down the road and we’ll be able to train properly, and we can have the full squad there because of the location. That means everyone will train, and not just the 18 who make up the match day squad.

“Working hard is what we do but, whoever we play, and we can’t take anything for granted because as soon as we do we can easily start going backwards.”