United made it five wins from five home games at Brunton Park on Tuesday night with another fantastic performance full of energy, determination and grit. 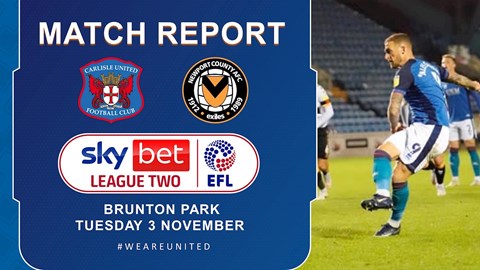 We spoke to manager Chris Beech about the game after full time.

“We’ve scored another three goals in our third consecutive home game,” he said. “It’s a shame we conceded, but for 84 minutes we were pretty dominant.

“I have a lot of respect for Michael Flynn and the team he’s got together because he’s been doing this for a few years at Newport. They’ve got a good squad, but we’ve beaten them when they’re at the top of their form which is great credit to our players and everybody involved.

“We were comfortable for the majority of the game and we still did good things after they’d scored. We could actually have scored more goals, even at 3-2, so we’ve just got to keep doing what we’re doing.

“It’s actually amazing because Nigel [Clibbens] told me a stat the other day which was that in the 92 clubs we’ve had the highest turnover of players, and we’re the youngest team in terms of games played.

“That includes Lewis Alessandra and Paul Farman who both have a lot of experience. It’s great credit to everybody, to go on there and put a plan in place to then express themselves individually within that plan is superb.” 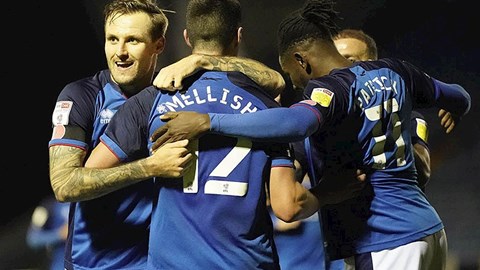 GALLERY: Thrilling win for the Blues

With the players coming out on top in all of their recent games we asked the gaffer what the secret ingredient was.

“Football isn’t complicated,” he told us. “Some things change, our pitch is great thanks to Dave [Mitchell] and sometimes pitches aren’t so good, but the game doesn’t change.

“I hear all sorts of different things about what you should or shouldn’t be doing, but I just want us to train hard and play football without complicating things. I’m quite a traditionalist in terms of energy, commitment, character and spirit, then technique tops that up.

“I do believe we’ll win a game by a really clear margin, and we haven’t had it yet. It could have been tonight because we were totally dominant for 84 minutes.

“We could have been more goals ahead at half time, but we weren’t. They were always going to come back, that’s why they’re at the top of the league. They’ve got 25 points from ten games, if they carried on like that they’d be looking at getting over 100 points for the season, so it’s amazing we’ve done what we’ve done.”

And on Fortress Brunton Park, he said: “Five home wins from five home games is good, but we’re only a quarter of the way through the season. We’ve got to keep going. There will be no change to anything.

“The boys will warm down on Wednesday and the lads who haven’t played are in the gym now. We’re training late on Wednesday so we can stay and watch Eric’s youth team play in the FA Youth Cup against Chester.

“I’m going to try and get a roast dinner out of the Chairman in the auctioneer before that game! There’s no pressure on us. I think we’re back up into the top five but we’ve just got to keep going.

“Our budget is low but we’ve recruited intelligently, we want players with ambition and room to grow. Jon [Mellish] is a great example of that, along with everybody else. There are a lot of players not playing so if we’re missing a few players, we’ve still got players wanting to play who are young and hungry.

“Those players are working really hard individually, and that’s why we’ve recruited the lads we have. You can see the lads are fit. We blasted some very good players tonight physically.

“Callum [Guy] was all over everybody in midfield and I think there was only once that a player got away from him and played forward. He managed it, but he was massively supported by Jon Mellish and Joe Riley.

“The front three were excellent and we were very solid. They took off one of their best players at half time in Abrahams because it wasn’t going right for him. Sometimes it isn’t because of them, it’s just because of us and what we’re doing.

“We’re not always going to be able to do that, but we got our just reward in this game and we definitely deserved the victory.”

Having spoken in the recent past about the need for a ruthless streak, there was real quality once again in all three of United’s goals.

“The penalty from Lewis Alessandra was in the side netting with plenty of power and it was just out of the reach of the keeper,” he told us. “He practices them and he’s hit it so well. He takes them into different corners, down the middle or even chips.

“We deserved the penalty, I won’t go into too much detail, but I’m proud of the fact we played honestly and won the game.

“Then Jon does what he does. He could actually have had a hattrick, or more, because he’s getting into these areas all the time. He’s amazing considering where he was. Just thankful he signed that contract before he started scoring his goals.

“If we had our shooting boots on we could have been three or four up at half time, but overall we’re delighted that we beat the league leaders with the current run of form they’ve been on.”

“I don’t think we gave up the goals, you’ve got to be respectful of your opponents and what they can do. It was just a case of good players landing on the ball when it dropped perfectly for the two lads who slotted them away. It just happened to be like that.

“But like anybody, if the other team gets a goal it doesn’t half turn the whole psychology of the thing round. It’s a shame because we could have scored more.

“I’d like George Tanner to stop the cross, then the ball isn’t in that area but, like I say, these things happen, and they’ll happen a lot more.”