United boss Chris Beech spoke more about the weekend away victory at Cambridge as he starts to prepare his side for back-to-back home games against Colchester and Newport. 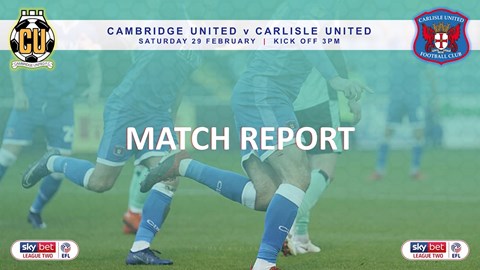 “I thought we deserved the three points and I’m delighted for everybody that we got it,” he said. “I was pleased with our attacking intent, players taking extra touches in last third, and pleased with the goals we scored.

“I thought some of our play was excellent, and the defending for the majority of the time was very clean and clinical, in both boxes. I was really pleased with the character of the team when it was asked and challenged, they stood up and said - no, we’re going win this.”

“We’ve dominated a team who haven’t lost under their new manager,” he continued. “To come here and get two goals, and it should have been three and four, I’m pleased and proud for the players and for our supporters and the club itself.

“I keep talking about us being united. Carlisle is Carlisle United, you’ve got to all do it together. It’s not just me, it’s staff following me, professing my message backwards, making sure there was no little wriggle room, hiding in cupboards and different areas of the ground.

“The message is simple but if you’re honest, work hard, respond to setbacks very well, they’re not only representing themselves and their families but the Carlisle characteristics of hard-working people.”

On the near 350 fans who braved the weather to make the journey to back the Blues, he told us: “It’s great that we can give them a performance like that. It’s the kind of game where they can enjoy being a Carlisle United supporter.

“We’re a very well supported club and I’m thankful that they’ve seen that skill level. It’s probably the best weather we’ve had for a while on a matchday, even though it was still very windy.

“It allowed Omari Patrick to show his skills better, and we saw the link-up play from Lewis Alessandra. We had good shape, with structure in midfield, and Jon Mellish was excellent at winning headers and tackles.

“I said to him that he’d have Newcastle United ringing up about him if he could just put the ball in the back of the net. I’ve been working with him every day on finishing, would you believe, on those angles, on his left foot.

“I was really pleased with the boys at the back, they were put under severe pressure. What I really enjoyed was our collective team spirit to try and get our three points. At a position of strength we had more chances to add to the goal tally, but to score twice against a team who haven’t been beaten at home under the stewardship of a caretaker manager is an excellent effort from everybody.”

The game brought a thoroughly deserved first goal for the club for Lewis Alessandra, who set United on the way to victory with a ripping first half volley.

“He’s a willing runner, very technical and very intelligent, and it was a no-brainer when I knew he was available,” he said. “It was excellent business from the club. They call it a monkey on the back, so he’s got it off his back. Hopefully he’ll go on to get more.

“His work rate can never be questioned and he’s a fit boy. I’m really pleased for him. I imagine it was on his mind that he hadn’t scored. I’ve been coaching a lot for our forwards to take extra touches. A lot of the time we shoot too early or play a harder pass.

“We worked hard on the way down, on the astroturf at Peterborough, where we looked at reducing unforced errors. It creates pressure on an opponent when you keep the ball and pass it well, but pass it for a reason with forward movement, not just pass it for keeping it. Who values 25 passes for your team when it’s the opposition that then has a shot.

“With the second goal it was great that Harry [McKirdy] took it, when Elliot had just been substituted. Hayden was at the back post, Byron was close, and I think Nick Anderton only scores goals with his right foot!

“We were asked questions late in the game, as I said earlier, but it was a game we deserved to win. Having said that, I thought we got a bit sloppy in midfield second half, when we could have played passes forward to support us running forward, hence why I looked at making some slight changes.

“Taylor [Charters] came on and he was brilliant. He stopped the ball from being played down the line, he’s so good at shooting, he should have hit the target when he got his chance on that left foot.”

The victory also confirmed the Blues as a difficult side to beat on the road, with them now six games unbeaten on their travels.

“I think the biggest milestone was a comment off my dad,” he told us. “He came to the Morecambe game and he told me that he could see the difference between the two teams. He felt it was amazing in terms of how we’re playing, how the lads are fighting, the quality of it and the people doing it.

“Even if you look at the bench at Morecambe, it was completely different. The strides that have been made are really big in a short space of time. He said just take stock and think about it. Because he knows I always want more. But I still want more.”