When we asked Carlisle boss Chris Beech [after the Cambridge game on Saturday] if the recent run of six consecutive away games unbeaten + just one defeat in nine games + a 17-point gap to bottom spot = an opportunity to start looking beyond this season, the emphatic response was NO!

“I don’t want that mindset,” he told us. “I want to finish as high as possible. This group of players deserve to finish higher, and our supporters deserve to see us climb up that league and be part of it.

“The Cambridge game gave everybody another lift and it becomes a great weekend, because that’s what the three-point feeling gives you, a great weekend. I want more of that between now and the end of the season because I think everybody connected to the club deserves it.”

We completely agree with that.

So we’re looking to build on the wave of #GoodVibrations as we ask you to get behind the Beech Boys through the remaining six home games.

We’ve targeted the visit of Leyton Orient at the end of this month as a special day as we slash prices and push for a bumper crowd ... and ‘Wouldn’t It Be Nice’ if we added to the ‘Fun, Fun, Fun’ if we asked you to ‘Catch A Wave’ along with us!

We’re looking for another huge crowd – over 10,000 of you came along last season to our big match with MK Dons– so let’s aim to beat that … and who knows, the weather might just have warmed up enough to let us all get the Hawaiian shirts on and the beach balls out.

Cut price ticket entry across all age groups is the order of the day, with huge savings to be made on normal match day prices – and there will be NO price increase on the day of the game!

Purchase tickets in person from the main ticket office and the Blues Store during normal working hours, or from the ticket pod in the Cumberland Building Society (Thursday 10am to 3pm, and Friday 10am to 4pm, before each home fixture).

United’s director Suzanne Kidd said: “Our #8kforMK ticket promotion was a huge success last season, and we see no reason why we won’t get the same response again.

“The Beech Boys have really got it together on the pitch and that has been reflected in the performances and the results. Chris is asking for more and more from his players, even though there have already been real signs of improvement, and we want to show him that the supporters are ready to back him all the way.

“It was on social media that the first Beech Boys mock-up appeared, and it’s such a good theme that we felt we had to adopt it for this promotion. The football we’ve seen has been really enjoyable over the last few months, so let’s get together, come along in huge numbers and demonstrate to the Beech Boys, who have worked so hard, just how passionate we all are about this football club.”

Chief executive Nigel Clibbens said: “We haven’t put a number on the target for this promotion, as we did last season, but it is clear to everyone that we want to beat the 10,000 plus numbers we saw against MK Dons.

“Things have moved on since then, and in particular since Chris came in. The team are playing in a way that has got everybody talking again, and that’s fantastic to see and hear. It suddenly feels better with that confidence and optimism, and we all know what a difference our crowd can make when they’re up on their feet and giving us that Brunton Roar.

“We’re hoping people will get behind this campaign and come along to enjoy the game in what should be a day to remember – don’t miss out!”

Ticket office manager Louise Banks said: “We saw that the pricing structure worked for the MK Dons game last season, and the feedback from our season ticket holders was positive.

“The discounts on offer are equivalent to up to a half-game saving on our season ticket packages, so we know they’ll be behind us as we look to pack Brunton Park and generate even more of those #GoodVibrations.

“We think the pricing structure will help as many fans, families and youngsters to get to this game as possible. Everybody is saying how brilliant it would be to see Brunton Park full and bouncing again. The manager has talked about the potential he feels this club has, and this could be a real demonstration of that.

“It’s affordable, the team are playing some excellent football and it’s a chance to see the Beech Boys in action! We look forward to seeing everyone come along on the day.”

Buy a ticket online as part of our #GoodVibrations match promotion and you will be entered into a raffle for the opportunity to win a 2020/21 season shirt signed by the first team squad.

Purchase tickets in person from the main ticket office and the Blues Store during normal working hours, or from the ticket pod in the Cumberland Building Society (Thursday 10am to 3pm, and Friday 10am to 4pm, before each home fixture).

Get involved – do your bit to create some #GoodVibrations

We’ll be running a Ticket Donation Scheme once again for the #GoodVibrations game against Leyton Orient.

This is a fantastic way for individuals or businesses to help to get young people or local groups involved by purchasing and donating tickets for them, to allow them to attend the fixture.

You can buy any amount of tickets and donate them to a community group or school of your choice, and we will make sure everybody knows about your generosity!

If your business is interested in getting involved in our ticket donation scheme, please email commercial@carlisleunited.co.uk for more information. 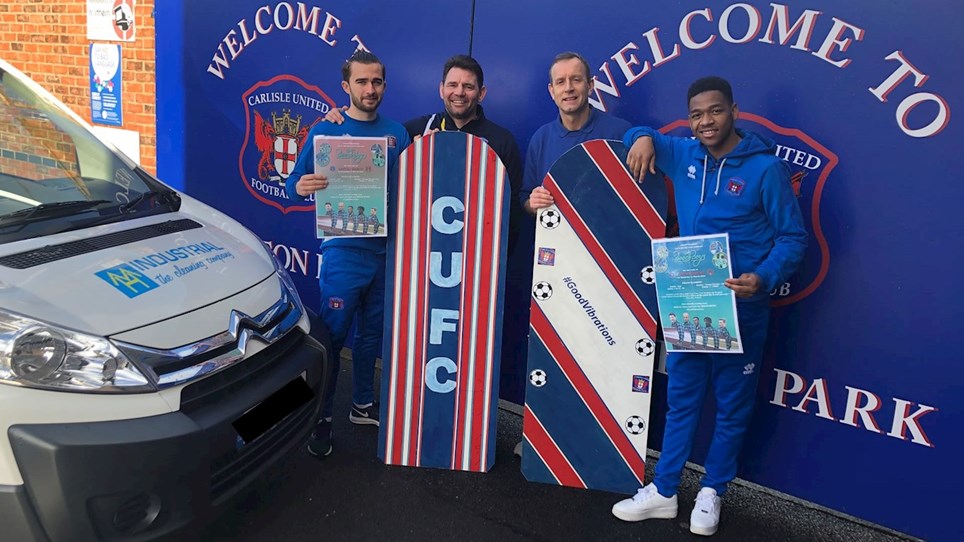 
A huge thank you goes to Mark Harper from local cleaning specialists MH Industrial, based in Crosby On Eden, for his donation of 100 tickets to the #GoodVibrations ticket donation scheme.


Kingmoor Park’s managing director Neil McIntyre is a huge fan of the Blues (along with his son Alfie) and the pair can be found at Brunton Park for every home game, so it came as little surprise when...


Long-standing club sponsor and supporter Rickerby were amongst the first of our local businesses to ride the crest of the wave of our Leyton Orient #GoodVibrations ticket donation scheme when they...