United were clinical at the New Lawn on Tuesday night as they backed up a ruthless three-minute spell in the first half, which brought them two goals, with exactly the same after the break as Josh Kayode added to a career-first hattrick for Nathan Thomas. 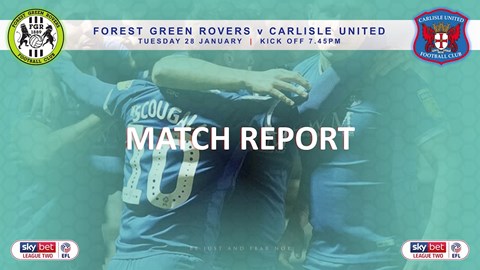 MATCH REPORT: From the Forest Green away game

“To come all this way on a Tuesday night and see Carlisle score four goals, I hope the players dedicate the win to them and that Nathan does the same with his first ever hattrick.

“Every single goal was excellent and I’m pleased that the fans have seen Josh get his first league goal as well as Nathan doing that for the first time in his career. That’s just nice for everybody. We’ve got to continue this hard work now and keep working to get better.”

Not getting too carried away with the performance, he said: “I don’t think the football was too good but the pitch was heavy. Having said that, the attitude of the players was excellent.

“I said to them at half-time that we’re getting in a good habit of getting 2-0 up, and the next goal is then so important. We scored straight away with a good through-ball from Elliot Watt, again Alessandra running off the ball to get the penalty.

“Nathan picked it up and stuck it in the back of the net. It set the second half off great, that third goal is so important, because it’s either 3-0 or 2-1.

“Josh got the other goal and I’m pleased for him because he gave it his all. There’s one thing that League Two centre-halves don’t like doing – and ours are quite good at it actually – is running.

“He’s got to play to his strengths, which is movement and running. He did it at Oldham for the first 10 minutes, Piergianni and Wheater had him, but after 10 mins there he started freeing up and running. If he runs he will cause problems, he got to grips with it, started running, and what he did after that was excellent.

“His mum and dad are away at the moment, which is a shame, but that’s his league debut in terms of starting a match and he scores a goal. I’m so pleased for him. He had the cold at the weekend, was due to start the home game, but this will make up for that with him.”

The stand-out goal from the night was a top-drawer strike from Nathan Thomas – his second of the evening – which literally flew into the top corner.

“I’ve never seen one as good as that in my whole career, in terms of how the ball moved, left to right,” he commented. “When it was about six-yards out from the post it was about three yards wide of the goal, then it swerved back in.

“It’s the best strike I’ve ever seen, just amazing. On those Sky cameras, you can see every raindrop, it would have looked brilliant. But, of course, we don’t work at those levels, but that was still a world-class goal.

“I was right behind it in the dugout as it went in and I could watch it over and over. He must love playing Forest Green cos he scores against hem all the time. I’m so pleased for him because I didn’t know it was the first hattrick of his career.”

And on the overall performance, he said: “Even though we weren’t on top for the first 10 or 15 minutes we held a good shape and they weren’t really hurting us. We showed discipline in different things and we worked hard.

“Discipline isn’t just about arriving on time or wearing the correct kit, but staying in shape, running hard, supporting teammates is a different discipline. The boys are starting to show the winning traits I’m asking them to do, training hard to do it, now have to keep those standard high and look for consistency in everything they do.”

Having been reminded that it was 367 days since the last time United had won back-to-back league games, he commented: “It’s good that we’ve broken that and we’re breaking records at home, we’ve had back-to-back clean sheets, we’ve stopped getting beat, and we knew we were losing less and we’re winning more, so it’s a good combination.

“It’s because there’s more structure to the team, we’re winning the ball back higher and doing all the things I’ve been saying for the last eight to ten weeks. I’m really pleased for the club and the people who support it.

“Supporters want to see the club do well, the guys who’ve travelled all this way to watch us tonight, like I say, if I was Nathan I’d be dedicating that hattrick to them. They’ve seen one of the best goals I have ever seen and they’ve seen a win. We are improving, the lads have represented us and themselves well, and I want it to continue.”