The Blues go up against table-toppers Swindon Town at Brunton Park on Saturday [kick off 3pm] and we sat down with boss Chris Beech to get his thoughts ahead of what is another important game. 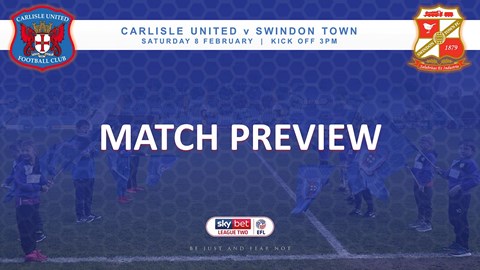 MATCH PREVIEW: A look ahead to the visit of Swindon

“They’ll bring a big challenge,” he said. “They’re top of the league because they do things very well. They have some really good football players that score a lot of goals, backed up with a lot of experience, and they’re a very buoyant football club.

“It’s no bigger challenge than taking on other teams in the league in terms of your preparation, it’s generally the same. You do individualise certain elements, because you respect them, recognise certain individuals doing very well – Doyle, Yates, etc.

“They’re strong in midfield, excellent passers of the ball, and an excellent physicality in the combination of two midfield players, backed up with experience. They have players doing well in all areas and they’ve got a very strong bench as well. If they need to make changes, they make them.”

With Eoin Doyle leading the charge to win the golden boot this season, he commented: “It makes it a bit easier for them, doesn’t it.

“He’s done very well for Swindon, went back to Bradford, now they’ve got him back, so well done to them. It just gives us a good challenge. With Hope and Yates as well, I’ve got ideas of how to deal with them and I’ve spoken to the lads about it, on how we can try and combat their strengths.

“With Doyle, and the number of goals he’s scored, he’s almost guaranteeing his manager a goal. So, what a great place to be for Richie [Wellens]. But we’ve got to do our best to make sure he doesn’t get it.

“He didn’t manage to do it for Bradford but he’s flourished with Richie. It happens sometimes. Hallam has scored two since going there, and I can only thank him for his commitment for the 12 games he played for me, in terms of what he did and how he went about his business. 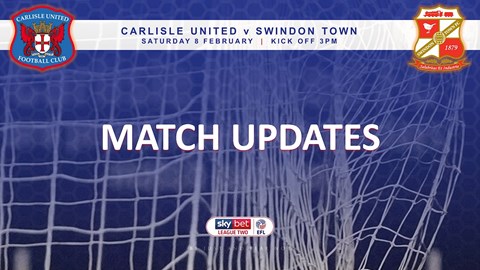 MATCH UPDATES: Tips ahead of the Swindon game

Having spoken about the opposition, he said: “As ever it all depends how we are and what we do. There’s always some sort of anomalies in terms of matchday, it’s how we adjust, whether it be the opponent are on top, whether we’ve had a couple of lads unavailable who we’ve planned to play, or, and it’s forecast, pretty horrific weather conditions.

“You have to try and bring it all together and adapt that plan to make sure you’re in a positive position at 5pm. I’m expecting a good game, a tough one. We most definitely are not going to get it our own way, we didn’t last week, but I was really pleased with the character of the team.

“It’s a completely different challenge to that. All the pressure’s obviously on Swindon. I know managers will play it down, but they have got a massive budget, because I do know of some of the players they’ve recruited. I did have a little knock on the door myself and didn’t get them.”

“The points are obviously important for both teams,” he continued. “We’ve obviously got a bit of gap at the bottom now, but I just want to concentrate on the actual game itself, everything else doesn’t actually matter.

“It depends how we defend, attack, respond to setback, get the ball down and pass it, how we deal with set plays for and against, these are massive factors in lower league football, and how we go about our general play. It’s on how we want to represent Carlisle characteristics of hard work, honesty and endeavour. They’re vital in winning football matches.

“Grant and Doughty are good in midfield and they’ve got a good balance between them. They’ve got a right-footed left back and Caddis at right back with a lot of experience. People might look at Caddis and think we can get at him because he’s a bit older, but he uses his brain and knows how to use his body.

“Players like that also get help off the referees and assistant referees because they get sucked into what the experienced players say. We’ll have to be at our best to make sure we can compete and turn the point we’ve got at kick off into three.”

On the feeling in the dressing room following the recent good run, he said: “Confidence is high, but I’m very vary of the fact that when we have played teams at the top of the league we’ve had our fingers burned in moments when we’ve looked strong and solid, in terms of not conceding.

“The pressure really is on them to make sure they can back up their investment and get promotion. On us it’s a challenge for us to say ok, we’re taking on the best in the league, we understand we’ve not done too clever against Crewe, Plymouth and Colchester, but we did do excellent and score five goals against Cardiff in two games.

“We are scoring a few goals in the league now and a lot of goals on the FA Cup run, and we’ve managed some clean sheets in between. It’d be nice to get some clean sheets and score lots of goals and beat everybody from now until the end of the season, but we know football doesn’t work like that. It’s a good opportunity for the players to say ok, they are a good side, but let’s have a look.”

And on the part the fans can play, he said: “I think they’re vital on any occasion, to be honest with you. It helps set a good mood, a positive mood, and like I’ve said before, it’s our responsibility to make sure they’ve got something to chew on and shout about.

“If you look in a dictionary at how to define the word supporter it’s to give somebody else your best wishes, your will and your help. That’s something they can give us, it’s a two-way street.

“The fans have been absolutely brilliant. They just want to support their team and their players putting hard work in and doing their best. There are going to be mistakes, and that’s when the lads need that extra support.

“I want to give them more moments like we saw at Mansfield. I was a fan at Mansfield when that goal went in, the players were all fans and we were all celebrating because it was an excellent feeling. We knew it was a game we didn’t deserve to lose, and we probably should have been winning in the first half, so to go two goals behind made that last goal fantastic. If you look closely on the video you posted on Twitter you can actually see my son right in the middle of it as well, so I hope I don’t get in trouble!”