United head off to Cambridge this weekend to meet up with another team who are enjoying a good run of form of late. 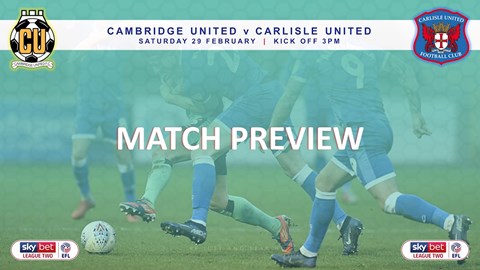 MATCH PREVIEW: A trip to the Abbey

The Abbeymen are unbeaten through February, with caretaker boss Mark Bonner having made them a much tougher prospect to come up against since he took the reins at the end of last month.

Speaking about the game, Carlisle boss Chris Beech said: “It’s been another good week and as we grow and progress to Saturday, it all comes together. That’s where we are at the moment.

“The lads have prepared well and we’ll do our homework on Cambridge, who are doing very well at the moment. It’s obvious looking from outside without knowing him [Mark Bonner] that the players are responding to him.

“He must have had a good close relationship with them prior to becoming the caretaker. He deserves the job in terms of what he’s done, but sometimes in football these things happen, they come onto your toes like they have. He’s adapted and the lads have responded.

“Good luck to them and long may it continue for them, but we’re going and planning to give them a challenge, break up this great form they’re in. I think they’re second in the league form table, we want to go there and show we’re a competitive team that represents Carlisle and its supporters very well.” 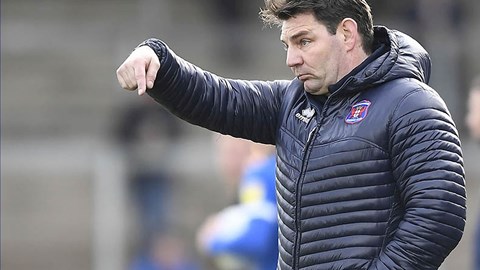 INTERVIEW: You always find a way

With just one defeat from the last eight games for the Blues, he commented: “To be honest with you, the games we’ve won we’ve probably had less possession and less dominance. In the last three games we’ve been outpassing our opponents by 100 to150 passes.

“All of that can be meaningless because all people are interested in with this great game of ours will always ever be about winning. Whether you deserve it or not, you’re judged on that. Nobody considers your training facilities or preparation, or is bothered what the weather’s like after matchday, the first two questions anybody asks in anybody’s house, schoolboy football – did you win, did you score? We can dress things up but that’s basically what this great game of football is all about, winning.

“That’s why I feel our players deserve more for their efforts. It’s difficult, what I said the other day about trying to win a 100m race if you start 20m behind it, you’ve got to run quick to get your gold medal.

“We did run quick on Saturday but not quite quick enough, because we gave ourselves that 20m disadvantage. It would be nice if we don’t do that, and grow into it, and get what we need from it.

“But we need to make sure we get that last third entry, hit the target more often, work the opposition goalkeeper more. Our set plays are good now. There’s a lot of good things happening. The players deserve three points, we haven’t got what we deserve, so we have to make sure we go and get them.”

As to what we can expect to see from the opposition, he said: “I read their manager’s comments about their game against Plymouth, he was very pleased with how they kept a clean sheet.

“But reading it, it looks like they were quite dominated. He wants to pass the ball more, create more chances, get more shots off, and things like that. They’re all traits everybody shares, that’s what we want to do, and we want to do it a little bit better than Cambridge on Saturday.

“They’re very good. I’ve watched a lot of their football, especially recently, and they’re all in on what they’re trying to achieve. You can see that on their bench when they score a goal, you can see the players that aren’t playing are quite happy, they’re probably not to be not playing, but are supportive of what’s going on.

“They’ve got an outside opportunity to have an unbelievable finish to the season. As a caretaker manager in his position he would be all over this moment for him. Things could change quite quickly for him. He could end up not going to Cambridge but going straight to the Championship if he wins all those matches.”

Coming up against Cambridge tends to bring discussion of long ball tactics and big players looking for big headers, but United’s gaffer suggest that is no longer the case, with Saturday’s opponents capable of producing so much more than a punt and chase up the field.

“John Beck left Cambridge a long time ago, so that’s not fair at all,” he insisted. “I’ve watched a lot of their videos and they’ve got players who stay on the ball in the last third.

“They take extra touches, check, turn, and they have players supporting that three or four-yard pass. I know they’ve talked regularly about getting back to basics, but that will be more to do with general shape of 4-4-2 or 4-4-1-1.

“It will be more to do with having a higher energy, playing in a position, and the fundamentals of being a defender, winger, striker. They’ve probably simplified the message and the lads have bought into it, but they’re definitely not a long-ball team.

“For them and us the important thing is picking up three points. Winning is important wherever you are or whatever it is you’re trying to achieve. It’s a great feeling. Three points is vital.

“As we look to gain Saturday’s three points, as a club I’m always asking our staff and ourselves to develop tomorrow’s, constantly looking at winning traits, behaviours and characteristics that make us stronger, and we have to look to achieve that on Saturday.

“I’m looking forward to the game, it’s another good test, and it gives the players another chance to show everyone that the progression we’re talking about is still coming together for us.”