United were at the Sunderland training facility on Wednesday afternoon for what turned out to be a tough test against a strong home side. 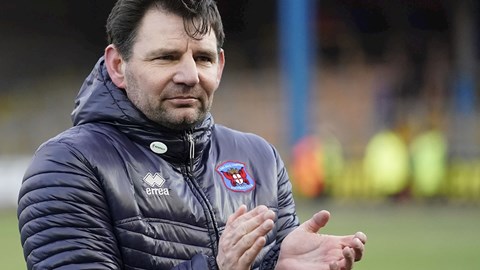 Speaking about the game, boss Chris Beech said: “I’m thankful that they allowed us to go across to play the game. We’ve got a good relationship with the staff, Gav has as well, and so has our youth Department.

“The lads played an under-17 game there when Saturday’s youth game got cancelled, so we utilised the opportunity for us to go there this week. They utilised it as well by playing all their substitutes from the previous game.

“Sunderland had a lot of good players out and they were very professional. I don’t think they got told until after their game against Fleetwood, Tuesday night at 11pm, that they were playing the next day.

“They’ve prepared to be part of that Sunderland team that played Fleetwood at the top of League One. Three of them got on, one of them played about 30 minutes for the first team then he’s at the training ground the next day scoring goals against us.

“Great credit and professionalism to them. It’s good to see that from my perspective, to show our players, so they can look at them doing that. The boys we had, it was everybody really that hasn’t been playing and they applied themselves very well.

“It was quite a close game for parts of it. I was quite pleased with the energy and efforts of the lads, but of course you always want a little bit more.”

And the game was another opportunity for trialist Callum Harris to get minutes under his belt.

“He’s desperate for an opportunity,” the gaffer told us. “He’s been training with us for a good two to three weeks now. We spoke at length after the game, it wasn’t the best of games for him, but he has shown some good traits in training sessions.

“It’s something we’ll continue to look at and he’s happy for that to happen. I’ve told him, for us to grow, get stronger, improve, you need to be a significant difference to what we are. Off yesterday’s showing it wasn’t quite like that, but also it wasn’t quite enough to say thank you for your efforts and try somewhere else.

“He’s got a good enough character to say I know I’m better than that and I want to show you, so I’m quite happy to leave that door slightly open at the moment.”

“I have to say that Ryan Loft did very well actually,” he said. “I played him on the left, outside left, and he did great. He ran at Sunderland’s experienced back three.

“He created the first goal by powering down the line and fizzing a cross in from about 50 yards that they couldn’t defend and headed in their own goal, so we went 1-0 up. He scored a goal at the back end of the game when it had drifted in terms of scoreline, but he worked harder and showed more attitude to running and recovering.

“He’s had a little bit of an issue in terms of being part of a disciplined group of people, because we’re trying to improve that all the time. He’s responded well to the conversations we’ve had, that’s all he can do as a player.”

INTERVIEW: We'll continue to look to do things properly


United face Grimsby at Blundell Park on Saturday afternoon and we spoke to assistant head coach Gav Skelton about the game as the Blues continue to prepare for a double-header of tough away fixtures.


The return to the starting line-up for midfielder Jack Bridge, who was just one of many to give a potential man of the match performance on Tuesday night, highlighted once again the level of...


The Blues recorded a comfortable home victory over Newport County at Brunton Park on Tuesday evening and we spoke to Gav Skelton shortly after full time about what had been another solid performance.


The Premier League, EFL and PFA met today and discussed the growing seriousness of the COVID-19 pandemic.


Blues Lottery and Premier draws scheduled for Friday 27 March will hopefully now take place on Friday 24 April, depending on the government review on the current three-week lock down.


The EFL Trust continues to support Network Rail and the British Transport Police (BTP) to help tackle the increasing number of people risking their lives on the railway and in the desire to spread...