Former-Manchester United scholar Joe Riley admitted that a positive conversation with manager Chris Beech was enough to convince him that his next move was to head north to Brunton Park. 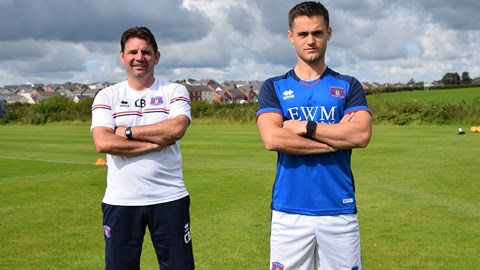 Speaking about his deal this week, he said: “The gaffer didn’t have to say too much to convince me to come here really.

“I spoke to him during the off-season and lockdown and he told me that the lads are really looking to push on this season, and to be competitive in the league.

"Being a competitive player myself and hearing that from the gaffer meant it was something I was excited to buy in to."

“The lockdown period has been weird for everybody, and I think there were over a thousand players out of contract, which has meant it's been stressful for a lot of people," he continued. "I’ve just made sure I’ve kept myself fit, which I know all of the lads have done.

"It’s been great to have been able to get my contract sorted out early doors and I’m really grateful for the opportunity I've been given.

“It was important for me to come to a club where you know everyone is buying into the same idea and everyone is on the same page in terms of what we want to achieve. The gaffer has talked about us being a really competitive side and pushing on, so it was an easy decision for me."

“Another thing the gaffer talked about is us having a really tight knit group of players that are all ready to fight for each other," he told us. "I’ve trained with the lads a few times now and it does feel like a really good group.

"We’re all getting on well with each other already and the moral within the group is high. I was with Omari [Patrick] at Bradford and I’ve always got on really well with him. It’s nice to come in and know a couple of lads already, because I know a couple of the other new lads as well."

As to what he wants from what is an important move at an important stage of his career, he commented: “I do feel like I’m at an age where I really want to prove myself.

"I’ve spent a lot of time in academy football but it’s about time I put my marker down in first team football now. I feel like this is the right place for me to get the opportunity to do that.

“I’ll give my all to the club because I owe them everything for giving me this opportunity in the first place.

“I’m very focused on what I want to come here and achieve. I had a tough year last year with an injury, so lockdown and the time away from football has made me so hungry for this season to start.

"The fans will see that hunger from me this year and it’s the same for all the lads. We’re all ready to go and we're just excited about trying to push for promotion this season.

“I think my main aim for the season on a personal level is to be playing week in week out. That comes down to me, it’s about how I perform in training and in games.

"I’ve got to prove that I’m a player that the gaffer wants in the team every week. Whether he wants me to play in midfield or at full-back, I’ll always give 100% and contribute to what will be a positive year for this club.”

And answering the dreaded - how would you describe yourself as a player - question, he said: "I’m the type of player who likes to create and I also want to try and score some goals this year.

"I like to get up and down the pitch and try and excite the fans, and that’s what they can expect from me this year.

“The squad is coming together and there is real competition for places, which is a good thing in my opinion. We’ll all push each other, and that competition is what makes you grow as a player.

"I think that’s what you need if you want to be a side that is hopefully going to push for promotion. If you’ve got that competition it tests you and improves you as a player."

And we couldn't let him go without talking about his time with one of the biggest clubs in the world, which included a debut in the Europa League and a number of inclusions in the match day squad.

“It was obviously a huge privilege to be at Manchester United all of my life," he said. "I was there from the age of 8 until I was 21, and I learned a lot.

"It’s time for me to put that into action and play first team football. The physical side of things is a big step up in League Two compared to academy football and I just want to improve myself as a player.

"I enjoyed my time at United but I really feel ready to kick on and play proper men’s football now.

“It’s every kids dream to play for Manchester United and I was no different. I’m a fan of the club and I’ve got some great memories from my time there, which I’m really proud of.

"But I don’t want to be sat on the bench or playing reserve football any more. I want to be playing every week for this club and do everything I can to try and push this team forward."

Click HERE to watch an interview with Joe Riley on iFollow United now.