United’s busy August continued on Monday when experienced stopper Paul Farman joined the ranks at Brunton Park, and he immediately spoke about how much he was looking forward to ‘getting back to normal’ now that the finer details of the contract had been sorted. 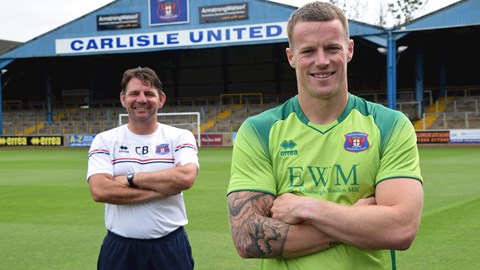 “It’s a good whirlwind,” he said. “It’s been something we’ve been speaking about and I’m just happy that we’ve got it over the line. I can now get started with training and enjoying playing football again.

“I’m just looking forward to getting on with that now. I’ve been doing bits, but nothing that can replicate working with a squad. You get a bit of banter as well as the training and you do miss that.

“It is hard for players in the current climate and I’m excited about the fact that I’ve got something good to look forward to. Another good thing is being back up north, particularly with me being from the north east.

“Being from up here was always going to be a factor, and it’ll be nice to get my family to the game along with some of my mates, once we’re allowed to do that again. I’m sure they’ll enjoy that, so it did play a bit of a factor, of course.”

“Speaking to the gaffer played a big part as well,” he added. “I’ve watched what he’s been talking about on Twitter for the past couple of weeks and I think the main thing for me is that the teams that do well are those that have a great togetherness.

“That’s something he spoke about. When you have a squad that’s all pulling the same way in the dressing room, and they enjoy coming in to play football, there’s not a better feeling for a footballer. The teams I’ve been in where I’ve done well has been down to togetherness and everyone pulling their weight.”

And with the manager having spoken about the enthusiasm he saw in the experienced keeper when he was discussing the move, he told us: “I just love playing football. When you’ve done it from such a young age it’s all that matters, especially with what’s gone over the last few months, because that’s scary.

“It’s been such a long time since I last trained with a group of players since the lockdown came in that I’ve just missed it. It’s getting back to normality now instead of just being a house dad and getting in my partner’s way.

“The lockdown happened so quickly that it was nothing you could really prepare for. At my last club I was in training when we were told we had to go home, and it just kept getting extended. It’s hard to keep fit through that, especially as a keeper, because it’s so different.

“Like I said earlier, even for outfield players it’s hard to replicate what it’s like to be out on the field and actually training. I know the Carlisle lads have been back for a couple of weeks now, but I don’t see that as a problem. It’s just a case of settling in, getting on with it and playing with a smile on your face.

“It’s great to meet new people and Steve [Collis] is someone I haven’t worked with before. You always learn, wherever you go, and even though I’m 30 I still see myself as a 21-year-old. My approach is that I just absorb as much as I can and make sure I keep learning.”

“The thing is, I still feel like I’ve got something to prove,” he commented. “I don’t feel like I’ve had the best of careers, but I’ve worked my way up and a big thing for me is that I’ve always wanted to play in the Football League.

“To do it at a club like this, I feel privileged and I can’t wait to get on with it. It’s a new challenge and no matter what you’re good at you just want to get better. You’re never a finished article and I’m here because I’m willing to do my best to do well for this club.

“I’m here with Magnus [Norman] and he’s another good keeper. Competition is healthy and that’s good for all of the keepers, because it brings the best out of them. I’m sure we’re going to enjoy working with each other to do that.”

Having started his career in non-league, with Blyth Spartans and Gateshead, before moving to Lincoln, where he really set down his markers, he spoke fondly of the experiences that have helped to shape him.

“The way I came through is like a lot of players,” he said. “Nobody really sees what goes on behind closed doors, the hours you put in and what you go through mentally at times.

“It’s just the way it is for some people, you don’t get the rub of the green sometimes when you’re a young lad and you just have to keep going and keep believing. They always say that if you keep working hard you’ll get the reward at some point.

“It was a dream I never gave up on. I promised my grandad that he would be able to watch me in the Football League one day and I’m just pleased that I managed to do that.

“The clubs I played for all taught me something. At the time it’s hard to take it all in, it’s like it’s passing you by, and things do happen so quickly. It’s just great to have been able to have been part of such good teams because it helps you further on in your career.

“The experiences you have mean you can help younger lads as you move on as well. Six years at Lincoln is a good example because there were so many ups and downs there. The message for me through all of my time there was to work hard, and the rewards did come in the end.

“It was a great place for me, I lived there and made a life for myself there with my missus and my little girl. It was a fantastic experience for me to be able to play for that club.

“We had the promotion and the FA Cup run while I was there, and this is why you play the game. You want success and nights like that. When you’re on a cup run, under the lights at a hostile place and you get the smash and grab, there really is no better feeling. Hopefully that’s what it’s going to be for us this year.”

Having said that he didn’t feel his career had quite gone to plan, we challenged him on that when we reminded him that he already has 300 plus appearances to his name.

“Yes, of course, that’s right, but I think you always strive and want more, don’t you?” he replied. “When it’s part of your life, in any job in life, you always want to be at the top.

“You always want your hard work to be rewarded. I’ve said it many times before that where I’ve been and what I’ve come through with injuries, or not playing, I still wouldn’t change any of it, because it’s made me who I am.

“At Stevenage last year, that was tough, but it’s another example of learning about a hard situation. It’s horrible when you’re losing games, it’s just really hard. When every week you’re trying to turn a corner and the luck just doesn’t come, it does test you.

“I know anyone can say it but we worked incredibly hard, but it never seemed to go our way. We were better than the results, but there’s only so much you can say that. I really enjoyed it there and after the year I had at Lincoln it was a massive chance for me to make a name for myself.

“Hopefully people will think I did my best at Stevenage, but it was very hard for the club and the fans. I’m pleased they’re staying up because that club deserves it. It’ been a crazy year and players I know are still there, and I know some people will feel it’s unjust, but it’s the way it’s happened and I’m delighted for them.”

One surprise to come from the interview was when he revealed that Brunton Park was a stadium he’d never played at, despite being with teams who had come our way.

“I don’t think I have,” he confirmed. “I’ve been on the bench here, during my first year in the league, and I always remember that just behind there [as he points to the area of the Paddock just behind the dug outs] we were getting pelters from the fans.

Click HERE to watch an interview with Paul Farman on iFollow United now.