United were at the Liverpool Academy on Thursday afternoon for their final pre-season friendly, and assistant manager Gav Skelton gave us his reaction to what had been another testing encounter for the Blues. 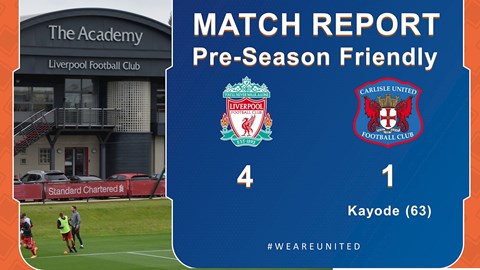 “We can’t dress it up, it was a poor performance, really,” he said. “There were positives in terms of players getting 90 minutes.

"We know there’s always work to do. In pre-season you get some real positives and excellent games and results and performances, and you always get a kick up the backside. Today was one of those.

“We didn’t particularly start well and unfortunately it wasn’t to be our afternoon. Liverpool had some excellent players and they have a good team. They were really good on the ball, how they moved it, but on our side we were disappointed with how we went away from our principles in terms of the things we did well on Tuesday – like hunting in a pack to get the ball both ways, whether in possession, making angles.

“Today we did it as individuals or in twos. It leaves us with a lot to work on, but we won’t get too downbeat. You don’t get carried away when it’s good and you don’t get downbeat when it isn’t.”

“It had the feeling of being a different kind of test,” he agreed. “It was good to get the other lads who haven’t had loads of game time out there, it gives them confidence and psychologically that’s vital for them.

“It’s been a relatively short pre-season but fitness wise I feel we’re in a good place and ready to go.”

With just five days to go to the first competitive fixture of the new season, he told us: “The practice games have gone now. We’ll look forward to Tuesday and we don’t read too much into today.

“Plenty of lads got more minutes, some trained instead of playing 90 minutes, some who hadn’t had as much game time got the chance to get minutes in their legs, which is vital ahead of a busy period.

“We’re very much looking forward to Tuesday, and preparations will really start now for what is an important game. I’m really excited about it, can’t wait. It will be good to get back to competitive football.

“I feel as if we’ve had a good pre-season, performance levels have been good, we dipped a bit today but we move on from that. Overall there are good blocks to build on.”

With stopper Magnus Norman missing from the match day squad again, he explained: “Magnus is seeing a specialist, he has a slight issue with his knee, and we’ll know more about that at the start of next week.

“Paul’s an experienced keeper and he’s shown his qualities and we’re really pleased to have him in the building. Marcus is now back to push him and provide competition, and that’s really good for us and the club.

“Dean Furman warmed up today and we’ll see what happens with him. There were some that started and some that trained, because we’ve had a really tough week. We’ll rest the bodies with a day off on Friday and get back to it on Saturday.

“Everyone will want to be involved on Tuesday. Although for fans it’s not a trophy everybody loves, for us it’s a competitive game after such a long time. There’s nothing like that real edge and I suppose there are points at stake, because it’s a group stage.

“Our focus is fully on that game and on playing well and getting a positive result. We’ll be ready, we’ll be fully focussed, and we’ll be looking to get the season off to a good start.”