Assistant manager Gav Skelton gave us his thoughts on Tuesday afternoon’s away reserve game at Hartlepool shortly after full time on the day. 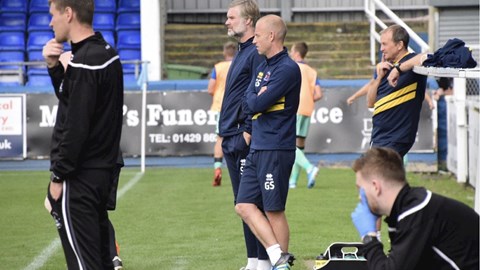 “We’re obviously disappointed with the result, but the important thing is that the players get 90 minutes,” he said. “Most of our team were 21 and under, against a strong Hartlepool side, so it wasn’t ever going to be easy.

“Our young lads have had a lot of plaudits, and rightly so, but this is a wake-up call, and sometimes you need things like this just to let you know where you’re in terms of your development. It’s nice in pre-season, where everybody was great, but this is part of the development and just as important.

“Football is tough, you get knocks and you have to come again, and you hang in there for the type of highs they had early in pre-season. There are no real concerns, our job is to develop these players and make them better so that hopefully they can get into the first team

“When things are great for the young lads it’s pats on the back, but something like this is a wake-up call for us all, including all of the lads who played. When I say the young lads, I mean the whole team, because I think there’s only Louis [Gray] that is over the age of 21, so I’m not downbeat.

“It’s frustrating, and the lads won’t feel it now, because they’re disappointed with how they played, but it’ll be a massive learning curve for the next one.”

“What we have to remember is that the group haven’t trained together, so we don’t have the cohesion or the relationships” he told us. “We got caught on the hop just 10 minutes into the game, and I’m not looking for excuses.

“All of the lads have played football in different formations before, so there really are no excuses. They’ll all be disappointed, so we need to pick them up again, and what I want is to see them all bounce back and get their teeth into everything they’re asked to do.

“Tomorrow is a new day so we need to see that all of them are right at it with the attitude that they know they can do better, so they are going to do better.”

“I have a massive belief that the best way to learn is to come up against good players like this,” he continued. “Training is good, it can be nice, then you come on and get a few minutes here and there, but something like this is tough for the whole group.

“It’s a real test of mentality. Part of being a footballer is having a strength of mentality, because there’s a lot of people with similar ability. It’s the ones who have a strong mentality, who come to a place like this and perform despite the disappointment of not playing for the first team on a Saturday, who will then push on.

“Doing this isn’t a punishment. It’s about helping to make sure the fitness and sharpness is there and it should be used as a learning curve by everyone. It’s also there for the first team members to get a chance to knock at the manager’s door, and some of them haven’t had 90 minutes in their legs for a while.

“Fair play to Hartlepool, I thought they were excellent, especially in the first half, and it was good to get over here and play on their first team pitch. It’s a good relationship for the future because we’re not really in a reserve league and it’s important for us that we can have games like this.”

On what was said to the group after the game, he commented: “They know if they did well or not. Those who are honest with themselves are the ones who will go on and have careers.

“We’ve all done it where we kid ourselves that we were alright and that it’s everybody else to blame. They’re the ones who perhaps won’t go on. It’s now about how those players come back from feeling that they maybe didn’t maximise their potential on the day.

“The thing for me is that you’re playing football. Show enthusiasm, it’s the best job in the world, isn’t it? There’s no punishment in it, you’re getting 90 minutes on a Tuesday afternoon while most of your mates are at work – run about and show some enthusiasm, and enjoy it.”