United boss Steven Pressley gave the press his reaction to the Northampton defeat shortly after full time on Tuesday night. 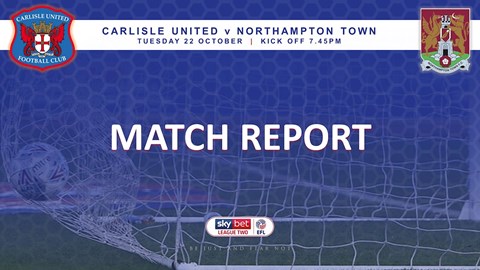 “At this moment in time it’s irrelevant in terms of how I viewed the game because the most important thing is the result,” he said. “We all wanted the positive result, so I don’t think the detail of the game is the important factor.

“I’m disappointed, of course, and I have total understanding and empathy with supporters, because I get their frustration. We are extremely frustrated in here.

On the way forward, he told us: “It was evident again that we need to score from chances created, there’s no doubt about that. We were very comfortable in the game for long periods, but we have to score.

“As I’ve said, I could talk about the game but our supporters really are wanting results, that’s the bottom line and I understand that. Nobody’s hiding from that fact and I accept that responsibility.

And on how the current situation is affecting him personally, he told us: “It’s difficult, of course it is. I work 24/7 here, you know, I don’t see my family, but I’m not looking for sympathy.

“I work every minute of every day to make this club better, and I’ll continue to do that. That’ll not change. I accept the criticism that comes my way, it’s part of the job, I don’t run from that.

“The one thing our supporters need to understand if they want a weak manager, they haven’t got one. They’ve got a manager that is absolutely determined to get through this period.

“I take the criticism. There are no qualms about that. It’s the supporters, they’ve followed this club for many, many years and they want to see success, as I do.

“So, that is the situation, but the one thing I can assure them is I will battle on and I will turn this around.”

“Turning a football club around can take several years,” he added. “I can’t stress enough that this club is in transition, we’ve had to change a lot. People don’t really want to hear me talking about that, and I understand that as well.

“We’re on the back of a defeat and that’s why I don’t really want to go on and on, but it could take years to get this club to where we all want it to be and where it should be.

“The most important thing right now is the short-term and what we can’t do is feel sorry for ourselves. We accept the criticism, and by the way I thought our supporters were good tonight – they were good tonight, make no mistake about that.

“With the disappointment of the results in recent weeks of course you get the reaction at the end, and I really do understand that, but in general they were behind the team.

“I think the team showed a great attitude towards the game but it’s the final moments where we have to be better.

“Look, we’re not blind to the situation we’re in and, as I’ve said, I accept the criticism that comes my way. There’s a manager here who is determined to make this club into what our fans want it to be and I will continue to work hard to achieve it.”

On teenager Jarrad Branthwaite picking up the man-of-the-match award, he commented: “he makes me very proud and that’s what gets you up in the morning, that’s the truth.

“He’s a great kid and we’ve worked really hard with him. Anybody will tell you that the first time I laid eyes on him I was really excited by him.

“He’s been exceptional in the two games, but like every young lad he has to keep his feet on the ground and keep improving. I want him to be a big part of what we create here.”