First team coach Nathan Rooney gave us his reaction to the Central League Cup victory over Morecambe on Tuesday afternoon. 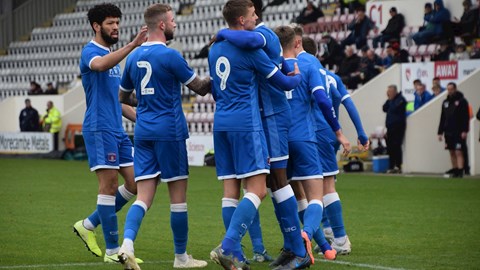 “We know what reserve team football’s about, sometimes it’s about minutes, or an opportunity,” he said. “We said to the boys go and maximise the opportunity today and get yourselves in the plans.

“The boys who haven’t been playing a lot recently, I know the game was a bit flat after 60 minutes, but attitude-wise the majority were there today and that’s all you can ask of these lads in these games.

“There was a good tempo and  everybody stepped on the pitch in the right manner. You know what it’s like when things aren’t in a good place, the lads have to do it for themselves. If they’re maximising their opportunities, nobody can ask any more of them.”

Star man for United was defender Aaron Hayden who combined solid defensive duties with a brace of goals on the day.

“He’s a big strong boy, isn’t he?” he commented. “You can’t take that away from him. We scored off set-plays as well!

“He’s a great lad. I think Aaron plays football the way he lives his life, he’s humble, a strong boy who gets out there and works day in, day out. The afternoon sessions aren’t a problem to him, he’s maximising his opportunity. He’s just got to continue to do that and grow within himself.

“We were pushing other lads on within the game as well. We’ve got a lot of young players, not just in the youth set-up, but the loans as well. Sometimes they need a bit of a kick.

“I do play the game for the lads from the touchline a lot of the time. Elias [Sorensen] had two chances in the first half which [when you miss them] you’re bound to drop in your effort levels at times, but he’s got through it and got his reward – so well done to him.”

Another positive from the afternoon was 60 minutes for midfielder Stefan Scougall, who got his name on the scoresheet courtesy of a stunning first half finish.

“It was brilliant to see him back out there,” he said. “He was dribbling, driving, getting past players. It’s been a long road for him but let’s hope we can actually push on for the second part of the season and players like him can help us get over the line.

“We’ll have to see how he is this week now and even though we want him involved sometimes you can’t overrule the medical side. Hopefully that can be preparation for him to put himself in the picture for the weekend.

“He definitely could be in contention and playing the 60 minutes is what we do. You don’t really ever want to push any player, whether it’s Scougall, or a youth team player, or anyone out there, they’d still get the same amount of time. He’ll be in training on Thursday and it’s up to him now to put himself in contention.” 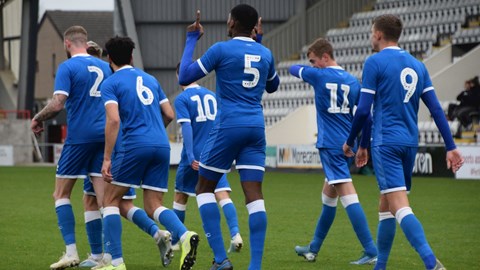 GALLERY: Images from the Central League Cup game against Morecambe

With so many of the players putting in good performances he admitted that there was plenty of food for thought ahead of the Cambridge home game.

“They’ve got to catch the eye week in week out, it can’t just be now and again. Aaron [Hayden] has caught the eye with his enthusiasm, his energy and his love for the game. He’s a big centre-half, perfect for our division, let’s see if that’s going to be required.

“Myself and Gav [Skelton] have just been talking in the corridor for the last few minutes, always plugging ideas, that’s what we’ve both got to do. We’ll challenge each other, make sure we get the team out at the weekend that will roll their sleeves up and look to get the job done.

“The good thing is that there were players out there today who will make that decision a bit harder for us.”