New arrival Christie Elliott joined United on a one-year deal this week and we spoke to the experienced defender about the move shortly after he'd completed the contract formalities. 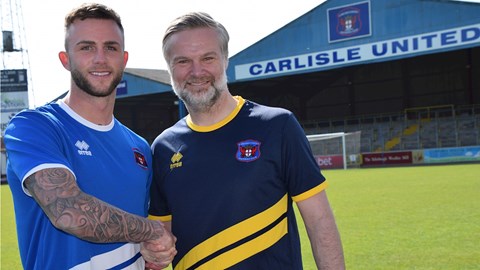 “My contract was coming to an end at Partick, I’ve been there eight years now and I was offered a new contract there, but I just felt like a change was needed," he told us. "Thankfully Carlisle showed a lot of interest and when I came down and looked at the facilities I knew straight away that it was where I wanted to be. It’s a new challenge at a big club and it ticked all the boxes for me, so I was happy to get the opportunity to come here.

“Glasgow became my second home, I’ve been there since I was 19, so to leave there and the club was a hard decision. I got offered another contract, which would have put me into my testimonial year, so it is a sad time to leave. I felt like it was a massive opportunity for me to come here and hopefully get a good shot at English football and do well for the club."

Looking back at his path to Brunton Park, he explained: "I started playing football for England Schoolboys when I was 16 and I then went on to play semi-pro.

"I got a trial up at Partick when I was 19. Jackie McNamara was the manager who signed me and from there I’ve just kept signing new contracts throughout. My first two seasons with them were in the Scottish Championship and we won the league the second year.

"We spent five years in the Premiership, then last season in the Championship, so it’s been a good time. Every year has been enjoyable, but at the stage of my career I’m at I just felt like I needed a new challenge.

“During my early years at Patrick, while I was still young, I had a loan spell at Albion. I was still learning about first team football and it was a good experience, even though I was only there for a short space of time.

"I learned a lot, it was a different division, but I came back a different player. It’s a club I’ll always remember in terms of how they developed me and what I learned from my time there."

“My time at Partick has been brilliant," he continued. "The standard in the SPL is really good and you obviously play against the likes of Rangers, Celtic, Aberdeen and Hearts, who are all big clubs.

"All games are really hard in that league; we finished in the top six one year which was a brilliant achievement. I think a lot of people who come to Scotland don’t realise how good the quality is. Partick is a brilliant club and I hope they do well and get back to where they belong.

“I actually played with some ex-Carlisle players during my time up there. David [Amoo] was a really good player on his day, and he’s done well wherever he’s been. Prince [Buaben] is the same, he’s had a good career and he went back to Hearts after his time at Partick.

"I think they both got a shock in terms of how good the standard of football is in Scotland, and they’ve both had very good things to say about this club."

Having picked up the tag of being 'versatile' we wondered where he felt most comfortable when plying his trade out on the pitch.

“I think throughout my career I’ve probably played every position, apart from goalkeeper, but I think I'd have to say that my best position is as a right back.

"Hopefully I can have a good season in that position and show how good I am. I think my biggest strength is going forward with the ball, and I’ve got a good engine to be able to get up and down the pitch.

"There are a few things I’ll bring, and a few things I know we can develop, but that’s the same with any player. I’m looking forward to getting up and running here, and hopefully doing well for the club.

“I’ve got a lot of experience so hopefully that will help me as well. I don’t know any of my new team mates but I think that’s a good thing. I’ve got a good personality and I want to make new friends, so it’s something I’m really looking forward to.

"When you go into a new club everyone wants to make new friends and make each other feel welcome. I’m looking forward to meeting everyone for pre-season, and I think a big part of having a successful team is that you have a good group of people in the dressing room."

And on the prospect of working with manager Steven Pressley, he said: "I’ve heard a lot of good things about the gaffer up in Scotland.

"Every time I’ve mentioned that I was coming here to anyone everyone was buzzing that he’s the gaffer. He was a big reason why I signed. I spoke to him last week when I came to have a look around and the things he said about the way he wants to play and his plans for the club really impressed me.

“He's massively ambitious, which I like. I want to be kept on my toes every day and I'll always be hungry to do well. As soon as I left the first meeting with him I just wanted to hear more about what his plans for next season are, even though I’d only come to have a look around initially. Everything he had to say and his enthusiasm about the club ticked all the boxes for me.

“The gaffer and David Holdsworth are very ambitious and I’ve looked at the results from the last couple of season, and how well the club wants to do. Hopefully we can build a good squad this year and get into the play-offs, if not automatic promotion."

"This is a massive opportunity for me to show how good I am, and it’s a totally different league and set up. I’m looking forward to the change and I’m sure I’ll do well.

“It’s a big summer for me because I’m also getting married in a couple of weeks! Being out of contract with that coming up has always been in the back of my mind, so it’s good to get it all sorted so quickly.

"Like I said, as soon as I came and had a look around I just wanted to sign, so I’m really happy it’s all happened. My missus was stressing me out and she told me I couldn’t be on the phone every day when we’re on holiday, so it’s good to get it all sorted.

"It’s football, there are that many players out of contract now, but thankfully I’ve been lucky enough to get this deal done early doors.

“The gaffer actually asked me to cancel the stag do and honeymoon but I’d get in some serious trouble! I always keep myself ticking over anyway and I’ll make sure I’m ready for pre-season. I’m always in the gym and stuff so I’ll be fit come the first few weeks and we'll push on from there.”

Click HERE to watch an interview with Christie Elliott on iFollow United now.