United boss Steven Pressley confirmed this evening that he is ‘delighted’ that midfielder Mike Jones has extended his stay with the club as he continues to work hard on recruiting the players he needs ahead of the return to pre-season at the end of this month. 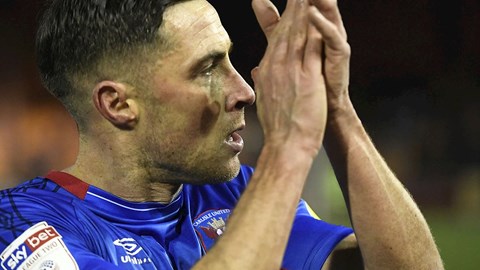 The 31-year-old verbally agreed his new deal with the club on Thursday, taking him into a fourth season at Brunton Park, and will formalise the matter when he completes the paperwork on his return to Carlisle.

“I’ve spoken a lot about the fact that I’m looking for a young, energetic side but, having said that, there are several key areas within the team where you do need experience and some knowhow,” the manager said. “Mike Jones certainly gives us that and he’s a player who can help both defensively and going forward in the area of the field where he does his best work.

“The other thing I’ve spoken about during this period of recruitment is that we’re looking closely at the character of each player.

“I know you only truly find out about a person in that way once you’ve seen them go through certain situations and, in my initial period at the club, Mike stood out for me in terms of the way he went about his strength and conditioning and with how he continued to apply himself during training, even when he wasn’t playing.”

“Those were important reasons why I looked to retain him,” he told us. “Once he got into the team his performances spoke for themselves. He was outstanding for us.

“He showed me that he can play in the way I want the team to play, and that’s also very important for me. But, like I say, it wasn’t just his football ability that shaped my decision, it was the way he conducts himself in every aspect of how he is.

“He’s one of those players who is just a very good person and extremely professional. As we keep repeating, we want to create a certain culture within the football club and that’s based around players showing the kind of attitude that comes naturally to Mike.

“It’s senior players like him who can drive that ethos by leading by example, and I know that’s something he’ll do. I’m delighted that he’s staying with us.”

“I’ve been talking to him quite a lot while he’s been on his holiday with his little boy and one of the first things he said to me was that he wanted to complete unfinished business,” he continued. “I loved hearing that because I can tell that it doesn’t sit right with him that he hasn’t managed to take the step up to the next division with this club.

“He’s quite clearly enjoying himself here with Carlisle, but it’s definitely in the back of his mind that he wants to be part of the club when it does get promoted. He wants to be successful with us and that’s a great message for a manager to receive from any player.”


United boss Chris Beech gave us his reaction to the narrow away defeat at Scunthorpe shortly after full time on Saturday afternoon.

MANAGER: A different kind of game


United head to Scunthorpe tomorrow afternoon as they look to build on their home victory over Southend in what is always a difficult fixture.


United boss Chris Beech gave us his reaction to the narrow away defeat at Scunthorpe shortly after full time on Saturday afternoon.


Carlisle United Football Club and CUOSC have joined up as part of the Carlisle Reunited campaign to put your Face In The Crowd.

MANAGER: A different kind of game


United head to Scunthorpe tomorrow afternoon as they look to build on their home victory over Southend in what is always a difficult fixture.