United boss Steven Pressley confirmed today that he is still prepared to play the waiting game as he continues to work hard to add new faces to the squad.

“We know we’ve still got a lot of work to do in terms of bringing players in,” he said. “I want the players in, but at the moment all we can do is badger the clubs we’re trying to get the players from.

“We believe that these clubs do want their players to come to us. We’ve had good discussions with them and they think this is a good move for their players. The reality is that we still need them to do the business they need to do before we get the players, but I hope in the coming week we’ll have some good news.”

“On one of our midfield targets, it doesn’t look like it’s going to happen, which is disappointing,” he added. “We’ve moved on from that and the good thing is that we had some fall backs.

“We’re making progress, and some of the clubs that we’re chasing players from are starting to do things in the transfer market themselves, which will hopefully mean we get our targets. Hopefully we’ll hear some form of news in the next couple of days, even though it might be news that we have to be a little bit more patient.

“I don’t think we’ll have anyone new in before the trip to Ross County but, like I say, I’m comfortable with that. The addition of Nathan [Thomas] to the group has lifted everybody, and we’ll get that again when more new faces do come in.”

Having added winger Nathan Thomas to the mix, he confirmed that he still wants to add more striking options, preferably well ahead of the game against Crawley.

“I still think we need to bring in three strikers,” he told us. “And when I say strikers, I mean forwards who play centrally, but with the ability to play just off the left or right-hand side and just behind the front line as well.

“I must stress, and I’ve said this a few times, that we aren’t a club who can compete financially with many of the teams in this league, particularly when it comes to the striking position, but that doesn’t mean we can’t compete in the football sense.

“We just have to do it in a different way, and one of those ways is for us to rely on very good loans. I accept that there will be anxiety amongst the fans because they don’t have their full squad here, but I’ve said all along that as a club we have to do things in a slightly different way here. That’s why we sometimes need to be patient.”

“When we look at numbers of players we’re after, we can only really bring in five loans, and Nathan Thomas is one of those,” he commented. “That means it looks like one of the midfield players we bring in will have to be permanent, but it’s a situation we’re constantly assessing. 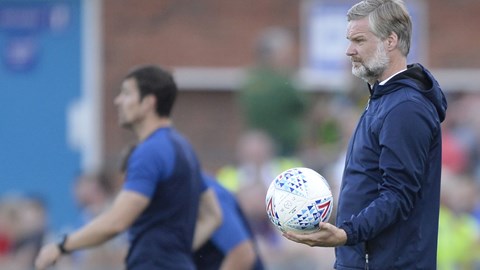 MANAGER: The response from the players is fantastic

“Ideally I would like another three in the building before the Crawley game. If I can get that then I’ll be satisfied going into that fixture.”

Meanwhile the recent run of friendly fixtures has seen an opportunity for many of the current under-18 squad to get some valuable pitch time in front of the first team staff.

“Hopefully over the coming months and years we can help to nurture them because I think it’s really important for a club like ours that we do that.

“Experiences like this are the making of young players, because you’re exposing them to real football at an early age. We talk about players being young at 21 and 22 now, but the reality is that some of the best players in the world have been playing from the age of 17.

“It’s great to give them exposure and they’ll grow because of it. It’s testament to Eric Kinder and the work done by the rest of the academy that these boys are able to fit in with what we need them to do.”