First-year professional Josh Dixon was dealt a huge blow on Tuesday afternoon when it was confirmed that he had suffered an anterior cruciate ligament injury, having been ruled out for most of last season with a similar condition. 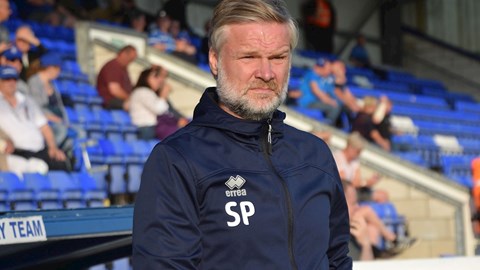 MANAGER: It was a brilliant exercise for us

Dixon, 18, had been impressing manager Steven Pressley in training, both at the end of last season and through the summer, which led to a contract extension for the young midfielder just under a week ago.

Speaking about the injury, the United boss said: “We’re devastated for the kid, and I’m devastated as well, as his manager.

“I was really looking forward to working with that young player because he’s worked ever so hard and he was making a real impression on us. I think we’ve got a real talent on our hands, but he’ll just have to show the mentality he did in the previous year to knuckle down, focus and recover properly.”

“There are a number of players who have had similar situations, and they’ve come through it,” he continued. “I know Callum Wilson, an ex-player of mine, and he sent the young man a video message wishing him the best of luck and giving him encouragement.

“He’s a player who has been through this exact same thing and he’s come back and he’s scoring goals in the Premier League and leading the line for England. We’ll give him every support possible, but we’re obviously devastated for the kid.”

The injury happened during training last week, just hours before Josh and his parents were due to sign his new contract offer.

“Credit to David [Holdsworth] because he was adamant that we would continue that, even though we didn’t know the extent of the injury at that time,” the gaffer explained. “It’s great for the club that they’ve done that, it puts Josh’s mind at ease, and it allows him to really focus on getting himself back and ready for next season.

“It’s all really difficult for him to take and he’ll be in a dark place at this moment in time but, and as I’ve said, the club will give him every support and I’m sure we’ll see a terrific young player when comes back.”

Another absentee from the team sheet on Tuesday night was defender Jack Iredale, who watched the game from the stands.

“Jack has been feeling a little bit of tightness in his thigh,” the Carlisle boss told us. “It’s one of those injuries we don’t want to risk.

“He felt it last week, he came back from it, but he was still feeling it a little bit on Monday. It’ll probably be another five or six days before he’s back in competitive training again. That probably means he’s realistically targeting the Ross County game.

“We won’t push him before that because we don’t want to take any risks. These injuries can be one week of rest, or if you push them you can be out for six weeks, so we’re going to be careful in that respect.”