Caretaker boss Tommy Wright gave us his reaction to the home win against Mansfield Town which took the team to six wins a run – the first time that has been achieved by the club since 2008. 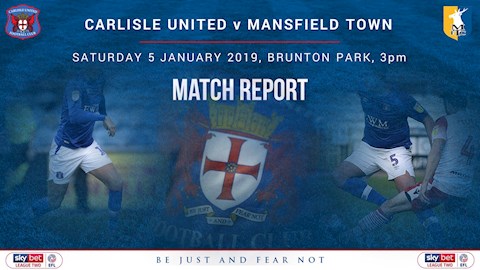 “We’re disappointed with the goals we conceded but I thought some of the football we played was terrific,” he said. “The three goals were fantastic team goals, and we’re pleased with the performance because Mansfield are a good side who were unbeaten in 17. We’re delighted.

“We had a plan, and I spoke to a couple of the players before the game about us sitting in a bit and trying to get on the counter-attack. I think we’re a very good counter-attacking team, which we showed against Oldham when we scored six.

“We had a game plan which worked well. I thought the two centre halves did really well in the first half, they dealt with a lot of crosses and were first to every ball. Like I say, we scored two great goals on the counter, which is pleasing.”

On the devastating manner of the attacking football the team is playing at the moment, he said: “We’re attacking at pace and keeping control of the ball, with Jamie Devitt right at the heart of it. Danny Grainger has done well in that position on the left as well, particularly with his quality in the last third.

“We played some great stuff in the first half, but I thought the two centre halves were very good, so I’m very pleased. Adam [Collin] did well with crosses in the first half as well, and his decision making was fantastic.

“I thought we could have counter-attacked more from Adam, but I’ll watch the game back and have a look at that. We sat on our heels a bit when he got the ball in his hands, and I want us to get out and forward much more from that kind of situation.” 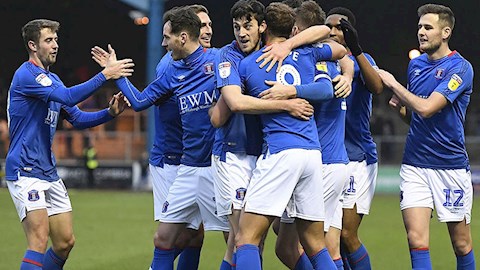 With goals of real quality proving to be the difference between the sides on the day, he commented: “The first two goals were all about team work and people having vision. There was a lot of unselfishness and Hallam [Hope] was in the right position to put it in the back of the net for the second.

“Sowerby keeps popping them in at the moment, so we’re very pleased. All three goals were good goals which probably belong at a higher level, to be honest. If you saw those goals in the Premier League people would be saying they were great goals.

“We’ve got quality here, we just need to keep producing what we’re doing at the moment and believe in themselves, because they’re good players.”

“I was disappointed with the goals we conceded because I thought it let them back in a little bit, and a time when we were totally in control,” he admitted. “I don’t think some of the fans were happy when we were passing it square and backwards, but it’s been a hectic period and I wanted them to save a bit of energy, if they could.

“The big thing about this weekend was that we’ve een on a great run and we wanted to keep it going. We’ve been scoring quality goals, we’ve been playing with a bit of style, and that’s what’s been impressing me most.

“Yes, you want to score from set pieces and things like that, but we’ve scored some great team and individual goals. In this game it came down to teamwork and players being unselfish.”

Despite what could have been an unsettling 24-hours, he also spoke about how pleased he was with the reaction from the group.

“I’ve been encouraging the lads all the time to believe in what they can do,” he explained. “The most important thing for all of them is to make sure they take care of the ball.

“That little yellow and white thing they kick around out there can make them millionaires, or it can put them on the dole.

“Love it [the ball]. Love it as much as you love your girlfriend or your wife, because it’s your life. The best teams in the world don’t do silly things, they don’t give it away, they keep it. They concentrate on the little things, and it’s the little things that made the difference for us today.

“That’s why I was disappointed with the two goals we conceded, because they were basically high balls into the box that we should have dealt with.

“But, like I say, we’re beating good teams in a good way and the fans are enjoying it as well. That’s credit to the players, and if they can keep the consistency going, they’ll be in a great place.”