New United boss Steven Pressley somehow evaded prying eyes at the PTS Stadium last weekend as he took in the Northampton game first hand, having made the final shortlist for the then vacant managerial post.

The opportunity to watch the team allowed him to see his new charges first hand as they enjoyed the better of the first half, only to succumb to three killer finishes after the break.

Speaking about the game, he said: “At half time I thought there was only going to be one winner. In the final 20 minutes of the first half we really grew into the game and we looked a real threat on the counter-attack.

“The one thing about Carlisle at this moment in time is that we have defenders who can stand up to the game, which is very important in League Two. We’ve got two good, strong centre backs who understand the league and they both do the basics very well.

“I think it’s really important at this level to have players like that. There’s the nucleus of a very good team here and I know they are more than capable of competing in this league.

“I’m very aware that we need to bring in personnel to help the current squad for the final push. The good thing for me is that this isn’t a broken situation. Of course, any new manager wants certain changes, but there’s no need at all to do too much of that here.

“The work already done is excellent and continuity is very important. I’ll get that with help from Tommy and Paul and I know we’re all going to enjoy working together. I can’t wait to get my teeth into it.”

With the clock ticking on the January transfer window, he added: “I know there are players who have returned to their parent clubs due to their loan deals expiring, so there are reinforcements required, but we really do have the nucleus of a very strong team here.

“There’s definitely work to do in the transfer market and we’ll be working 24/7 to ensure we get the right players in. I’ll speak to the current staff about that, and about their feelings on the squad.

“I have my own ideas, but I think it’s very important to speak to Tommy and Paul because they’ve been working with the lads on a daily basis. Their input will be vital. Hopefully we can make sure we get the right players in to complement the ones we’ve already got.

“I’ve spoken to David [Holdsworth] about the transfer window, but not in any great depth yet. We’ve talked about the areas we may need to recruit in, and I’ll obviously work closely with him to ensure we get the players we want. I don’t know if we’ll have players in before Saturday, we’ll certainly work towards that, but we can’t guarantee anything.”

“The board have said they will back me as much as they can,” he confirmed. “Like every club there are financial restraints, so you have to work within your means.

“Every penny they can make towards gaining results on the pitch is going to be used, so we hope we can get the personnel in who will help us over the next couple of weeks. David has obviously been working hard at that for a number of months now.

“I’ve worked with a director of football at Falkirk, at Fleetwood and at Pafos, so this is the fourth time I’ve had that kind of situation. I’m very comfortable with myself and how I do things, so I think it will work well. He’s here to help and we’ve already sparked up a good relationship.”

With Fleetwood loan players Ashley Nadesan [already returned to his parent club] and Jack Sowerby [due to return at the end of the month] still major points for discussion, he spoke about the ongoing talks with Joey Barton and his staff about the pair.

“I don’t know where we’ll be at the end of the window with Nadesan and Sowerby,” he commented. “The noises coming out of Fleetwood at this moment in time are that both players will play a part for them for the remainder of the season.

“It’s something we’ll continue speaking to them about because both of those players have made a really good impact at this football club, so it would be disappointing to lose them, and we’ll be doing our best to keep them here.

“I wasn’t responsible for the signing of Ashley but he did come in while I was at Fleetwood. I only worked with him for a short period of time because I left a week or so before the first game of the season.

“I did my pre-season with him, and he’s a really good kid who has made a really big impression here. He came from non-league at that time and his goal scoring record was terrific.

“I can see from the footage I’ve watched that he’s filled out considerably since I worked with him. He came in and he was a young player who was only training twice a week. He was very thin in his appearance, but you can see that day-to-day football has certainly helped him physically.”

And the other relatively unresolved issue is that of forward Jerry yates, who came off the bench to play for Rotherham last weekend.

“Jerry is another player who has made a significant contribution here, and he’s another who we’ll be doing everything we can to bring back to the football club,” he confirmed. “From what I’ve heard he really enjoyed it here and we play a style of football that suits him.

“There’s still talking to be done and ultimately we know that it comes down to what Paul Warne and Rotherham feel is best for him and for their club.” 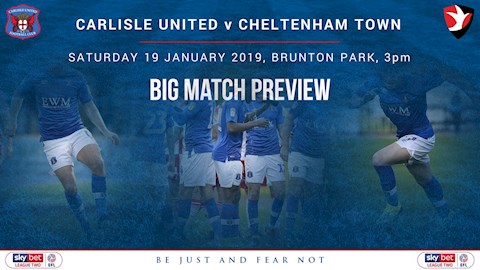 BIG MATCH PREVIEW: A look ahead to the visit of Cheltenham

As for what type of football he wants to instil at the club, he told us: “Anybody who has worked with me will know that I love to play pure, fast football.

“I like a high pressing game, but I also have to assess how we’ve played before. I’m very conscious of that. If there are one or two tweaks which will improve the team, I’ll certainly implement them, but there are a lot of good things in place here.

“I’m not here to deflect anything and I understand what the expectations are. I want to be part of all of that. Coming to a club where’s there a serious opportunity for promotion is very exciting, and that’s exactly what we have here.

“I hope I can bring the type of leadership which they will all buy into. I understand the mindset of players and I try to relate that to everything I do, whether it’s organising training or getting ready for games. I want the players getting out of bed in the morning and feeling excited about what they’re coming in to.

“I’ll always treat the players like adults but, as we know, relationships are reciprocal, and I expect that back. There has to be a degree of trust and the players have to understand the values of being a football player. All of these things are very important to me.

“This group, from what I’ve seen, has the qualities I like. If there are changes they won’t be drastic, because it just isn’t needed.”