United take their current unbeaten run to Northampton at the weekend looking to move it one step further and equal a record set back in 2006 when the club was also riding high in League Two.

Speaking about the excellent run, joint caretaker manager Paul Murray said: “Things are going really well so it’s a great time to be involved at the club.

“The team were playing well anyway, so myself and Tommy [Wright] have just continued doing things the same way since Shez left. Basically there’s a feel-good factor around the place, from top to bottom, from Bill in the car park to the directors. Everyone is just happy and buzzing at the moment.”

“Obviously there are little things we’ll change, but the fact is that everything has been going well,” he continued. “There’s nothing major needed, just a couple of little tweaks, because the lads have performed magnificently.

“A lot of it is down to them because we only give them certain things to look at. It’s up to them to go out and do it. The response was brilliant from them for the Mansfield game.

“When we took the meeting before the game we spoke about how they were 17 unbeaten and how they’d only lost one away from home. But we were the form team and we kept that up on Saturday.

“It was a fantastic win with some excellent goals and some brilliant passing and movement. I think it was good for everybody to see us play like that and it kept things on a high.”

“All we’re doing is continuing the good work that’s been done,” he continued. “I actually thought the lads went to a new level football wise on Saturday.

“The way they played was really good to see. They’re strutting around with their chests out, so the job is so simple for us at the moment. We just need to prepare them to keep doing it.

“Coaching a group of players who are full of this much confidence is pretty simple. I’ve been managing and coaching different age groups over the last three years, but they’re all human beings at the end of the day, whatever age they are.

“When they’re in that confident mood it’s pretty easy because you hope they’ll make the right decisions, which is what we saw on Saturday. Some of the football we played was brilliant, so long may that continue. We won’t let them get too cocky, but at the moment we don’t have to give them too much input because they’re all in a good place exactly as they are.”

“We’ll continue to take each game as it comes, which is what we’ve been doing all season,” he commented. “It would be a fantastic feat if we were able to go down to Northampton and make it seven wins on the bounce, which I think equals a club record.

“We put a stop to Mansfield’s unbeaten run and I’m sure that’s what other teams will be trying to do to us now. We want to get to seven wins, it’s good for the club and it would also be good for the players, because I’m not sure how many of them will have won seven games in a row before in their careers.

“Eventually the run will end, no doubt, but if you lose one game you can’t then go on and lose two or three on the bounce. You’ve got to make sure you pick up a result quickly. The lads are in a really good place, the momentum and enthusiasm everyone has got is massive, and we still think there’s a bit more to come.” 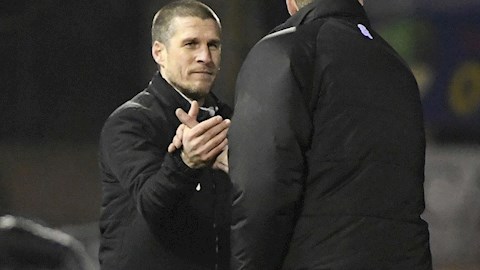 INTERVIEW: It's all about results, and we're on a good run

The arrival of Connor Simpson from Preston on Wednesday confirmed that recruitment is ongoing as the club looks to bolster the squad with some important games to come.

“We sit together with David [Holdsworth] in the office every morning to talk about different things,” he explained. “We’re always talking and speaking about future targets, and we have one through the door, so we’ll see if any more come along.

“Connor was a youngster at Hartlepool who made a few headlines when he was there. When he was with Hartlepool he was one who was mentioned as being a player to look out for within their academy.

“We know a bit about him and, with his height and size, it gives us an option to use him as a bit of a target man. He’s a good addition to the squad. We’re playing good passing football, and long may that continue, but he can fit into that or he can give us that focal point style of approach.”

“Other things are ongoing as well,” he said. “The Nadesan situation is one of them, and it’s a good thing that it’s still alive. It’s the same with Sowerby and Yates, and it would be fantastic if we could keep all of these lads again.

“We know Nadesan will be hard to replace, if he doesn’t come back. It’ll be difficult because the stats prove how important he’s been for us. Towards the end he was in excellent form out on the right. I’m sure whoever gets the opportunity to play at Northampton will give it their all.

“Like I say, Jerry Yates might be back, we don’t know, because that situation is also ongoing. If these lads don’t come back all you can say to whoever does get the opportunity is that they need to take it.”