Director of football David Holdsworth spoke to us about the managerial selection process which culminated on Wednesday morning with the appointment of former Coventry and Fleetwood manager Steven Pressley. 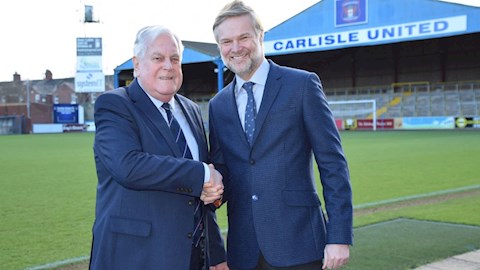 “Following the departure of John [Sheridan] I started to do my due diligence, in terms of personnel and opportunities which we might be able to exploit, and we also opened it up for applicants to get in touch, if they felt they wanted the job,” he said.

“A vast amount of applications came through the door, and there were some excellent individuals amongst them. I went through the process of meeting eight of them, and I also had discussions with agents, and we whittled it down to a second short-list.

“I have to say, we could have been interviewing for a Championship club with the quality of the people who applied. I must thank all of them because they’ve conducted themselves in a really professional way. I’ve had to send some difficult text messages today, because there are people I know, like and respect who wanted to come in and do the job.

“We’ve had to take a step back and carry this process through diligently and carefully, and we’ve made what we think is a good appointment. Hopefully that proves to be the case and it will go from the short-term to the long-term.”

“Having got down to the final candidates the board unanimously opted for Steven,” he confirmed. “The way he talked really impressed everybody, and he’s a young manager who has actually built up a vast amount of experience.

“Importantly he’s a leader, and we’re hoping that will help the players. He was captain at nearly every club he played for and I like that type of leadership commodity. He’ll bring a different type of style to the job and I think the players will be very appreciative of the way he’ll address them.”

On the reason for the short-term deal, he explained: “We didn’t want to think about giving someone a three-year contract at this stage only to then have to rip it up and put ourselves in a financial situation further down the line.

“We’ve said this before, people now have to buy into us and the way we work. This is the way we’re going. There isn’t a need any longer to worry about whether or not somebody will come to us. It’s changed dramatically, it’s now about the person being right for us.

“Steven has bought into our process and how we work, and that’s the way we’ve got to go with such important appointments. I think it’s also important for our fans to know that we’re doing things properly and we won’t be throwing contracts around for the sake of it.”

Speaking about the remit handed to the new manager ahead of taking up his new post, he commented: “Steven knows we have 54 points to play for and that if he wins nine of those games we won’t be far away.

“That’s an average of 1.5 points needed per game to virtually guarantee a place in the play-offs. If we do better than that, and other teams tail off, then it will be a very exciting end to the season.

“With all of that in mind, we still didn’t feel the need to rush the process. The more important thing for us was to get the right person. If it hadn’t been right, I wouldn’t have appointed anybody.

“We met with four final candidates and they were all absolutely spot on. The pleasing thing for us was that Steven stood out. He’s looking forward to working with Tommy [Wright] and Paul [Murray] and the biggest compliment I can pay them is that I could have changed the whole structure, but I didn’t want to.

“I want them to remain in place because they’re doing a superb job for this club. I informed them yesterday about Steven’s appointment and we all hope that they do stay with us. Steven will be in touch with them and I’m sure they’ll work well together as a team.

“Having spoken to him he’s looking forward to being here. He’ll become part of Carlisle, and I’m sure everyone will see him wandering around the place. I think the fans will enjoy talking to him because he’s very charismatic and approachable.”

With just a fortnight of the transfer window left to go, and with a game just 48 hours away, it’s very much a case of hitting the ground running for the new gaffer as he meets his group for the first time this morning.

“It’s a busy time but it’s a great way for him to get started, in my opinion,” he said. “There can’t be wholesale changes, and we’re two or three players down from where we were.

“He watched the game on Saturday and he saw that if we’d scored first we’d have probably gone on to win it. We didn’t take our chances, so that didn’t happen. He won’t change too much because he doesn’t need to.

“He’ll talk to Tommy and Paul and if we can bring in a number of players before the transfer window shuts, and if we can bring back one, if not two, we’ll be in a far better place going into the last 16 games. There’s no immediate rush but I have identified two or three players, and I’ve spoken to Steven about them this morning.

“There are negotiations I need to have over the next few days to put Steven in a position where he can take up those options, if he wants to. With Jerry [Yates], I think the people at Rotherham have blocked my number with me ringing them so much. He wants to be here, we want him here, but if they are going to use him we’ll just have to find another option.”

“Look, we know this has been a difficult time for the fans,” he concluded. “What we’ve shown is that we’re all working hard together at this club and we want the supporters to keep getting behind us in exactly the way they have.

“I think they’ve seen that we’ve been putting a work ethic in place on and off the training ground. All I can ask is that they get behind Steven and keep behind the club because we have a vision for going forward.

“If you’d said to me when I came here in the summer that we’d be in the play-off places going into the transfer window I’d have told you that you’d gone crackers. We’ve done it by working hard and being practical, and the people behind the scenes are doing the same. Steven is here to carry that on.”