United will be looking to get back to winning ways this weekend with new manager Steven Pressley in place as the Robins come to town.

Cheltenham currently sit five points above the drop zone and will be stung by last weekend's defeat at the hands of Tranmere Rovers.

Luke Varney gave the home side the lead just before the break, but Norwood, Miller and Banks struck back in the second half to turn the game on its head and make sure that Rovers took the points home.

The Robins started the new year with an emphatic 4-1 away victory at Yeovil, but two defeats in their last two league games are a reminder that there is still work to do.

The signs are there that better is to come though, with this weekend's visitors unbeaten in league competition all the way through December.

With seven goals to his name, Luke Varney is one to watch out for, as are Tyrone Barnett and Conor Thomas. Barnett has rattled up five goals and four assists, and Thomas has five goals and one assist.

Speaking ahead of the game, new boss Steven Pressley said: "As soon as I found out there was a possibility that I could get the job I started to look closely at our next opponents.

"Cheltenham are under the stewardship of a young manager who likes his side to play football. They're a team that has been difficult to beat and I have no doubt they'll give us a real test.

"They look after the ball and they get at teams, but I know our players are feeling confident after last week's setback. They'll want to put things right here at home this weekend because, as anybody will tell you, you need positive results at your own ground if you're going to achieve anything.

"I'm looking forward to meeting the fans and I know they want success just as much as we do. They'll be behind us and it's up to us to produce the kind of football they can enjoy and that they'll want to keep coming to watch."

+ It was originally thought that the Robins were founded in 1892, but recent research suggests it was actually five years earlier.

+ In 2015 it emerged that supporter Bryan Jacob left Cheltenham’s Supporters’ Club £222,000 in his will - the Supporters’ Player of the Season Award is now named after him.

The sides have met a total of 25 times over the years, with United edging their way in front in the stats stakes thanks to the victory at Whaddon Road earlier this season.

Our last meeting was our second away trip of this season's campaign. The Blues took the lead just before the break, when Richie Bennett swept a nod down from Ashley Nadesan into the back of the net. That proved to be enough in what was an otherwise tight encounter.

Prior to that, we met at the Jonny-Rocks Stadium in March 2018, and the Robins came out of the blocks firing in what was an entertaining game.

The hosts were made to pay for a string of missed chances when Hallam Hope tumbled to the floor inside the box late in the game.

Jamie Devitt kept a cool head before stepping up to smash the spot kick into the waiting net right in front of the travelling fans.

The Blues had made easier work of it earlier in the season when an own goal from Harry Pell – a swipe into the top corner as he tried to clear a loose ball with just five minutes on the clock – was added to by Reggie Lambe and Tom Miller as United ran out as 3-0 winners. 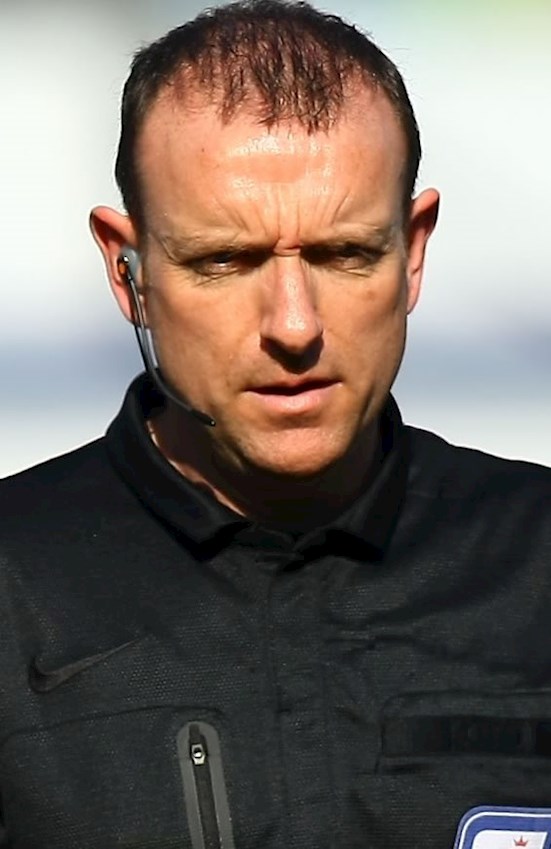 The referee for this game is Mr Carl Boyeson. Carl has taken charge of 25 games so far this season showing 91 yellow cards and three reds.

We last met him just two months ago when he was the man in the middle for our home game against Forest Green. Ben Morris and Carl Winchester had given the visitors a two-goal cushion, but a late Jamie Devitt penalty turned out to be nothing more than a consolation as Rovers claimed their victory. Anthony Gerrard was the only Carlisle name taken on the day.

The tide changed at the start of the second half when O'Nien was sent off, and a penalty from Danny Grainger brought United right back into the game. Jamie Devitt and Cole Stockton turned the game on its head, and the visitors appeared to have secured the three points as the clock ticked in to time added on.