United boss Steven Pressley gave us his reaction to the 1-1 home draw with Exeter City shortly after full time on Saturday afternoon. 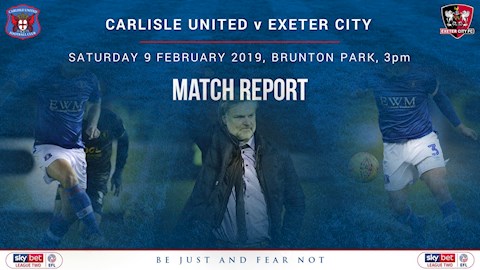 “It was probably the fair result in the end but, to be honest, after 20 minutes we were fortunate to only be 1-0 down,” he said. “We worked on shape lead up to the game but I’ve said to the players time and time again, shape doesn’t stop the goals, it’s how hard and intensely you work within that shape.

“In the opening 20 minutes we were very passive in our shape, we weren’t aggressive in the game, and we allowed them to get their heads up and pick their passes when we should have been in their faces.

“After that, we began to get contact and we grew into the game, but the half time result reflected how the game had gone in my opinion.”

“In the second half I thought we were very good and we played the type of football I want to see us play,” he continued. “There was a real difference in the intensity in the second half, we were intense in the way we pressed and we broke quickly with some really good bits of football.

“In the end it was a fair result between two good teams. You have to give them credit, they’re a very good side. I watched their game against MK Dons last week and they do play the game very well. They’re a very well organised side.

“It was a game between two sides in good form and I thought it was good to watch. It was a game both teams were desperate to win. They knew they could have made a statement if they’d won, and we knew we could really put some distance between us and them if we’d got the victory.”

“I’m disappointed, because I want us to win all our home games,” he commented. “This has to be to be a place where we win our games. The one thing I said to the players was when you don’t win, you make sure you don’t lose, and that was an important factor for us today. We showed a good mentality.

“But I have to say, watching that first 20 minutes was very frustrating because I know they’re better than that and the players know that themselves. We were just a little bit tentative, we showed them a level of respect we didn’t need to, but we reacted positively and I have to commend the players on that.

“When you go 1-0 down at home to a good side like that, it’s not easy, but our reaction was terrific. I was really pleased in the end that we got the point and kept the run going. It’s important we don’t lose these types of games.” 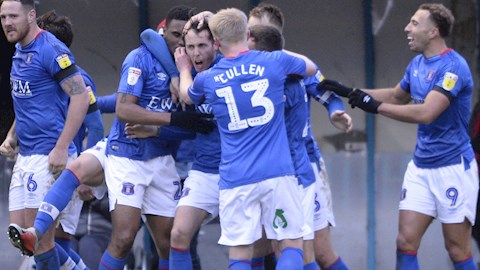 With extremely blustery conditions throughout, he said: “I thought it was a really strong second half performance against the wind.

“The wind was blowing hard but ironically both sides played better against it. We played high energy football in the second half, and that’s the type of performance I expect from us. It was a second half which tells me that we have a real chance.

“Of course, we’re disappointed with the way we conceded the free kick for their goal, but I think the way it was conceded reflected how we’d started the game. I thought we grew into it after that, especially in the second half. I thought the second half was an exciting, positive performance from us. It had the intensity we demand and you could feel the supporters getting right behind us because of it, and that was really pleasing. I think the supporters will go away today feeling pretty optimistic about what they saw, especially in the second half.”

On the stunning late equaliser, he told us: “You could really feel that the goal was coming. We were building the pressure and the opportunities were coming, and I think it was nothing more than we deserved at the time. I felt once we scored in the second half there was really only one team going to get a result.

“I’m really pleased with the response, because that’s a question mark answered by the players. A lot of clubs in the chasing pack had disappointing results today, and it isn’t easy when you’re chasing something. The pressure builds and the supporters are desperate for it. When that happens, maybe what we saw today in the opening 20 minutes can happen. The good thing was that we showed a calmness in the second half.

“Jamie [Devitt] is a game changing player and he showed again why those types of players are so important to teams. At any given time he can change the whole complexion of the game, Jamie is a big moment player and I was delighted for him because it was a big, big goal for us.”

The Blues bounced between fourth and seventh spot in the table through the course of the 90 minutes, finally settling in fifth place following that stunning strike from Devitt.

“It’s a reminder to us all of why winning is so important, because points make such massive difference at this stage of the season,” he said. “One of the strengths of this team is, if you look at the league table, we’ve lost significantly more games than other teams around us, but we’ve won so many games that it keeps us up there, and that’s a great habit.

“There are probably nine teams vying for the promotion places at this moment in time, but our aspiration isn’t just to reach the play-offs, I want to catch the teams above us. That’s why this is a really important week for us.”