We caught up with Stefan Scougall shortly after full-time in the MK Dons game at Brunton Park on Saturday. 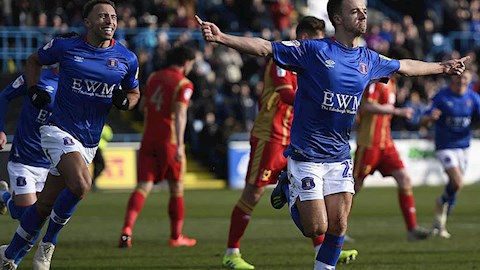 “It was a big opportunity for us on Saturday but in the end we came up short,” he admitted. “It was a good game, and we played particularly well in a large spell of it, but there was a 15 to 20-minute spell in the second half where we couldn’t keep the ball. We gave away possession too easily and ultimately that cost us.

“In the first half especially, we played some good one or two touch football and I felt we deserved to be at least on level terms going into the break. Unfortunately we didn’t come out and start the second half that well.

“I’ve not really played as a false nine or striker much in my career so it was a new experience for me, but I took it in my stride. Thankfully I got a penalty which I was able to take and score.

"When I got taken down I was ready to hopefully put the ball in the back of the net, so I don’t think there were any grey areas about the who was going to take it. It was good play leading up to it with H [Hallam Hope] and young Cal [O’Hare], and I managed to find a bit of space and get a touch to go past the defender."

On stepping forward to take that spot kick, he commented: “That was my first professional penalty so it was nice to see it go in. I’ve taken a few in reserve games and things like that, but not in a first team game. At the end of the day it went in the back of the net which is the important thing.

“The keeper took a step the other way then changed when he saw me take it, but he couldn’t get to it. My heart was in my mouth a little bit, but it went in so it was all good. I’m a confident player so if given a chance I’m happy to step up.

"I think Danny [Grainger] and Dev [Jamie Devitt] both would have been ahead of me but the gaffer asked before the game and I was one of the first to say I would take it. I always back myself with anything, and it was good to get back on the score sheet."

“I thought we started the game quite well but they got in behind us and scored which maybe took a little bit out of us," he commented. "After that we played some good stuff and when we got the goal it gave everyone a big lift. We’ve got a few new boys in the team so it might take a couple of weeks for us to get used to each other, but I think we showed in glimpses today what’s to come.

“That spell after half time proved to be decisive so for us it’s quite gutting. As players we need to take more ownership when we’re on the pitch, there’s only so much the gaffer can say from the side. If you give away the ball cheaply in bad areas then you’re going to get punished." 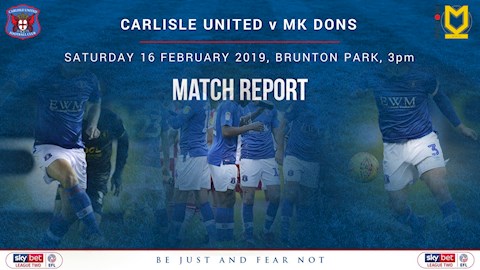 MATCH REPORT: How the Saturday home game panned out

And with the club looking to get back to winning ways in front of the big crowd, he told us: “It’s a tough one to take but we know there’s still another 14 games to go.

"We'll be working hard from Monday to make sure we’re ready for the game at Colchester next Saturday. The boys will all be devastated over the weekend as you’d expect, but when we come back in on Monday we’ll be looking forward to the Colchester game."

Having started his first game in a blue shirt, he said: “That was my first start since the end of July or early August so I definitely felt it towards the end.

"I think a few of the other boys felt it as well because it has been a tough week. We’ve had three games, one of those away with ten men for a long time, so it is tough, but that’s what we’re here to do. We’d all rather be playing games than training, but it does take it out of you.

“It was fantastic to find out I was starting the game. We’ve obviously had a couple of injuries and Dev is suspended, but I was delighted when I got the call. Hopefully I did enough to keep my place next week. Like I said, it’s been a long time since I’ve played so it was great to be back out on the pitch from the start."

Having picked up the man of the match award, he said: “I just like to go out and play my game which hopefully excites the fans and gets them on the edge of their seats.

"Hopefully I did that in spells today, but I think there’s more to come from me. I’m still a bit away from being 100% fit. I’m fit training wise, but as soon as you come to match day it’s a totally different kind of fitness, so I feel like I’m a couple of games away from that.

"I felt good out there for the majority of the game, but I got cramp a couple of times towards the end.

“The fans came out in their numbers today and hopefully in the next few home games we can keep them coming back. As players you always want to play in front of big crowds, and ultimately it’s them who push you over the line. It would be fantastic if they kept coming back.

“There’s still plenty of games to play and plenty of points to play for and it’s still in our hands. We need to make sure we get a result in the next game and take it from there.

"I think there’s pressure on every game, especially when you’re at the top end of the table, but it’s a good pressure and one you’d rather have than being at the bottom of the table. The next game is always the more important one and we go in to every game confident that we can beat anyone."

Click HERE to watch an interview with Stefan Scougall on iFollow United now.