United boss Chris Beech gave us his reaction to the hard-earned away win at the Bescot Stadium on Sunday afternoon. 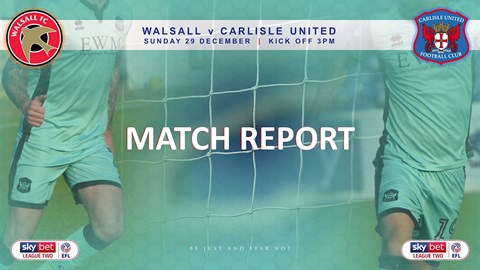 Speaking first about the support behind the goal, he said: “I’ve really appreciated the fans, they’re unbelievable, they were loud. I can only applaud them. Some will still be working, some will be having a break at Christmas time, but they’re coming and supporting their home city.

“I love stuff like that and I’m really pleased with how the seven games have gone in terms of not conceding, building, progressing, scoring; I’m really happy for them and I do appreciate every single person’s support. I was so gutted on Boxing Day we couldn’t deliver the victory.

“Walsall were quiet but it’s because we stagnate opposition. We still have to work on many things but we’re getting better and it’s pleasing to see. I feel like we deserved this victory many games ago in terms of how we’re actually approaching being more competitive.

“But we’re starting to play a bit more football which suits my style as a coach. The players are enjoying doing it and we want to try and build on this.

“We’ve got to try and maximise the squad for our opportunities. It is difficult, with a small squad, but at the same time a couple of lads are fit - Jack Iredale gets his opportunity due to Jarrad’s thigh being sore in training, so you adapt and stick to the plan.”

“Coming here, it’s a really difficult place to come,” he added. “I told the lads that they were going to have to run harder than they ran against Bradford, but I feel not only did they meet Bradford’s demand in terms of physical output, I felt we bettered it. I can only say well done lads for that.

“It will mean a lot to the lads that they got the win. But in football, give me three hours, I draw a straight line under it, it’s Crewe and it’s over. That’s the nature of this business. It’s about the standards of trying to set higher ones, trying to be consistent with them, and then progressing them. That’s all we try and do.”

As for getting his first league victory under his belt, he commented: “It’s excellent, to be sat fourth game leading … I said to Gav [Skelton] that we’d gone over five minutes, we have a chance here.

“But they made good substitutes, giving it to a stand-out winger in the league, Wes McDonald, it was an outstanding shot. It hit he bar, hit the floor, and Gav hit one like that in training yesterday, but that one didn’t go in either! We recovered from that equaliser which is what I’m really pleased with.

“Making it count against the 10-men was important as well. Often it doesn’t happen, they get a corner, stuff like that … but the lads stuck to the task and we do have to improve moving that football, we have to move and pass forwards faster. If you could hear me, I wanted the ball played forwards, not backwards and sideways, it worked today, so I’m happy.”

And on the goal scorers – Harry McKirdy and Nathan Thomas – he said: “Nathan’s been excellent. He could have scored the winner against Bradford but he got on the scoresheet today.

“I thought Lofty did well to make sure the ball went in, he got in the six-yard box, and that’s the work we’ve been doing. It’s part of creating the distractions that I talk about, the goalkeeper can’t just fixate on Nathan, he’s got things and blurs running at him, Carlisle shirts coming at him and the ball ends up in the back of the net.

“Harry, I want him to enjoy the fact he’s scored another header. He tells me it’s his third one, but it’s a really good, brave header, right in front of the lads and lasses from Carlisle, so I’m really pleased for him.

“He’s a very energised lad, very energetic in the changing room, energetic in meetings, he can’t help it. You are who you are, and what you’ve got to make sure you do is utilise that to the best of your benefits, and I’m so pleased Harry’s ended up scoring the winner with his head.

“He’s had a good game. He was a little bit too wide first half and a bit too quick in taking the shot, and that was the same with Nathan. They have great crossing ability, but we worked the ball out to both wingers quite well and they were crossing the ball early. We got to grips with it after 15 minutes and I was really pleased with them.”

“I’ve not looked but I get a tap on the shoulder to tell me that results are good today, and they were,” he told us. “On Boxing Day, a nudge, a point, is so vital. Three is magnificent, but the one’s unbelievable.

“I’m proud of the fact we’ve not conceded in three home games. I had a word with Adam Collin about him not getting the clean sheet, but I’m not too sure anybody could have saved the initial shot, and then it’s heads or tails where it bounces.

“But I’m really pleased with the resilience and consistent behaviours of the players. They’ve been very good since I came in. I know we have to raise standards, no question about that, and I’ve had many meetings with the staff to look at raising that.”