Head coach Chris Beech confirmed on Sunday that a new arrival is close, but not yet fully confirmed, as the January transfer window ticks ever closer.

MATCH PREVIEW: It's off to Crewe on New Years Day

“He’s 99.9 yards down a 100-yard road,” he told us. “He can’t be involved with us until after Crewe, but he was training with us yesterday [Saturday] and I’m really pleased the club have supported that.

“Elias Sorensen has gone back, which frees up an opportunity for me, so I’m taking full advantage of that. The rules and regulations state that because deadline day doesn’t open until Wednesday morning, they’ve got to be registered 24 hours before that game.

“I’m snookered on that, but he has trained with us and I’m happy about that.”

Speaking more about the manner of the weekend win, he commented: “You can beat anybody as long as you’re organised and structured.

“After the equaliser the lads stuck to task and they responded to the setback. They kept going and I knew if we played the way we were playing we’d get two or three good opportunities in the last 10 minutes, and we did it.

“Defensively we were solid and that’s been building for a while now. Webster was magnificent. He was enjoying himself so much. He’s actually having banter with the opposition supporters.

“When we scored it was his turn to give a little bit back, but I just grabbed him by the belly and said listen, don’t get yourself booked. He was getting mad at Lavery who’s a good, small player, and this happens a lot – because he’s smaller, the ref doesn’t deem fouls, whereas Lofty if he uses his body it’s constantly deemed a foul. But he’s doing no worse than Lavery. He got fed up of it and lost his discipline for five seconds, I said stay on task, it’s important.” 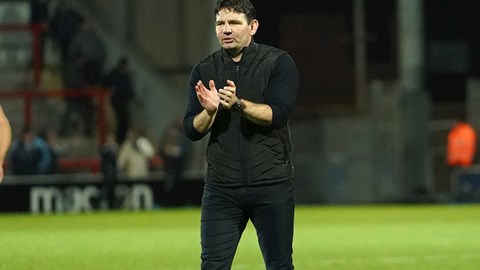 INTERVIEW: I can only applaud the fans

And on the interesting issues surrounding team selection, he told us: “We were without Jarrad, and that was disappointing really. He came with us, we trained at Blackburn on the way down, and Jarrad pulled his thigh a little bit.

“He said he’s had it before as a scholar and it took about a week to clear up, so hopefully it will be fine. You know what these young lads are like. Jarrad wants to play football and sometimes they don’t really know their own bodies.

“Behind the scenes we’ve had Christie Elliott pull out of the squad once I’ve named it yesterday [Saturday], we’ve had illness, I’ve had Scougall telling us he’s available but not quite right because he’s got an ear infection.

“So, they were all big decisions to make on matchday. I pick a team, left it as late as possible today in the hotel, did the team meeting and Walsall prep, then Mike Jones tells me after I’ve done it that he’s struggling, feeling sick from pre-match.

“You’re looking at it and thinking, wow, but you have to try and keep your composure and keep to some sort of plan. We’ll have a plan and it’s adapting at the point to make the plan come through.

“It’s not necessarily a decision I would have made bringing Scougall off at half-time but he couldn’t do any more. I wanted him to try and get through the next 10 minutes of the second half, but he was honest enough to say he can’t do no more, that’s what I want from the players – the honesty and respect they can give the Carlisle fan, and each other as players.